Another unmanned aerial vehicle (UAV) has been added to the inventory of the Turkish security forces.

Delivery and course completion ceremony of Bayraktar Akıncı, a long-endurance unmanned combat aerial vehicle (UCAV) developed by Turkish drone manufacturer Baykar Makina, was held in the northwestern province of Tekirdağ on Aug. 29 with the participation of President Recep Tayyip Erdoğan.

“With our unmanned combat aerial vehicle Akıncı, Turkey has become one of the three most advanced countries in the world in this technology,” he said

Erdoğan expressed hope that the Akıncı will strengthen Turkey’s “sincere efforts” to establish trust, peace, and justice in both the region and the world.

Underlining that Turkey is determined to become the leading country in combat drones, Erdoğan said Turkey has to develop new technologies.

The nation’s goal is to develop armed drones that can take off and land on aircraft carriers with short runways for use in missions abroad, he added.

Erdoğan also praised Turkey’s extensive use of home-sourced defense products, which in recent years leaped from 20% to about 80%.

The level Turkey has reached in unmanned aerial vehicle technology shows the success of its capabilities in the defense industry, a feat recognized by the whole world, Erdoğan said.

He added that Turkey’s principle is to present every technology that it develops for the benefit of all humanity.

Stressing that all the drones produced by Turkish defense companies are in high demand worldwide, he said new export agreements were signed with more than 10 countries, including NATO member Poland.

Several countries are waiting in line to buy Turkish drones, he said. “It is important that our national technologies contribute to the security of allied countries, but we make our decisions according to our own strategic priorities,” he added.

Pointing to a new drone test and evaluation center in the capital Ankara, Erdoğan said they have taken national production competencies in this sector to the next level.

“Thanks to all these investments, our defense industry continues to grow. But now it’s time to step up in the technologies of the future, especially in defense industry projects,” he added.

“Besides many defense industry products, Turkey is a country that has proven itself, especially in unmanned vehicle technologies. Today, the whole world is talking about the new combat doctrine that we applied in Syria, Libya, and Azerbaijan through our unmanned aerial vehicles,” he added. 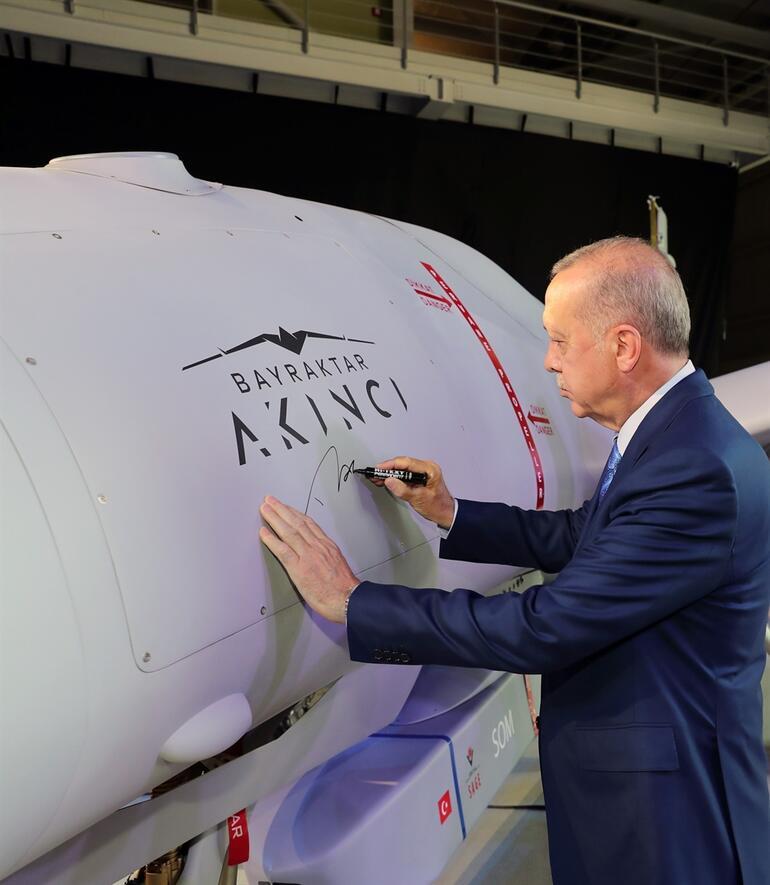 Meanwhile, Selçuk Bayraktar told reporters after the ceremony that with the experience they gained, they also worked on an unmanned warplane. He said producing unmanned warplanes has been their dream for about 10 years.

Noting that serial production of the Akıncı drone continues, he said they have produced the ninth aerial vehicle, but not all of them were mass-produced.

Contracts for exports of Turkey’s domestically produced Bayraktar TB2 drones have been signed for more than 10 countries, he said, adding that it has flown in four countries besides Turkey.

“Since Akıncı is of course a much more strategic platform, it attracted much more attention when we first started designing it and in the later stages. First of all, we said that we would evaluate those demands by completing our own production, perfecting the aircraft, and making it ready for mass production,” he said.

“There is also a serious demand for the Akıncı since it is a very rare aircraft in a higher class,” he added.

Underlining that the Akıncı will be used in more strategic missions, he said: “It can carry a much wider range of ammunition. It can carry all ammunition including air-to-ground, cruise missiles, air-to-air. Its mission capacity is very high.”

The Akıncı will be equipped with the locally-made active electronically scanned array (AESA) radar and air-to-air missiles Gökdoğan and Bozdoğan, and will be able to launch several types of locally made ammunition, such as standoff missiles (SOM).

It had completed its first test flight in August 2021 at the Çorlu Airport Base Command in Tekirdağ.

News regarding the UCAV’s entry into the inventory, as well as its mass production, has been closely followed by defense enthusiasts both in Turkey and abroad, thanks to the local drone magnate’s proven success with other locally made drones like the Bayraktar TB2.

This particular drone earned worldwide fame after it was operated in Syria, Libya and Azerbaijan, paving way for more export deals for Baykar.

Aerial bombardment can also be carried out with Bayraktar Akıncı UCAVs, which will reduce the burden of warplanes.

Akıncı UCAVs, which will be equipped with air-to-air missiles developed nationally in Turkey, will thus be able to neutralize air targets.