China has showcased its military air power at a national air show amid regional tensions over Taiwan and the South China Sea.

The Zhuhai Airshow is usually held every other year, but was postponed from November last year due to COVID-19. It showcases passenger planes and spacecraft as well as military hardware.

The 2021 show has a sharp focus on China’s domestic and regional priorities, taking place not long after the announcement of the new Australia, United Kingdom and United States defence pact (AUKUS).

Canberra-based University of New South Wales senior lecturer in international relations and development, Dr Pichamon Yeophantong, told the ABC the point of the air show, like any show of force, was to demonstrate how China is modernising its military forces.

“China is at the forefront of these new technologies. And what we’ve seen, increasingly, is the US trying to catch up to China,” she said.

“It also speaks to China’s fast advancing space program and its broader ambitions in that regard.”

China showcased a prototype of the CH-6 long-endurance drone, capable of reconnaissance and strike operations, as well as the WZ-7 high-altitude surveillance drone.

Flying demonstrations included a smoke-trailing display by J-10 fighters from the Bayi aerobatic team, while China’s newer J-20 stealth fighter — which made its debut at Zhuhai in 2016 — roared above dignitaries, with domestic rather than Russian-made engines for the first time, state media said.

The Singapore-based defence editor at Janes, Kelvin Wong, said the scope and scale of “high-end, war-fighting capability” that was on display was “definitely a step-up from previous shows”.

Elsewhere, the Global Times said the aircraft could carry missiles and could conduct “electronic jamming or deception”.

Analysts, including Asian aerospace and defence specialist Bradley Perrett, said the aircraft’s debut at the show appeared to signal a push to counter Western and Taiwanese defences.

“The J-16D is a special threat to Taiwan since it can attack anti-aircraft defences that Taiwan must rely on heavily in any Chinese attempt to forcibly take control of the island,” Mr Perrett said.

China claims Taiwan as its own territory and has stepped up military and political pressure to try to force the democratically ruled island to accept Chinese sovereignty.

Speaking at an opening ceremony in Zhuhai, China’s air force commander Chang Dingqiu said its officers would “resolutely defend the reunification of the motherland”.

Taiwan this month proposed extra defence spending of almost $US9 billion ($12.4 billion) over the next five years, including on new missiles, in the face of what it called a “severe threat”.

But Dr Yeophantong said it was important to remember the show was not purely sending a message to international observers, and pointed out it was not the first time China showcased its military prowess, and it was not the only country that did so.

“Beijing, to this day, still suffers from a siege mentality, meaning that it’s very prone to thinking that other countries are trying to contain China’s rise, but also contain the influences of the CCP in particular,” she said.

“But we also have to remember that a lot of the time, it’s also targeting China’s own domestic audience.”

“In one sense, it’s about creating a sense of national pride,” Dr Yeophantong said.

“But it’s also to buttress those narratives about how China is not going to back down, despite the pressures being put on it by the US and its allies.”

Another factor was the commercial element to the air show, Dr Yeophantong said, because China “has indicated that it is very keen on exporting more of its armed drone technology to other countries”. 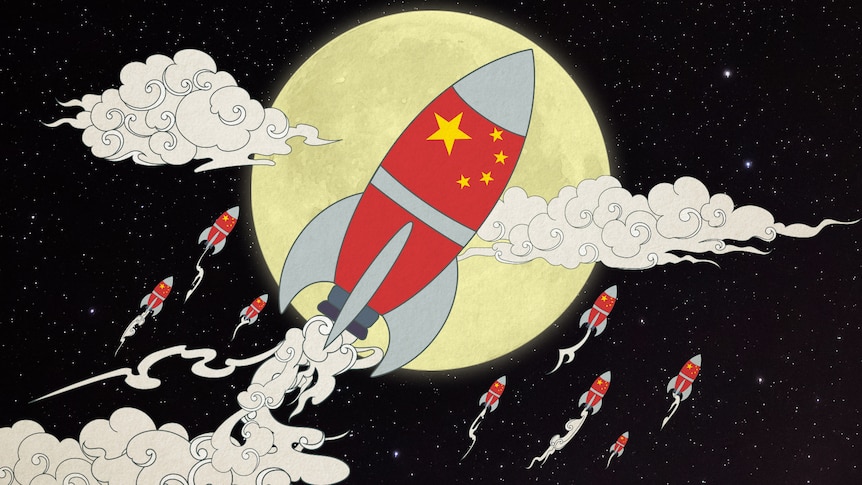 At a time of heightened political tensions between China and the West, space is emerging as an important front in the geopolitical struggle.

She said China had exported drones to more than a dozen countries — according to some estimates — and that some had been advertised as “dual use”, for civilian or military purposes.

“This has also been a major concern, as you might imagine, given that there’s still ethical questions surrounding drone technology,” she said.

Dr Yeophantong highlighted ongoing discussions about the extent to which unmanned drones could be powered by artificial intelligence as well as questions about how drones remove the human element from war, or make conflict feel artificial to pilots sitting in computer rooms operating weapons remotely.

“But Chinese exports also … [could] enable the proliferation of armed drones to other countries, some of which are politically not terribly stable countries,” she said.