Bureau Veritas (BV), a world leader in testing, inspection, and certification (TIC), has directed and supervised the testing, establishing ‘proof of concept’ and operational purpose, for remote inspection technologies and techniques, including an aerial drone, a miniature remotely operated vehicle (ROV) and magnetic crawlers, on an Oceanbulk double-skin supramax bulk carrier, built in 2008 and classed by BV.

The remote tools were supplied and operated by Glafcos Marine, a Greek technical services specialist, which has been developing and refining the marine application of these technologies for many years.

The tests were conducted under the same conditions and, to secure the necessary information, were required at an ‘intermediate’ survey for a bulk carrier of the age of the subject ship, between the second and third class renewal surveys.

The vessel was inspected during a recent call to the Neorion shipyard in Syros, Greece, for work on the stern that required a specific ballasted condition. Inspections of flooded tanks were achieved by a mini-underwater ROV, eliminating any need for de-ballasting, reducing both time and energy expense implications. Meanwhile, the holds and structure were examined by a drone and magnetic crawlers without the time and expense of cherry pickers, staging or rope access. The magnetic crawlers were equipped with ultrasonic thickness measurement (UTM) sensors and, moving across vertical and inverted planes, they provided the steadiness required for both close-up pictures and UTM readings.

Paillette Palaiologou, Vice-President for the Hellenic and Black Sea Zone for Bureau Veritas, said: “The results were impressive. The quality, resolution and detail of the imagery are excellent. We also now have a better understanding for the potential to combine, for example, drones and crawlers. We can make an initial overall survey with a drone – even in harder to reach areas, such as cross deck penetrations, as we did in this case. In addition, if closer examination is deemed necessary a crawler can be used for more detailed imagery.

“These technologies and techniques are important. They help with accuracy, speed and record-keeping in all conditions. Our surveyors and clients will increasingly be able to focus on analysing the information and data acquired – with greater safety, at greater overall speed and at less expense, rather than the challenges of acquiring what we need to know.” 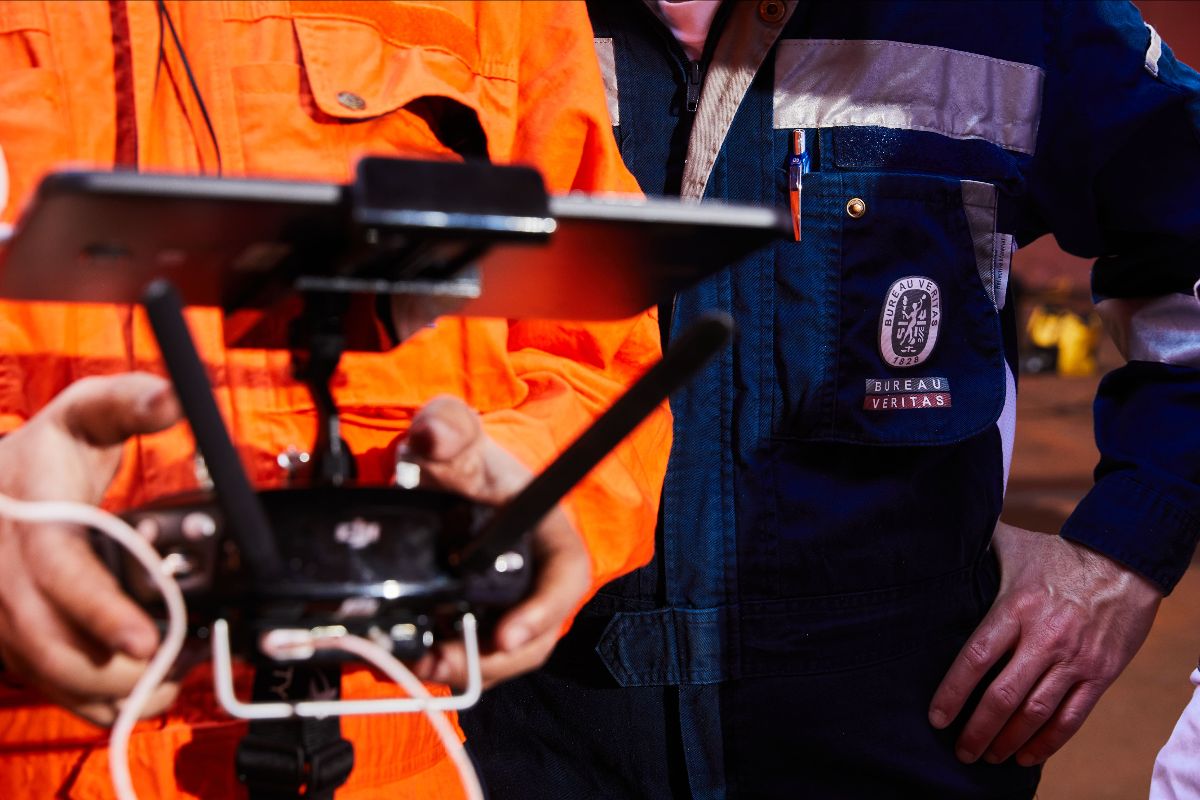 Milena Pappa of Oceanbulk commented: “In line with our ESG principles and in an effort to improve our operational efficiency and safety, Oceanbulk Maritime S.A has been actively involved in a number of national, EU and international projects including BUGWRIGHT2 which aims to offer robotic services in ship inspections. We are delighted to be part of this BV initiative and we wish to express our appreciation to those involved in such a successful test. During the tests on site, it was evident that robotic services could be a very useful and efficient tool, especially in difficult areas (upper parts of cargo holds) and during adverse conditions (full ballast tanks). By utilizing drones and ROVs, all close up inspections and UTM could be completed in a much safer, efficient and quicker way. We believe that incorporation of these techniques in class rules will boost technology further and Oceanbulk will be here to assist as much as possible.”

Glafcos Marine has participated in European Union funded projects for more than a decade trying, in collaboration with various agents in the fields of robotics and shipping (including BV), to fill the technology and regulatory gaps that still represent a barrier to a more extensive adoption of Robotics and Autonomous Systems in activities related to ship inspections. A current EU funded project called BUGWRIGHT2, under which this endeavour was exercised, aims to bring RIT technologies closer to the market.

Glafcos’ CEO, Mr Leonidas Drikos added: “BV’s initiative to organise and support the inspection on board Oceanbulk’s ship is a big step, actually the biggest so far, towards shifting ship inspections from purely human to combined human-robot execution.”

Leonidas Drikos added that BVs and Oceanbulk’s initiative is perfectly matching his vision to take humans out of hazardous spaces and hazardous jobs related to ship inspections.

Next steps envisaged are the establishment of specific regulations to be employed on board as well the related certification and training of the robotic operators.
Source: Bureau Veritas

previous
Flying Taxis Will Be Ready To Transport In Next 3 Years; 90,000+ Jobs Will Be Created! – Trak.in – Indian Business of Tech, Mobile & Startups
next
Growing Application of Drones in Military & Defense Sector