CANTON – When a dispatcher calls in a fire to Canton City Fire Department Station 1, there is a flurry of activity as firefighters gear up and rush to the trucks.

You can often find Canton firefighter Justin Deierling, 38, among them. He has gear to gather up, but not the axes and masks his colleagues are carrying.

Instead, Deierling slips into the command car with a Sony DSLR camera and a Mavic Enterprise drone in a large gray suitcase.

This is not the job he trained for at the academy, nor is it one with a precisely defined title, but it is a job he loves. He’s the department’s fire photographer, drone pilot and social media guru.

If there is a major fire in Canton or the surrounding area, you can bet that Deierling will be on the scene to take photos from the ground or pilot a drone hundreds of feet in the air to take videos.

“I just love telling their story, just preserving memories. People look back at those pictures and remember,” he said. “I like inspiring people.”

Deierling joined the department in 2014 and spent five years doing regular shift work before he was promoted to the command staff where his regular job involves overseeing the maintenance of the department’s buildings.

In 2019, another member of the command staff asked Deierling if he wanted to take over the departmental Facebook page, which needed a revamp. He said yes.

At the outset, Fire Chief K. Akbar Bennett, who was serving as the department’s second-in-command when Deierling took over the role, imagined he would increase the frequency of posts and engage more with the public, but Deierling ended up “taking it to a level I had never dreamed.”

Indeed, he took on the role with gusto. It was, Deierling said, in no small part because the job allowed him to put his passions to work.

Deierling has long been an amateur photographer, having learned with the help of “tons of books,” YouTube videos, and trial and error.

At home, he takes lots of pictures of his son Mitchell, 6, and his daughter Miranda, 3. Having their pictures taken so much sometimes annoys the kids, but his wife Megan does not mind so much.

How Deierling uses a drone with his work

Deierling applied those skills to running the department’s social media, using his own personal camera and drone at the outset.

Soon, the department bought its own drone and cameras as Deierling’s role expanded.

Now, not only does he take photos and videos of fires or the department ceremonies, he creates educational videos about fire prevention, sits on the department’s public relations committee and organizes outreach events like trips to Canton City Schools.

“What it’s done is allowed the community to get an intimate idea of what our guys do on a day-to-day basis,” the chief said.

Deierling’s journey from flying to firefighter and back again

The path that Deierling took to firefighting, much like his path to social media and fire photography, was indirect.

Having flown solo in a plane before he had his driver’s license, Deierling naturally wanted to be a pilot, but those plans changed on Sept. 11, 2001. The aviation industry cratered, and Deierling found himself behind the ticket counter at the Akron-Canton Airport, rather than behind the controls of a jetliner.

He decided he needed to change direction. So, on the advice of some friends, he went to fire school. After graduation, he worked for the airport fire department and the Greentown Fire Department before coming to Canton.

In many ways, piloting a drone for the Canton department allows Deierling to return to the dream that escaped him two decades ago.

His drone skills also have another application beyond slick videos that routinely rack up hundreds of views on YouTube and Facebook. Deierling installed infrared software on the drone that allows him to film a fire from high above and see where hidden hotspots might be. 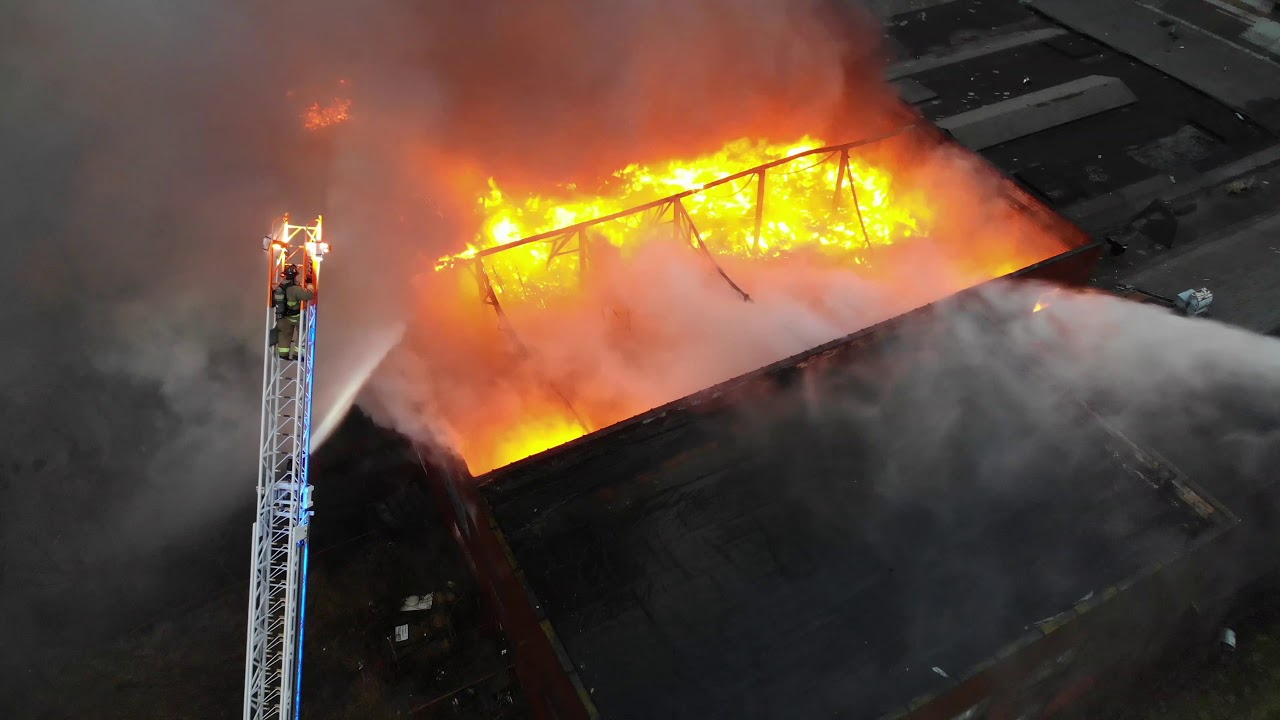 Bennett pointed to the December Weber Dental Building fire where he recalled Deierling helping the incident commander direct ladder crews through thick smoke with the help of the infrared video.

“Before we had to guess because we couldn’t exactly know what we were getting into, but he’s been able to get a bird’s eye view and been able to see where we need to put more of our tactics at,” Bennett said. “That’s an invaluable asset.”

When Deierling first started taking pictures and posting on social media, the chief said that many of the rank-and-file firefighters did not see the value.

“And now everybody to a man is so thankful for him (bringing) the day-to-day reality to life,” he said.

One part of photography that Deierling struggles with, though, is choosing a favorite image.

There are just too many choices, he said, but what comes to mind first are the photos of moments that mark the lives of firefighters: cadets making their way through the first day of training, swearing-in ceremonies, promotions and photos of department veterans alongside their children who have just joined the department.

There are also the images that capture, in the frenzy and heat of a fire, the bonds of brotherhood and sisterhood formed between his colleagues, or the photos showing an entirely different bond, that which links firefighters and the people they’ve helped or saved.

Despite the praise online and in the firehouse, Bennett said that Deierling is someone who avoids the spotlight, rarely boasting about his work.

previous
Philadelphia Man Fined More than $182,000 For Taking Pictures of the Sky
next
Gone In 65 Seconds: Pilot Error Led to $6 Million Loss in Military Drone Crash