GUANGZHOU, China — China showed off cutting-edge aircraft ranging from next-generation fighter jets to the latest drones at its biggest air show, shining the spotlight on the country’s high-end military technology amid mounting tensions with Washington.

China watchers and military experts were particularly focused on this year’s China International Aviation and Aerospace Exhibition, also known as AirShow China, as it was the first in three years due to the coronavirus pandemic.

Below are some of the highlights from the event, which took place in Zhuhai in the southern province of Guangdong over late September and early October.

A demonstration flight by a pair of fifth-generation J-20 stealth fighter jets, nicknamed Weilong, or Mighty Dragon, fired up the interest of military enthusiasts. The PLA Daily, the official newspaper of the Chinese People’s Liberation Army, even posted a video of the two-minute flight on the WeChat social network.

The PLA Air Force’s J-20 is seen as comparable to the U.S. F-22 fighter jet and Russia’s Su-57, with military experts saying it can refuel midair and launch long-range cruise missiles. The plane’s maiden flight was confirmed in 2011 and it reportedly entered service in 2017.

Manufactured by state-own aerospace company Aviation Industry Corporation of China (AVIC), the J-20 was supposed to be a next-generation home-produced fighter plane. But its initial model couldn’t be touted as Chinese-made as it switched to Russian AL31 engines after Chinese-developed WS10 engines failed to meet performance standards.

News that the J-20 had then swapped to an improved WS10 engine started filtering through in 2019. The PLAAF admitted the change for the first time at this year’s air show, demonstrating the new engine’s capacity as the two jets at the event repeated vertical ascents.

The J-20 equipped with a Chinese-made engine (left), has a saw-edged exhaust nozzle. A model plane of the older J-20, displayed at the airshow (right), has a Russian engine. (Photo by Yusuke Hinata)

However, Bonji Ohara, a senior fellow at the Tokyo-based Sasakawa Peace Foundation said the jet is “evidently” inferior to the F-22 in terms of maneuverability despite claims from China that the two are on a par.

For vertical ascent, an aircraft usually needs a power-to-weight ratio greater than one — the ratio is calculated by dividing the vehicle’s propulsive power by its weight. As the J-20 has a ratio of less than one, it makes up for the lack of power with the velocity of its straight flight and so cannot ascend vertically for a long period, experts said.

Ohara also pointed out that the J-20 needs a longer radius than the F-22 when gyrating at the same angle because the Chinese aircraft’s banking is generally shallower. The F-22 can “better turn in a small radius” at the same speed, he said. A Lockheed Martin F-22 jet turns during a flying display in Britain in 2016.

Nevertheless, an analysis of data from the aircraft shows the J-20 has steadily improved over the past few years.

The fighter flew demonstration runs at AirShow China in 2016 and 2018. Making its debut at the first of those two, many visitors were disappointed by a dull one-minute flight. Though it ascended steeply and flew in circles in 2018, gyrations were often slow and with big radiuses. At the 2021 show, the J-20 showed off moves accompanied by brisk turns in a small radius, suggesting improvements in its engine capacity. 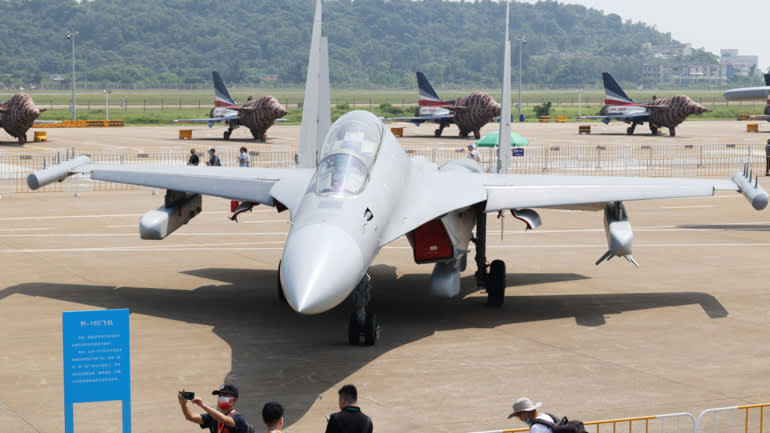 The J16D electronic warfare fighter jet was on also display this year. Its job is to detect radar and launch missiles to disrupt enemy air defense systems, and it is seen as a counter to the U.S. military’s EA18G aircraft.

Looking beyond combat jets, other military aircraft were also on show, such as transport and airborne early warning and control planes. 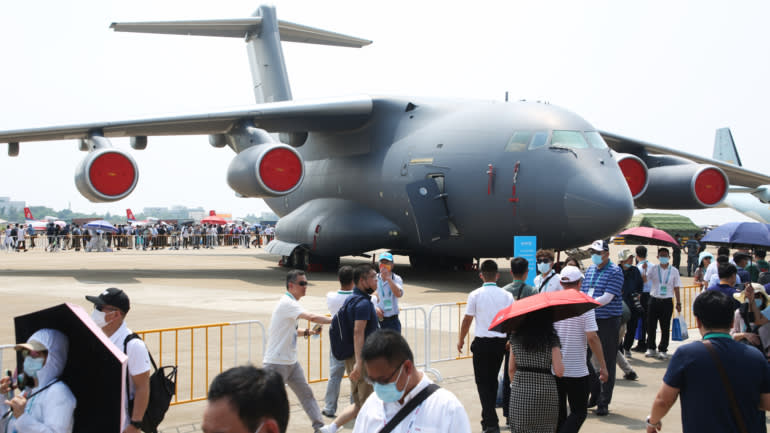 The Y-20 transport plane can be converted to different uses. (Photo by Yusuke Hinata)

The Y-20 large transport plane is of particular strategic importance for China as it can be converted for special tasks as well as quickly delivering large amounts of weapons and equipment to battlefields. For example, it can become an aerial refueling plane or an early warning and control plane.

The Z-20 is a strategic helicopter to carry soldiers to mountainous and urban battlefields without large landing spaces. A dummy model was displayed at the air show. 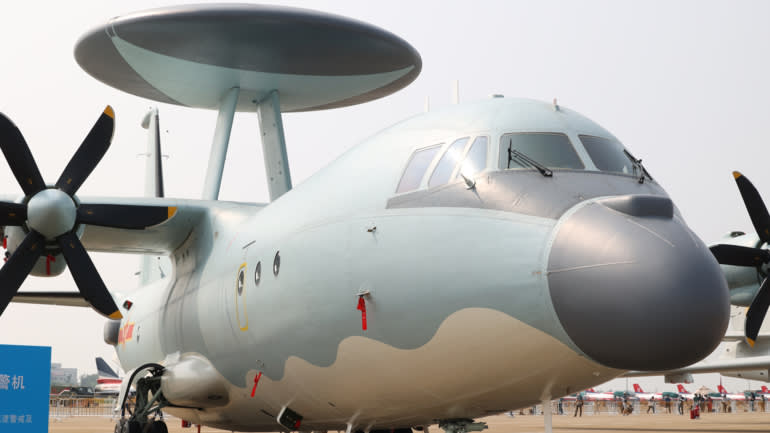 The KJ-500 is a new early warning and control plane based on the country’s larger KJ-2000. Ohara said China developed the vehicle after it failed to buy “enough numbers of Russian-made aircraft” due to “delicate relations” between the two countries.

Meanwhile, the large amount of drones at the show underscores their key role in China’s military strategy, helping make up for a shortage of manpower, capacity and experience. Drones are relatively low cost and can carry out the kinds of dangerous missions that often used to be avoided. 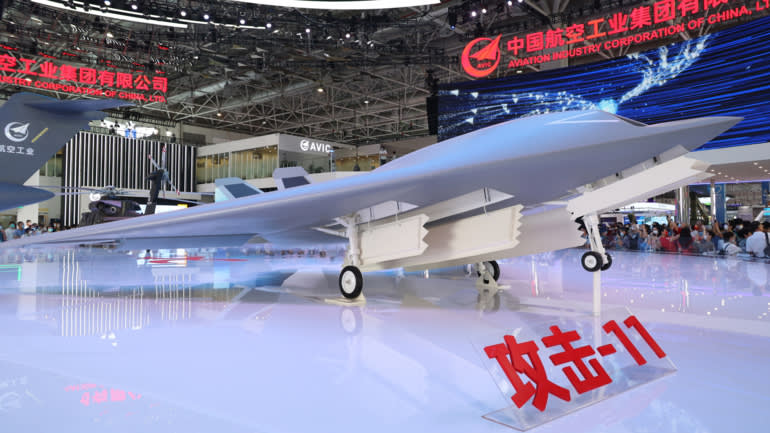 The GJ-11 is an unmanned combat vehicle which a Chinese military expert says “plays the role of kicking open the door in contemporary war.” (Photo by Yusuke Hinata) 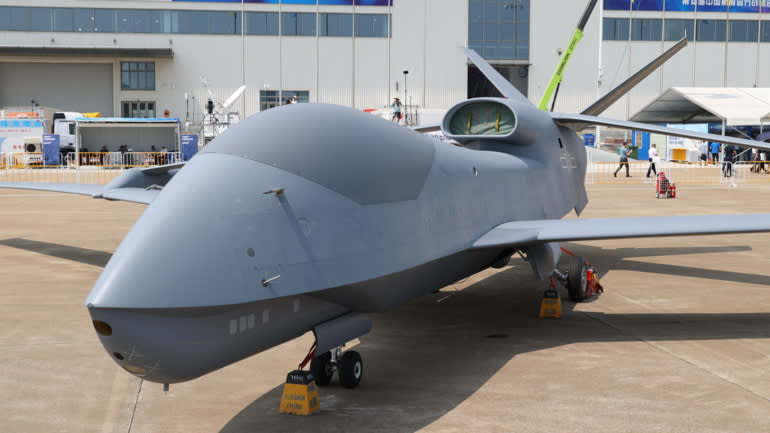 China’s military says the WZ-7 will be used for surveillance in border areas and territorial waters. (Photo by Yusuke Hinata)

The WZ-7, known as the Chinese version of U.S. RQ-4 remotely-piloted surveillance aircraft “Global Hawk,” has already been deployed by the PLAAF. But it was unveiled to the public for the first time at the latest air show.

The WZ-7 will be used for surveillance in China’s border areas and territorial waters, according to the PLAAF. Experts speculate the unmanned aerial vehicle (UAV) will fly over parts of the South and East China Seas, as well as borders with countries such as India and Afghanistan.

It is shaped like a glider to fly at high altitude for a prolonged time and has a round nose to house an antenna. That means the WZ-7, which is capable of flying at slow speeds to track moving targets, in some ways looks like a smaller version of Global Hawk. 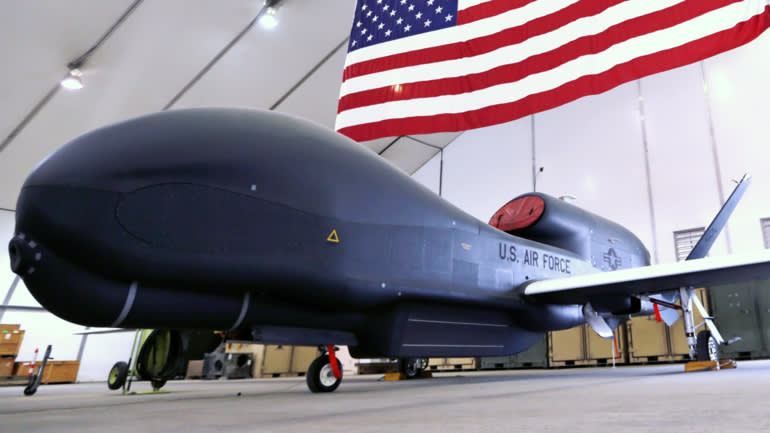 But, unlike Global Hawk, the WZ-7 has two sets of overlapping wings. This original design significantly improves ascending and descending, structural strength and stability, AVIC said, claiming that the WZ-7 has surpassed Global Hawk in capacity, although it did not give details. 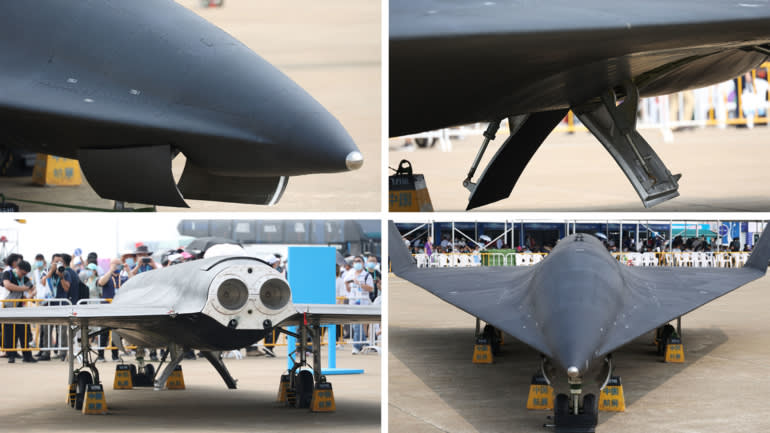 Another key unmanned aircraft on show was the WZ-8 hypersonic surveillance drone, after being revealed for the first time at a 2019 military parade to mark the 70th anniversary of China’s founding.

Powered by a rocket engine, the WZ-8 gathers information while flying at high speeds at high altitudes. Chinese media report that it has flown at Mach 6 at a height of 50,000 meters, breaking records set by the comparable U.S. SR-71 Blackbird hypersonic surveillance aircraft. The WZ-8 has a hook on top, which experts say is used to attach the drone beneath a strategic bomber so it can be launched from the air. 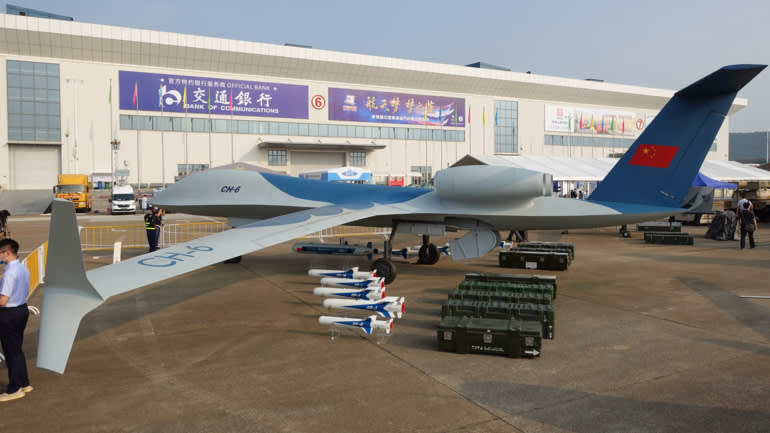 The CH-6 is a high-altitude, long-endurance drone. It has a maximum speed of 800 km per hour, according to Chinese media reports. (Photo by Yusuke Hinata) 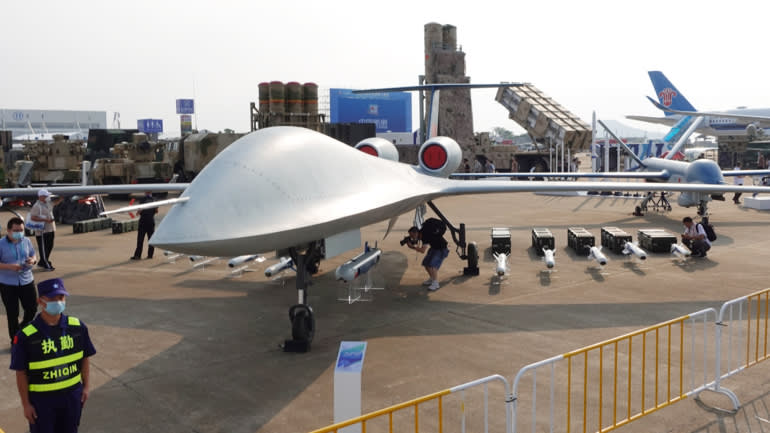 The CH-6 drone, produced by a state-owned developer of space technology, is understood to be capable of carrying 2 tons of bombs. (Photo by Yusuke Hinata)

For the first time, the air show included a pavilion of marine vessels. Among a range of unmanned combat boats, a multipurpose strategic vessel, which China calls the world’s smallest Aegis ship, drew the most attention. With a displacement of 20 tons, the ship is 15 meters long and 4.8 meters wide, and has an active phased array radar for detecting stealth jets. It is reportedly capable of firing a torpedo at an enemy submarine cruising underwater up to 8 km away. The vessel also has equipment including a vertical missile launcher. A large number of smaller drones and robots were also exhibited at the air show, amid growing speculation that such technology could play a key role in potential conflict in the Taiwan Strait.

In the Diplomat magazine in June, Franz-Stefan Gady, a research fellow at the International Institute for Strategic Studies of Britain, looked at a scenario in which China sends its military into Taiwan in 2030. He suggested the PLA would block U.S. digital communications systems to disable U.S. aircraft carriers, missiles and submarines, while using swarms of drones to attack U.S. and Taiwanese forces.

Indeed, PLA drills in May, which appeared to be focused on Taiwan, included small drones and vehicle-type robots that were remotely controlled by artificial intelligence. 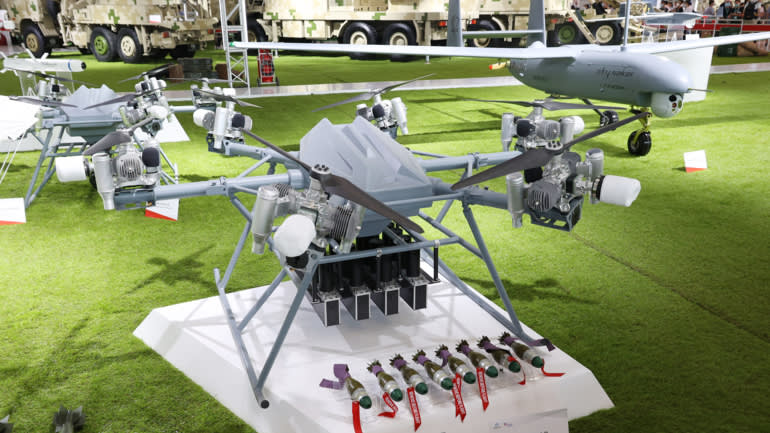 The Golden Eagle 150B Swarm drone. (Photo by Yusuke Hinata)

The Golden Eagle 150B Swarm drone is an unmanned attack aircraft manufactured by China North Industries Group, a state-own defense contractor that usually produces army weapons. As the name suggests, the drones are designed to carry out missions like a swarm of insects, with each performing its own role in coordination with the others. At the air show, the manufacturer fitted the drones with different accessories, describing them as a “small armada in the air.” 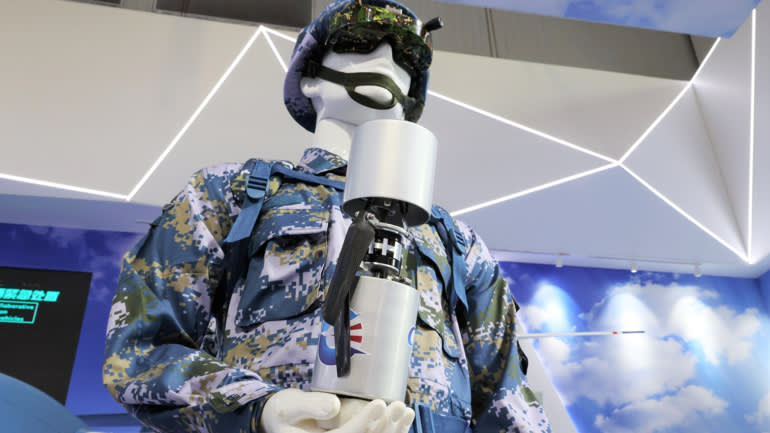 While still at the development stage, the CH-817 drone reportedly weighs 800 grams, has a loading capacity of 200 to 300 grams and is able to fly for 15 minutes. (Photo by Yusuke Hinata) 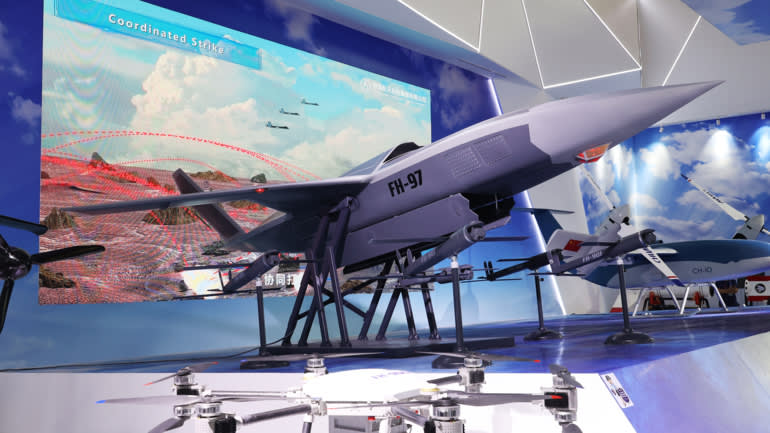 The FH-97 is a multipurpose unmanned aircraft that can drop off small drones. (Photo by Yusuke Hinata)

Drones can “integrate surveillance, assault and defense and enhance comprehensive operational capacities,” a spokesman for the PLAAF said at a news conference. The remark suggested advances in China’s research and development in the field of electronic warfare using electromagnetic technology, a new area of modern combat. That means the country could potentially block a radar system Japan is planning for aircraft such as the F-35 stealth fighter.

Even as China touts the prowess of its military technology, many details are still sketchy and the true extent of its progress remains unclear. But, while it still lags behind the U.S., it is clear China’s military buildup could drastically alter the way wars are fought.

“China is trying to integrate drones and AI in a bid to evolve toward UAVs including lethal autonomous weapon systems (LAWS),” Ohara warned. “But the U.S. and other advanced nations are reluctant to deploy autonomous UAVs as they are concerned about the ethical problems of LAWS. Under the circumstances, China is rapidly narrowing technological gaps in unmanned aircraft.”

Indeed, the air show seemed to underscore how the U.S., Japan and other nations must work out how to face China’s growing military power.

previous
Watch These 9 Movies and Shows Before They Leave Netflix in October
next
Responding to activist threats | TheFencePost.com
[contact-form-7 id=”300″ title=”Subscribe form”]