The GJ-11 combat drone model is on display at the exhibition hall of the Aviation Industry Corp of China. Photo: Yang Sheng/Global Times

Airshow China 2021’s opening ceremony on Tuesday attracted attention worldwide, with several of the most advanced China-made drones making their debuts, including the GJ-11 prototype, WZ-7 and WZ-8, which first appeared at the military parade at Tiananmen Square in Beijing in 2019, and experts said this shows China’s full confidence in its world-class unmanned aerial vehicle (UAV) technology.

The Aviation Industry Corp of China (AVIC), producer of the drones, told the Global Times in a statement that the GJ-11 is an advanced flying-wing combat UAV with strong capabilities of stealth, penetration and precision strike, and it can be used to attack enemy targets despite intense electronic countermeasures, conduct offensive air domination missions and contain hostile air defenses.

The AVIC also brought two WZ-7s to the show, with one in the exhibition hall and the other outside for public viewing. This UAV is used for aerodynamic configuration gathering image intelligence as well as tactical reconnaissance missions, according to the AVIC.

The WZ-7 uses the “Φ type” tandem-wing aerodynamic configuration, the first time that such a design has been used for aircraft in the world. This UAV has been used in all kinds of environments and its reliability has been proven, and it’s “the second drone that can freely cross civil aviation routes,” the AVIC said.

Song Zhongping, a Chinese military expert and TV commentator, told the Global Times on Tuesday that “freely crossing civil aviation routes means that the drone’s flight duration and range are as long as those of civilian aircraft. Normally, a civilian airliner can fly more than a dozen hours and more than 10,000 kilometers, so the WZ-7 can also stay in the air for more than a dozen hours and conduct inter-continental flights.”

The first drone with such capability in the world was the US-made Global Hawk, which can fly more than 10,000 kilometers, Song said. 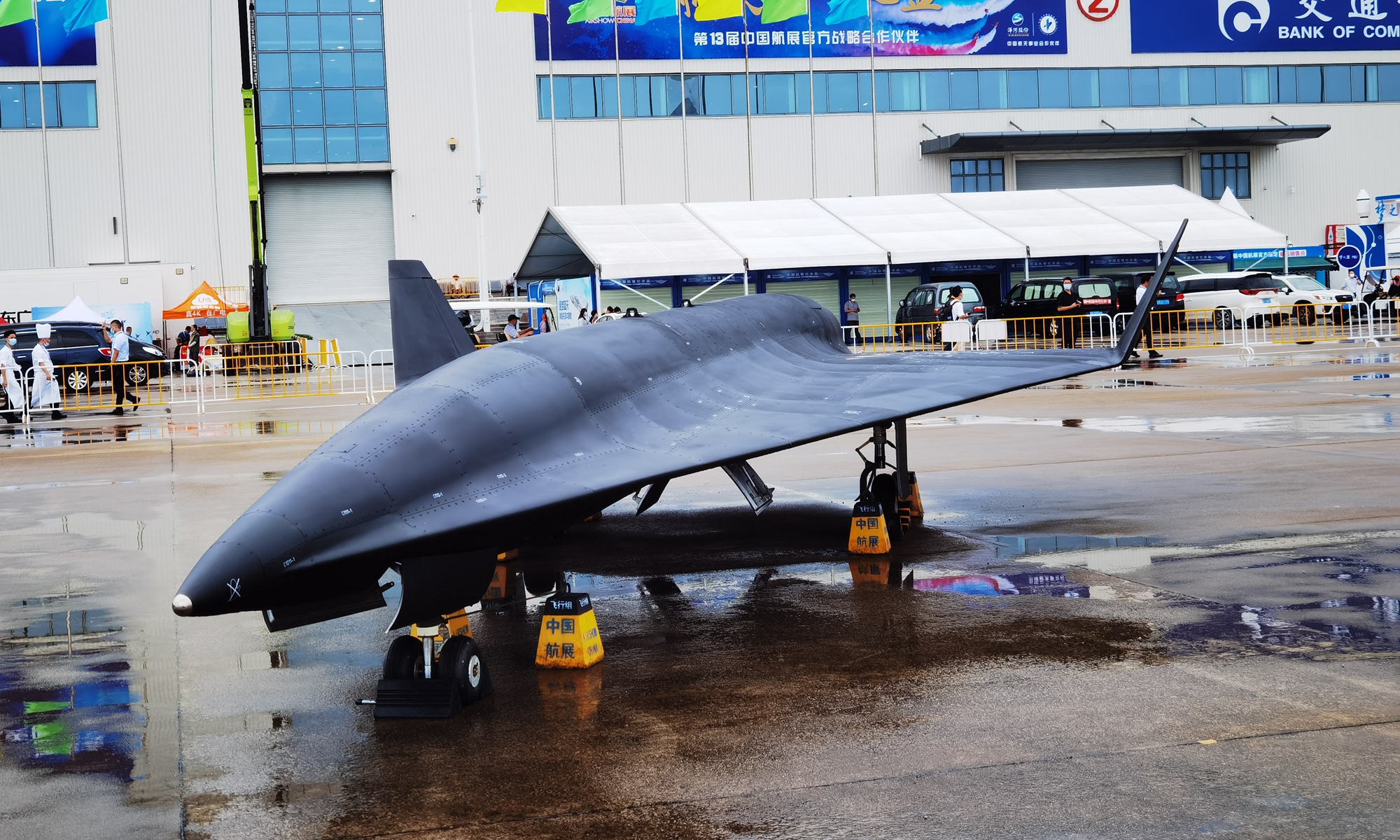 Zhang Xuefeng, a Chinese military expert in the field of aviation, said that compared with the Global Hawk, the WZ-7 has some unique advantages.

“The Global Hawk has large wings, as large as Boeing 737 wings, but it will be heavier, while the WZ-7 is lighter with a stronger lift force, so in terms of design of pneumatic proportions, the WZ-7 is better than the Global Hawk,” Zhang said.

Featuring a tandem-wing design and being large in size, the WZ-7 has long endurance, which makes completing its intended missions possible, a Chinese military expert told the Global Times in a previous interview, requesting anonymity.

The drone’s official designation is now confirmed as the WZ-7, and the PLA Air Force is presenting it to the general public at the exhibition, indicating that it has entered service with the PLA Air Force, the expert said. It was previously known by its codename Soaring Dragon.

The WZ-8 is a high-altitude and high-speed UAV for reconnaissance missions, and it’s a new near-space aircraft that mixes aviation and aeronautic technologies. This UAV can gather high-resolution images of targets under heavy defense of the enemy, and provide valuable intelligence and information for all units to conduct battle damage assessments, the AVIC said in a statement sent to the Global Times.

The drones shown outside the hall have coatings that range from light gray to dark. These models are the GJ-2, WZ-7 and WZ-8, and Zhang said the AVIC is sending a signal that China has different types of drones with all ranges of altitudes.

From low to high and further to near-space, the color of an aircraft’s coating will get increasingly dark. This is a strong signal of confidence in the field of UAV technology, experts said.