A long exposure of the launch of Crew-3 Dragon from Launch Complex 39A at NASA’s Kennedy Space Center in Florida. Credit: Theresa Cross / Spaceflight Insider

After a delay of nearly two weeks, four astronauts are on their way to the International Space Station following the launch of the SpaceX Crew-3 Dragon mission atop a Falcon 9 rocket. 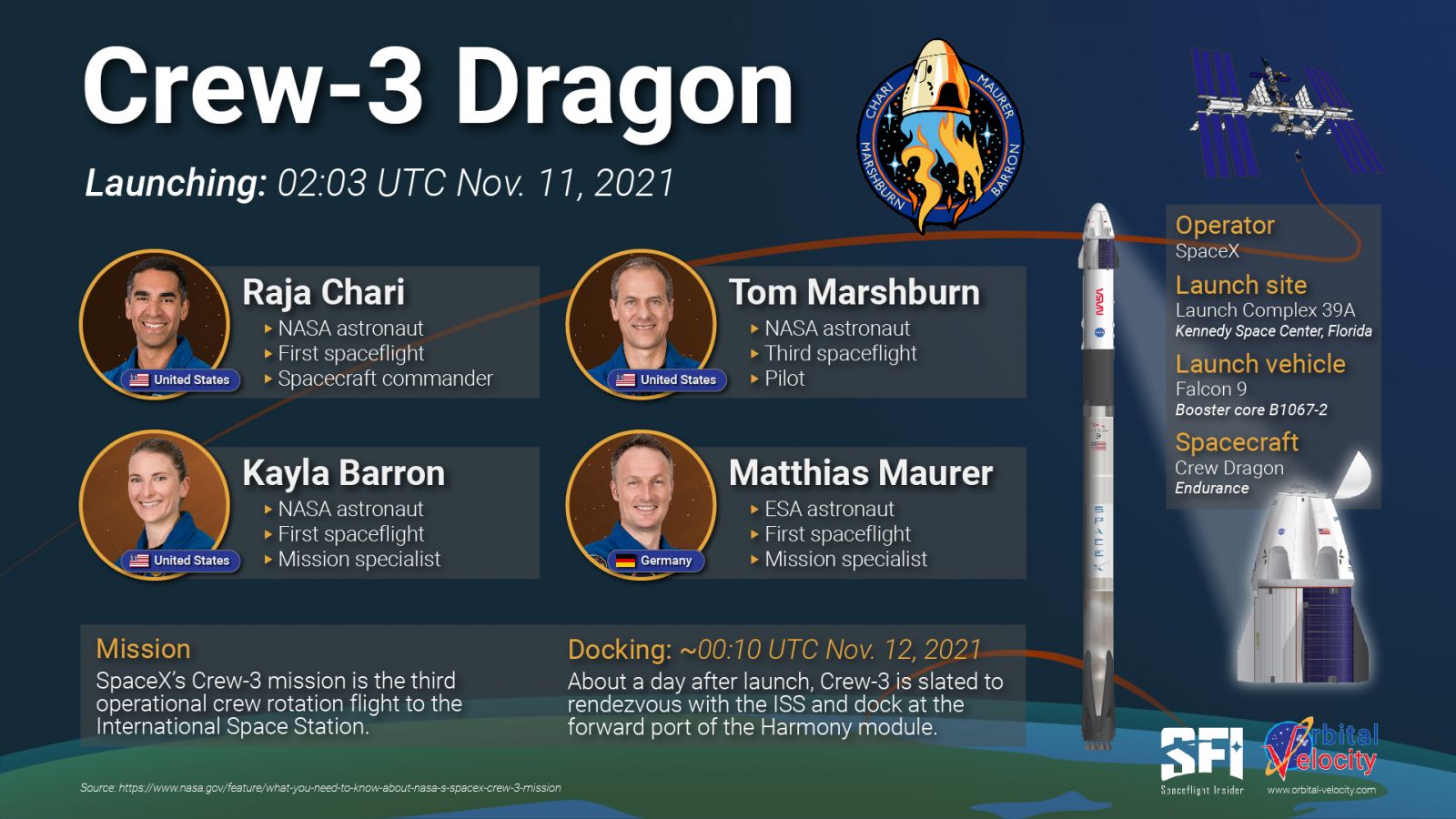 The four are set to join the in-progress Expedition 66 crew aboard the ISS, which includes NASA astronaut Mark Vande Hei and Russian cosmonauts Anton Shkaplerov and Pyotr Dubrov, for a six-month stay aboard the two-decade-old orbiting laboratory.

Launch was initially scheduled for Oct. 31, but a “minor medical issue,” along with inclement weather along the Falcon 9 rocket’s abort zone corridor, delayed the start of the mission. Originally, it was planned that the Crew-3 astronauts would perform a “direct handover” with the Crew-2 astronauts — NASA astronauts Shane Kimbrough and Megan McArthur, Japanese astronaut Akihiko Hoshide and European Space Agency astronaut Thomas Pesquet — who were aboard the ISS from April 2021 until Nov. 8.

But because Crew-2’s spacecraft, Crew Dragon Endeavour was nearing its 210-day on-orbit certification, and because finding acceptable weather conditions in splashdown zones off the coast of Florida was becoming more challenging, NASA managers opted to return Crew-2 before launching Crew-3. 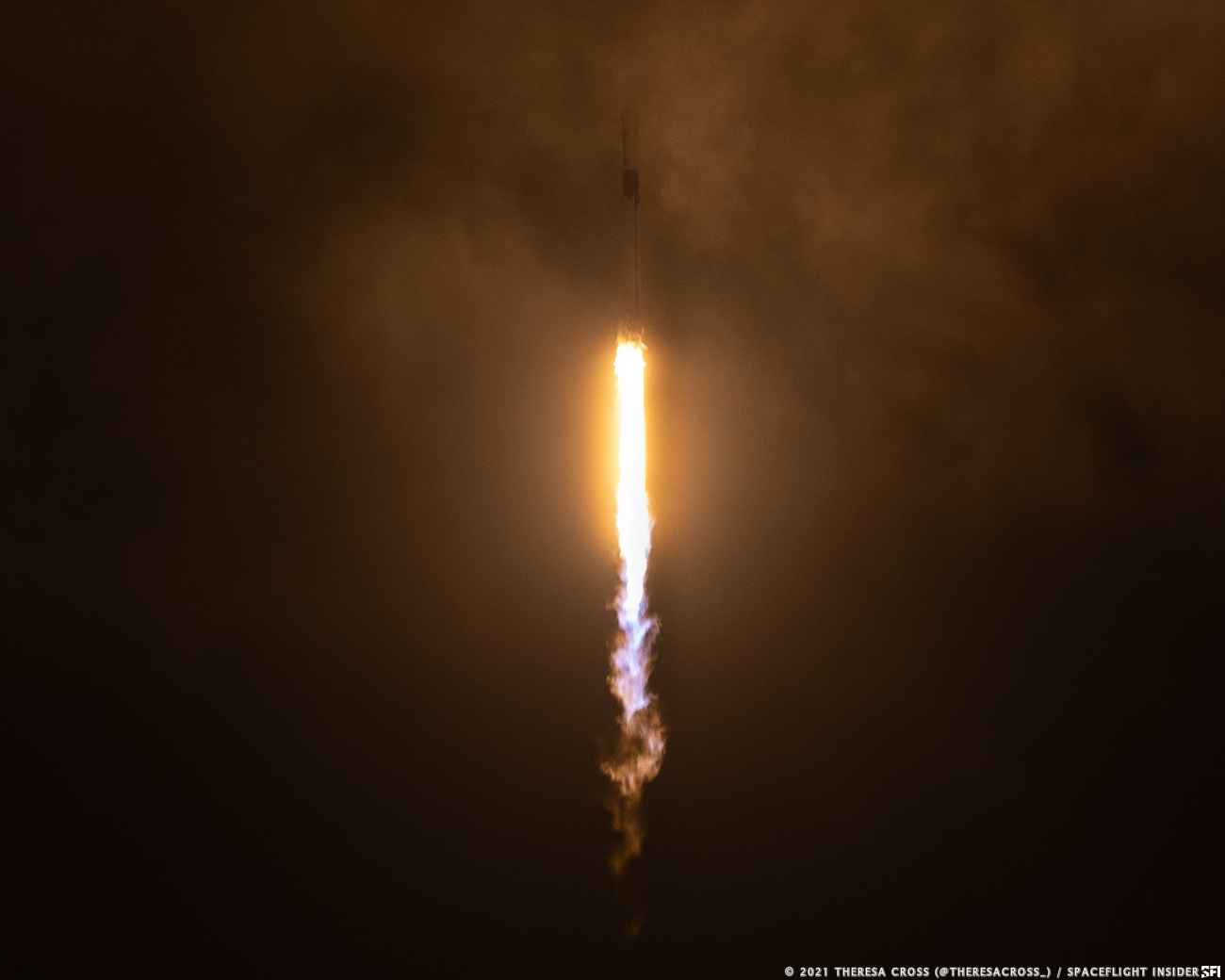 The Crew-3 astronauts are flying in a new Crew Dragon spacecraft, named Endurance. Liftoff occurred on a Falcon 9 that was using a previously-flown first stage.

Known as core B1067-2, this first stage was previously used during the CRS-22 cargo Dragon flight in June 2021. After doing its part for the Crew-3 mission during the first 2.5-minutes of the ascent, the stage landed on SpaceX’s drone ship A Shortfall of Gravitas roughly five minutes later. 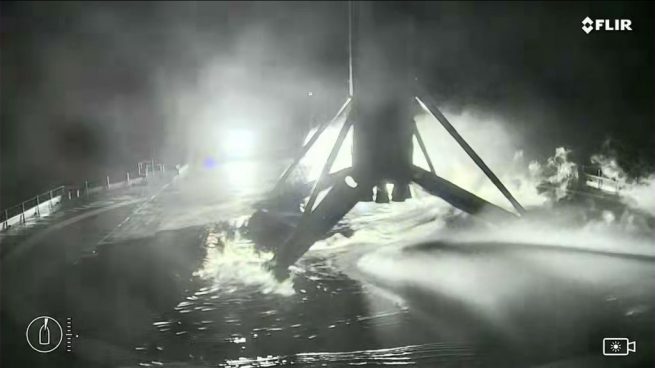 The first stage of the Falcon 9 rocket that launched the Crew-3 mission into space successfully landed on a drone ship in the Atlantic Ocean. Credit: NASA

Ahead of today’s launch, SpaceX updated some procedures based on information from previous missions that will enhance communication to compensate for radiation effects while docked to the ISS. Moreover, there are plans to implement additional cleaning techniques to help deal with foreign object debris and improve computer performance during docking procedures to help manage interference on the space station side of the connection.

During the astronauts stay aboard the International Space Station, hundreds of experiments will be executed including biomedical, material science, technology and artificial intelligence.

A food physiology investigation will study collected data from dietary improvements and the effects on overall health, gut bacteria and immune function to help support future space flights of humans living in microgravity.

Another health study to prevent muscle atrophy in space that can also result in bone loss, will use electrical muscle stimulation, EMS, to help increase the efficiency of the crew’s exercise routine of two to two and half hours of physical daily exertion.

There is also a study on board of Uniform Protein Growth, trying to leverage a quick turnaround with Crew-2, as the study aims to grow nano crystals of riboswitch RNA, responsible for switching genes off and on, to help researchers on earth better understand gene switching and its contribution to biotechnology and medicine.

Theresa Cross grew up on the Space Coast. It’s only natural that she would develop a passion for anything “Space” and its exploration. During these formative years, she also discovered that she possessed a talent and love for defining the unique quirks and intricacies that exist in mankind, nature, and machines.

Hailing from a family of photographers—including her father and her son, Theresa herself started documenting her world through pictures at a very early age. As an adult, she now exhibits an innate photographic ability to combine what appeals to her heart and her love of technology to deliver a diversified approach to her work and artistic presentations.

Theresa has a background in water chemistry, fluid dynamics, and industrial utility.