“The Air Force and the Army both, we have ongoing efforts to build counter-UAS systems,” Craig Robin, head of directed energy at the Army Rapid Capabilities & Critical Technologies Office (RCCTO), explained during a webinar sponsored by Defence iQ. “UAVs are in the threat set … they’re just not the only threat.”

Meanwhile, the Air Force Research Laboratory (AFRL) is looking to the future of DE weapons in a new paper released last Friday, Directed Energy Futures 2060. It sees promise in a broad array of future missions from AI-driven laser systems to enable machine-speed drone kill chains to space-based missile defenses (a concept that has gone in and out of fashion for decades).

Most eyebrow raising is AFRL’s prediction that DEW could be used by 2060 to create “force fields” to protect bases by repelling incoming drones and munitions — or even eventually improved to develop a kind of “nuclear umbrella.”

DoD tapped the Army to lead the the Joint Counter-small Unmanned Aerial Systems Office (JCO)last January. It is exploring numerous technological approaches to that small UAS mission, from metal ‘nets’ that tangle rotors to low-power lasers (in the 10-20 kilowatt range, Robin said.)

Current DE systems under development for countering unmanned aerial systems (c-UAS) have ranges “nearing 1 kilometer,” AFRL’s study explains, as opposed to other types of counter-UAS capabilities — such as net guns and shotguns — which are only effective at “10s of meters ranges.”

Jirjis said a continuing challenge for laser weapons, however, “is being able to hit multiple threats at one time.” (Hence, Air Force and Army interest in high-powered microwaves.)

“You can do that by linearly prosecuting them one at a time, you can get that maybe more spectrally trying to hit at multiple lasers,” he said. “I think that’s where some of the capabilities may also go, with … technologies to be able to actually meet some of those challenges.” 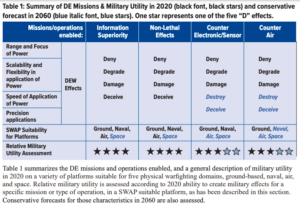 The Air Force thus is deeply involved in a “directed energy experimentation campaign,” said Michael Jirjis, former head of that campaign, but now Air Force Life Cycle Management Center’s Architecture & Integration Directorate lead for base defense. He explained that the concept is to “very quickly” test DE systems first in the US with operators, and then rapidly deploy them overseas on a “staggered” basis. A number of laser systems, he added, are “currently going on a 12-months overseas field assessment.”

“H2 was tested as part of a directed energy experiment that began in the spring of 2020 and was managed by the Strategic Development Planning & Experimentation, or SDPE, office. This experiment has involved taking commercial off-the-shelf systems and deploying them to several combatant commands, or COCOMs, for training, testing and evaluation for a one-year period,” the service said in a press release.

“Five DEWs were to be tested throughout the effort – three versions of the HELWS and two different high-power microwave systems. Four systems were tested in 2020, three of which have been deployed,” the release added.

One of those high-power microwave experiments, the Tactical High Power Microwave Operational Responder (THOR), is being developed with the Army, and is aimed at the hard problem of taking down swarms of small drones. It is expected to be sent abroad (most likely to Africa) sometime this year. after months of delay caused by the COVID-19 pandemic

But all the services are rapidly advancing on multiple types of directed-energy weapons for different missions. While DoD doesn’t release an aggregated budget for directed energy (DE) research and development efforts, a rough run through the 2022 budget justification books shows nearly $800 million requested by the Army, Navy, Air Force and DoD’s Research & Engineering office (OUSDR&E).

Robin was equally bullish on the ability to rapidly move laser systems for base defense in particular to the field. “In my opinion, here we are right now is this: the system’s … that are out there now in forward operating areas now, I think those folks are really gonna like them, and they’re gonna want more of them,” he said. The services, he said, “need to be ready to respond to that demand signal, because it is a capability for this problem that just doesn’t exist right now.”

From Star Wars To Force Fields

AFRL, for its part, sees rapid development of DEW over the next 40 years. The study looks at potential progress toward weapons based on lasers, high powered microwaves and particle beam weapons — although for the latter, AFRL says that despite years of research such weapons remain unproven and are likely to still be in the realm of science fiction even in the 2060s.

“Even with a pessimistic estimate of the advance in DE science and technology, DE capabilities will have significant military utility in the battlespace of the future, due to the unique capabilities of DE systems in terms of precision, range, flexibility, scalability of effects, deep magazine, and active probing of the battlespace across all domains and phases of conflict. Today, DE weapons are used by all major military powers for a variety of effects,” the study concludes.

For lasers and high-powered microwaves, however, AFRL sees great potential — including for future weapons systems that use artificial intelligence to identify and target enemy threats at machine speeds.

“We’re painting with broad strokes, but we’re diving into what missions of the future will look like. The technology is not quite Star Wars, but we’re getting close,” said Jeremy Murray-Krezan, AFRL’s directed energy deputy chief scientist, said in the lab’s press release.

“By 2060 we can predict that DE systems will become more effective, and this idea of a force field includes methods to destroy other threats too,” he said. “Eventually there may be potential to achieve the penultimate goal of a Nuclear or ballistic missile umbrella. It’s fun to think about what that might be in 2060, but we don’t want to speculate too much.”

The report itself is a bit more sober:

“Future trends in DEW technology will follow mission needs. The ‘holy grail’ from a military utility perspective is a DE weapon system effective enough, favorable from a SWAP perspective, and affordable enough to provide a nuclear/missile umbrella. Although a concept often associated with science fiction, in fact ground and ship-based DE defense systems effectively act like point-localized force fields against small and relatively soft targets today. Airborne and space-based DE platforms could achieve a greater area defense and multipoint defenses, for a broader coverage missile umbrella. However, these concepts require significant technical advancement by 2060 to achieve the full range of power contemplated.”