Drones are being used to carry Covid-19 test samples and other medical materials up to 40 miles (64km) across four locations in western Scotland.

Cargo – including test samples, medicine, personal protective equipment (PPE) and Covid-19 testing kits – is being transported by the drones in the Argyll & Bute region.

A whole fleet of the drones are carrying up to 3kg of the supplies each, improving services for patients and healthcare staff in one of the UK’s most remote areas.

Drones can complete a journey that takes a whopping 36 hours by road and ferry to just 15 minutes, while increasing the frequency of pick-ups.

The initiative was trialled last summer, with drones travelling between the town of Oban and the nearby Isle of Mull, but it’s now been expanded.

It’s being funded as part of a £1.1 million scheme from the UK Space Agency to fund healthcare initiatives that use space tech.

Scroll down for video

Cargo – including test samples, medicine, personal protective equipment (PPE) and Covid-19 testing kits – is being transported by the drones in the Argyll & Bute region 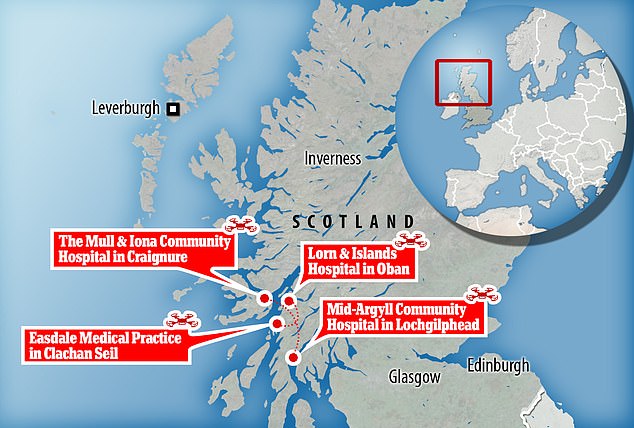 ‘This initiative is a natural progression from our recent trials with the NHS in Scotland as we scale our operations, supporting a wider network of hospitals and medical practices as they continue to respond to the Covid-19 pandemic.

‘The experience from this important initiative will put us another step closer to permanent operations from which we hope more NHS facilities could soon benefit.

‘This project underscores the viability of drone technology as a practical way to move goods.’

Within the chosen region there are some particularly remote health service locations, and many of these only have van delivery pick-ups once per day, according to Skyports.

Skyports said the current service will run until the end of April.

‘Our aim is that it is scaled up after this period, however, this is a decision for the NHS, which is looking at drone delivery as a part of its logistics mix,’ a company spokesperson told MailOnline. 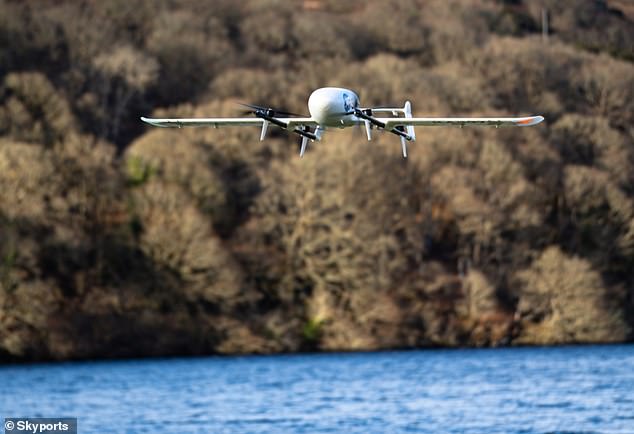 Both a scheduled service and an on-demand service will be run, with orders able to be placed by NHS staff through an online system developed by digital consultants Deloitte 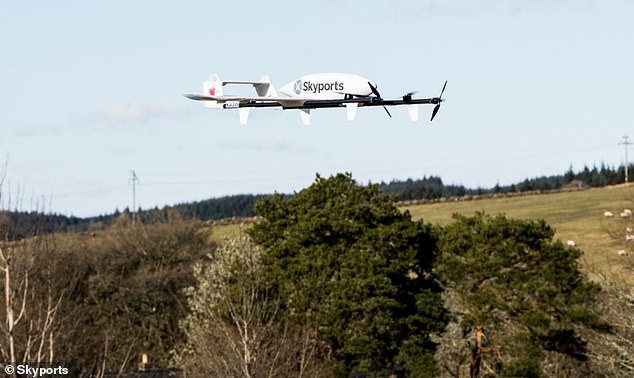 The fleet of drones will be carrying up to 3kg of critical medical samples and supplies up to 40 miles, reducing journey times from up to 36 hours for a road and ferry journey to 15 mins

Both a scheduled service and an on-demand service will be run, with orders able to be placed by NHS staff through an online system developed by Deloitte.

The vehicles will be controlled from the Skyports Operations Centre in Oban and fly automatically along predefined routes.

Communication between the drone and the ground control station will be provided by Vodafone’s 4G network and satellite communications.

Skyports found their drones cut the time it takes to get the kits between the two locations from about 45 minutes by ferry to just 15 minutes by drone.

But the firm now says combined road and ferry journeys that take up to 36 hours can be reduced to 15 minutes with drones as well. 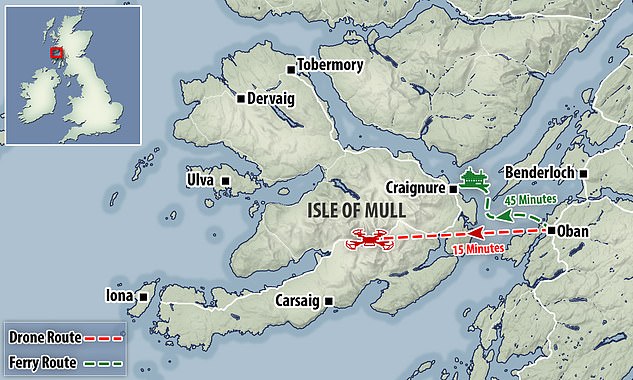 Map shows the route during last year’s trials. Skyports found that their technology cut the time it takes to get the kits between Oban and the Isle of Mull from about 45 minutes by ferry to just 15 minutes by drone 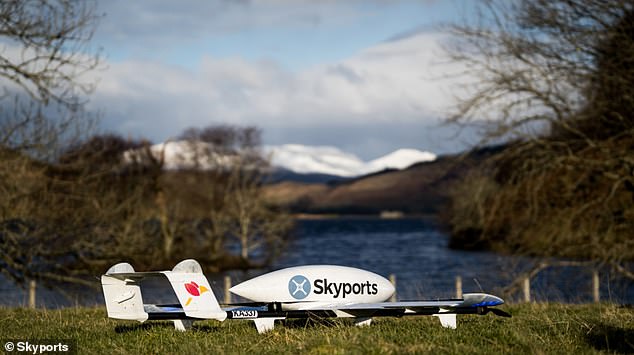 The project has been realised thanks to a £1.1 million funding agreement from the UK Space Agency last year.

This is part of a wider £2.6 million funding scheme from the UK and European Space Agencies to find ways to help firms support the NHS in its fight against coronavirus.

It isn’t just drones delivering medical supplies. A number of other projects shared in the £2.6 million of UK Space Agency and ESA funding.

This will allow voluntary organisations and local authorities to target support to those who are exposed to the impacts of Covid-19 through poverty and age. 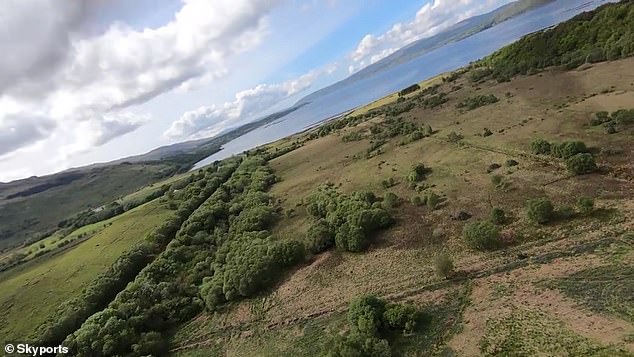 Skyports found that their technology cut the time it takes to get the kits between Oban and the Isle of Mull from about 45 minutes by ferry to just 15 minutes by drone. Pictured, drone camera footage

Stay, another of the projects to be given funding, is an app being developed to help charities supporting young people’s mental health and wellbeing.

These badges will be linked to rewards, discounts or other incentives – for acting positively, according to the space agency.

Science Minister Amanda Solloway said last year that the UK now has a world leading space sector and it is stepping up to provide innovative solutions to support the NHS.

‘The projects we are backing today show UK ingenuity at its finest, and will make a real difference to how we use this latest innovative technology to deliver critical healthcare now and long into the future,’ she said. 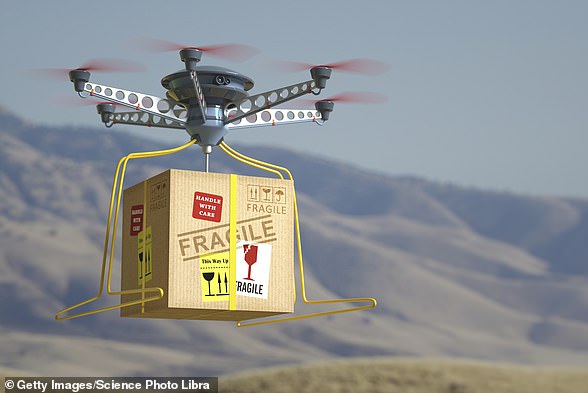 In January, the Federal Aviation Authority relaxed rules around the flying of the unmanned aerial vehicles, opening the way for large-scale drone deliveries

Skies across America will soon look very different with drones delivering prescriptions, parcels and takeout to customers in the coming months.

The Federal Aviation Authority has relaxed rules around the flying of the unmanned aerial vehicles, with small drones allowed to fly over people and at night from mid-March onward.

Previously, small drones were only allowed to fly over those who were directly operating them, unless they had received a special exemption from the FAA.

The FAA’S revolutionary new rules were prompted by the COVID-19 pandemic, according to several experts in the industry.

‘COVID-19 is accelerating the introduction of this technology across industries,’ the CEO of DroneDeploy told Axios prior to the FAA’s announcement.

Many say it is safer for drones to deliver goods to people amid the ongoing pandemic because, unlike human couriers, they pose no risk of transmitting the coronavirus.

‘The drone industry is gaining maturity at a very rapid rate, and I think society — with the right amount of education — will find itself embracing and supporting drone technology,’ Alexander stated.