Chandigarh Municipal Corporation use a drone to sanitise the Grain Market area during the lockdown; Image: Keshav Singh/Hindustan Times via Getty Images

In August, the Ministry of Civil Aviation notified the updated Drone Rules 2021, replacing the highly critiqued Unmanned Aircraft System [UAS] Rules, 2021, released on March 12 this year. With these liberalised Drone Rules, “our aim is to make India global drone hub by 2030”, said Jyotiraditya Scindia, union civil aviation minister. According to news reports, currently there are 150-200 startups in India that are part of the drone ecosystem, with drone taxis likely to be launched soon.While drones have been around for a while, it is only in the wake of the Covid-19 pandemic that its use in various sectors has been explored. In April-May 2020, drones were being used to sanitise localities, make announcements and for continuous monitoring of areas to ensure that lockdowns were being properly enforced. “Essentially, drones moved from being a ‘good-to-have’ to a ‘must-have’ technology,” says Ankit Mehta, co-founder, ideaForge, who started working on drones back in 2004, when he was studying in the Indian Institute of Technology (IIT) Bombay.

According to BIS Research, the drone market in India is expected to reach $1.21 billion (Rs 8,911 crore) in CY2021. It is likely to touch $1.81 billion (Rs 13,330 crore) by FY2026 growing at a compound annual growth rate (CAGR) of 14.61 percent, as per news reports. The new rules are expected to only accelerate this growth.These new Rules, therefore, have resulted in a lot of excitement, not just for drone startups, but also for investors. In 10 to 12 days after the new Rules were announced in August, the sector saw several investments. Drone delivery startup TechEagle raised $500,000 (Rs 3.6 crore) from India Accelerator, Vinners Group, Sitics Logistics, and angel investors. Skylark Drones raised $3 million (Rs 22 crore) in a Pre-series A funding round, co-led by investors InfoEdge Ventures and IAN Fund, with participation from AdvantEdge Founders, Fowler Westrup, Redstart Labs, IKP and Vimson Group. “Investors that were sitting on the sides almost finalising the investment, but not taking the final call, have all on a lightning speed closed funding deals in drone startups after the Rules were announced,” says Smit Shah, director, Drone Federation of India.

What do the Rules say?

One of the biggest highlights of the updated regulations is that the number of forms needed for approvals and permissions have dropped from 25 to 6. “The [UAS] Rules that came out in March 2021 were heavy on compliances that were not implementable. The new rules have done away with the redundancies and made it far more feasible,” says Mehta.According to the Rules, there is “No requirement of certificate of airworthiness, unique identification number, prior permission and remote pilot license for R&D entities”, which is another advantage for startups. Earlier there was no such provision, but according to Rishabh Gupta, co-founder of Bengaluru-based Redwing Aerospace Labs, this new provision allows companies to experiment on different types of drones. Gupta reckons, “The idea here is to give more autonomy to the industry, to allow us to experiment. Experiments always involve failure and we want to be able to fail. The earlier regulations did not allow that, but the new set is a lot more forgiving.”The coverage of drones under Drone Rules, 2021 has been increased from 300 kg to 500 kg, making it far more inclusive, and it also covers drone taxis. All licenses and registrations will now be done in a time-bound manner via the Digital Sky platform. This platform will include an interactive airspace map with green, yellow and red zones. Permissions are needed only to fly in the yellow and red zones.”This [applying on Digital Sky] will make things a lot easier. Earlier, we had send emails out to the Directorate General of Civil Aviation [DGCA], the Ministry of Civil Aviation [MCA], and Ministry of Home Affairs [MHA] to get approvals. This [new Rules] will make a huge difference,” says Swapnik Jakkampudi, co-founder of Skye Air Mobility, a drone hardware and software platform.There is no security clearance required before any registration or license issuance. Says Jakkampudi, “In the past, when we applied for permissions for 100 hours of BVLOS (beyond visual line of sight) experiments, the security clearance was time-consuming. It took us about six months only to get clearance. Our partner organisations also had to get permissions, which took even longer.” 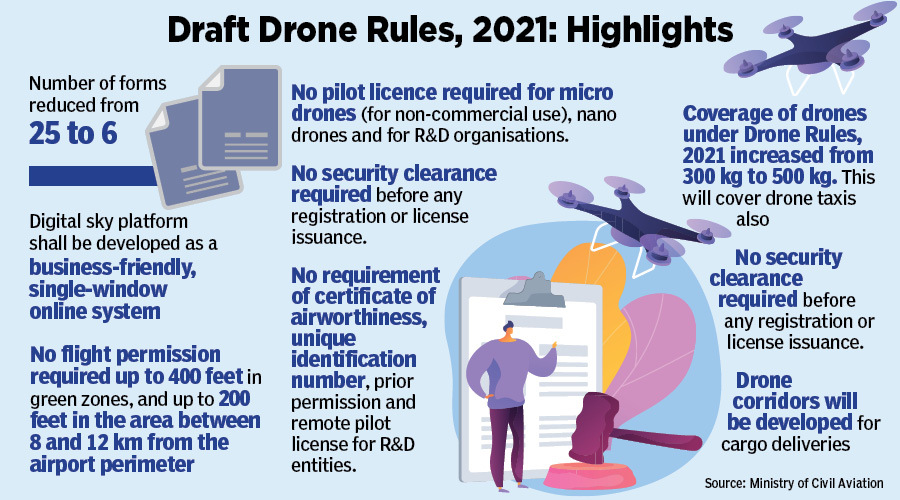 The conversations around drone policy in the country started in 2014. The first-ever regulations allowed only government entities to use drones and imposed a blanket ban on private use. Following several draft revisions, a new set of regulations was implemented in 2018. “These rules included a concept called NPNT—No Permission, No Takeoff—and also launched the online ‘Digital Sky’ platform,” says Shah of the Drone Federation of India. NPNT is currently only active for VTOL [vertical take-off and landing] drones. 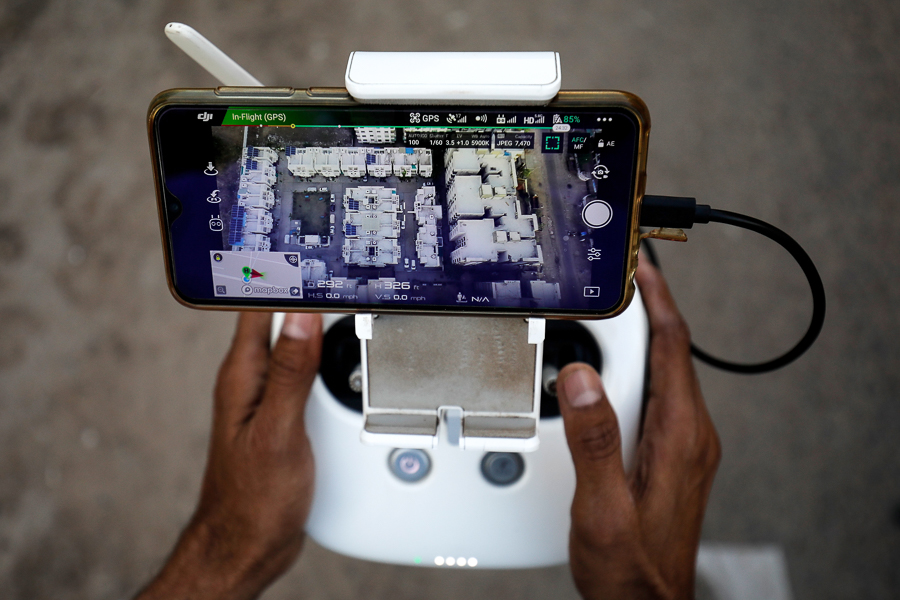 Police officers use a drone to monitor the movement of people in a residential area during the first lockdown to limit the spread of Coronavirus in Ahmedabad, India; Image: Amit Dave / ReutersBy 2020, owing to the disruption caused by the pandemic, the government revamped the regulations yet again. In March this year, the government published the UAS Rules. “To the industry’s surprise, rather than solving all the issues of 2018, they remained as it is, and there was also an increased number of licenses and permissions that were that were required for each type of activity,” says Shah. There were more than 25 licenses and permissions that were required as part of UAS Rules, 2021. These norms got a lot of critical feedback from the industry. Adds Shah, “The government changed its view from looking at drones as a security threat or concern to realising the economic potential and strategic benefits that drones can bring in for India.” In four months, the UAS Rules, 2021, were repealed.The March 2021 regulations looked at drones from an aviation standpoint, wherein every activity needed permissions and licenses. With the new Rules, Shah says, drones have been “brought closer to the consumer electronics and the automobile sector and not the aviation sector”.

What More Needs to be Done?

According to Shah, the regulations are brief and open-ended. “This means there is a scope to create sub-regulations or sub-processes, to handle different types of drones, be it an air taxi or a 5 kg drone.” However, though the regulations are simple and will help the sector grow, there might be other issues that need more clarity. “For instance,” says Shah, “there will be relaxations needed when it comes to drones being transported via roads or railways.”
Currently, the Rules state that import of drones and drone components are to be regulated by Directorate General of Foreign Trade (DGFT). However, India is currently the third-largest importer of military-grade drones in the world, with 6.8 percent of total UAV imports, according to Moneycontrol. “There is some more clarity needed when it comes to the foreign policy around drones—what happens to the newly imported drones, since 95 percent of drones in India have been imported. We need to have more inclusive policy where imports are permitted,” says Mughilan Thiru Ramasamy, co-founder, Skylark Drones, an enterprise drone solutions provider, founded in 2015. Industry experts also believe that India is still behind when it comes to drone manufacturing, and hence manufacturing incentives could also be given to startups.

Sectors ranging from ecommerce and agriculture to manufacturing and surveillance are all keen on working with drone-tech startups. While some have already been working in this space, others are exploring trials. ideaForge, for instance, focusses mainly on surveillance and mapping via drones. They have clients from sectors like ports, mining, and large manufacturing plants where large perimeters need to be surveilled. “We have been working on the Svamitva [Survey of Villages and Mapping with Improvised Technology in Village Areas] Scheme, which was introduced by the government in April 2020. As part of this scheme, we are going to map all the villages of India using drones to provide property cards to land owners,” says Mehta.Skye Air Mobility has been working with various State governments to connect primary health care centres in rural India and better the rural health infrastructure. “Ecommerce giants have also partnered with us and we are working on trials with them. In the future, customers are going to expect products to reach them a lot faster and cheaper. Ecommerce players see drones as the key solution for that,” says Jakkampudi. 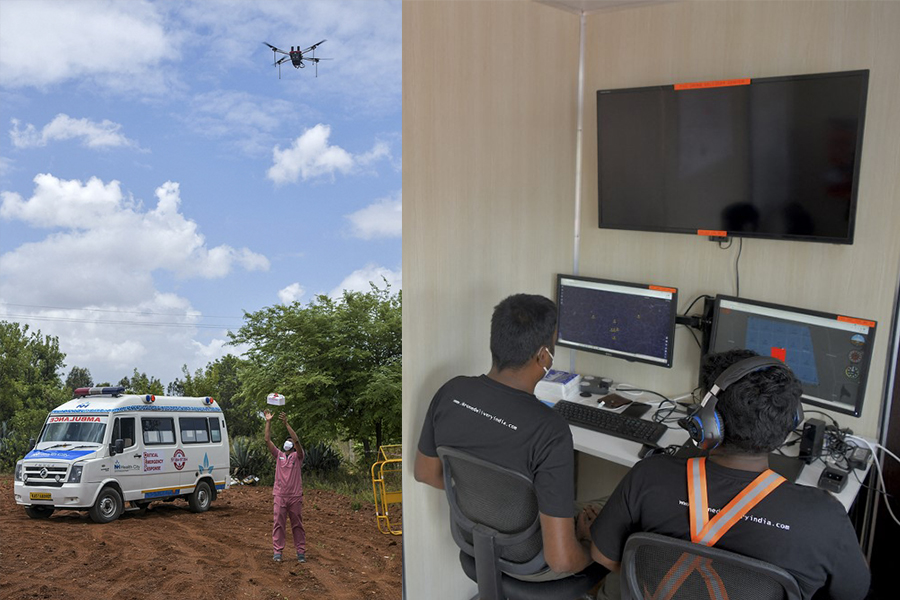 A paramedic collects medical supplies from a BVLOS (beyond visual line of sight) drone during a flight test by the Throttle Aerospace Systems (TAS) on the outskirts of Bangalore. June 21, 2021; Image: Manjunath Kiran / AFPAccording to global market intelligence and advisory firm BIS Research, the global dronemarket, which is currently dominated by US, China and Israel, will touch $28.47 billion [Rs 209,692 crore] this year, out of which India will comprise about 4.25 per cent. “The regulations will mature along with the ecosystem. Now that India has such simple regulations, it will grow a lot quicker in terms of companies being able to bring their products to market,” says Gupta of Redwing Aerospace Labs, which is currently working with the Telangana government on the ‘Medicine from Sky’ project to help deliver vaccines to remote locations via drones.This only seems to be the beginning, and a lot more startups and investors are expected to join the party soon.​

Click here to see Forbes India’s comprehensive coverage on the Covid-19 situation and its impact on life, business and the economy​

previous
Anti-Drone Market estimated to clock a modest CAGR of +29% during
next
What's the Future of Air Travel?
[contact-form-7 id=”300″ title=”Subscribe form”]