EmbraerX signed an agreement to collaborate with Elroy Air, a San Francisco-based startup working to certify a hybrid VTOL aircraft for unmanned cargo delivery. The two companies released few details about the partnership, but are expected to cooperate on technical and certification elements as well as business opportunities.

“The companies are jointly exploring ways Embraer’s expertise in aerospace systems can accelerate Elroy Air’s systems development,” a representative for EmbraerX told Avionics International. “Additionally, Embraer has a long history of certifying aircraft. Together the companies are exploring opportunities in the commercial logistics markets.”

Elroy Air CEO Dave Merrill said their hybrid VTOL, called the Chaparral, aims to transport a 300-pound payload up to 300 miles autonomously, targeting certification in 2022 via the FAA’s 21.17(b) Very Light Airplanes designation. Merrill expects the FAA to require a pilot-in-command in its first years of operation, but “there will not be a pilot onboard at any time,” he told Avionics in an emailed statement.

“The system will fly autonomously, that is the primary mode of operation,” Merrill said. “It will also permit remote piloting when/where needed, to comply with civil aviation authority rules in different regions. When being flown remotely piloted, the piloting activity will be high-level – the pilot gives direction to the system about the mission … the system will not be flown ‘stick-to-surface.’”

Elroy is also developing an automated system for the Chaparral to taxi, pick up and drop off modular cargo pods to increase throughput, demonstrated in this video. 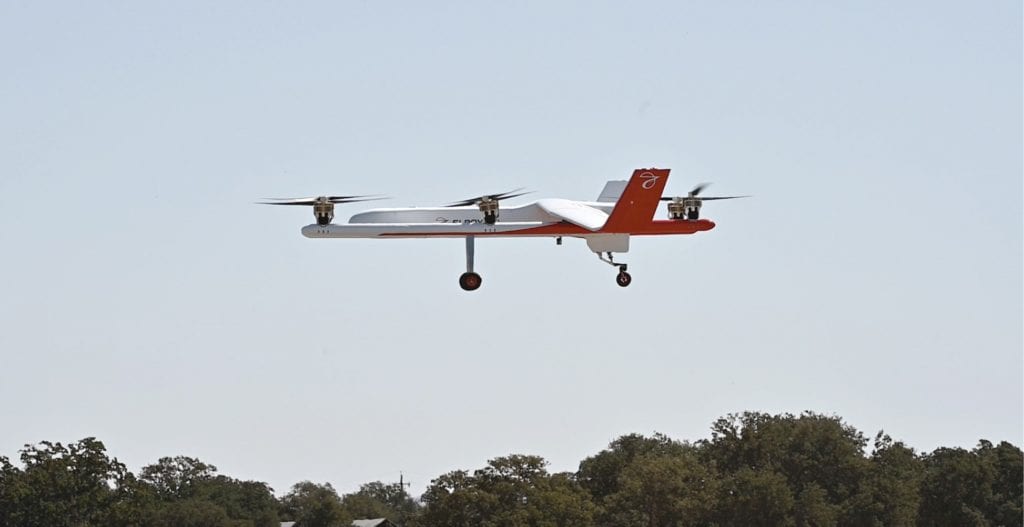 The commercial market for cargo drones like Chaparral — capable of carrying hundreds of pounds, rather than meal delivery or small Amazon packages — may reach hundreds of billions in the next few decades, and there is significant interest from the U.S. military as well, according to Merrill.

“We have participated in an invited capacity at the Joint Interagency Field eXperimentation (JIFX) event at Camp Roberts several times, and signed a [cooperative research and development agreement] with the Naval Postgraduate School in March of 2019 allowing collaboration around [concept of operations] development and range testing of our systems,” Merrill said. “In August, we won a Direct-to-Phase-2 contract as the Air Force / AF Special Operations Command recognized our advanced state of both technical and customer development in the USAF.

“Early systems will be ready for early government testing and use in 2021, and in production in 2022,” Merrill added.

EmbraerX, the Brazilian aircraft-maker’s disruptive U.S.-based subsidiary, is also developing a passenger-carrying eVTOL concept it calls ‘DreamMaker’ as part of Uber’s Elevate ecosystem, though EmbraerX hasn’t shared any details about that project since announcing it last year. The subsidiary’s status as part of Embraer will not be affected by the pending Embraer-Boeing commercial venture, the company confirmed to Avionics.