Existing buildings and facilities at the site, which is also a regional airport are being renovated and converted to serve the purposes of research and testing better at the site. The commercial-side of the airport is planned to reopen on a smaller scale from August 2021.

During the remainder of the year around 60 engineers and technical staff will also be recruited.

Test campaigns for the first projects are already taking place in Cochstedt, with final flight testing for DLR’s City-ATM (Air Traffic Management) research project planned to take place during the summer. For the final City-ATM flight campaign several drones will fly together with approximately 100 virtual drones to recreate a complex air traffic scenario. 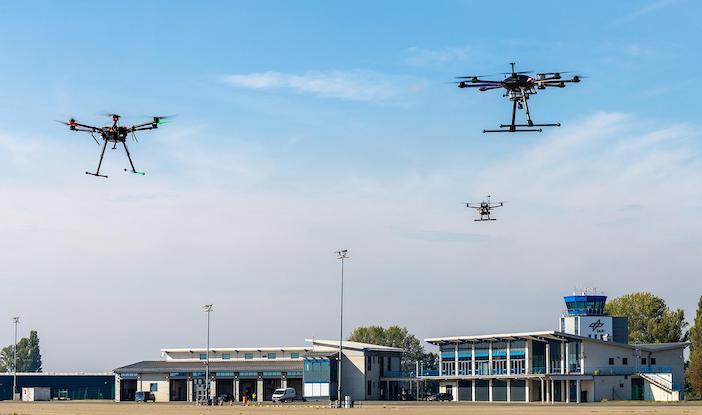 DLR’s SuperARTIS in flight (top) and drones flying as part of the City-ATM project (Image:DLR)

Future activity at the Cochstedt UAS center is expected by DLR to include the testing of aircraft demonstrators, propulsion systems and energy storage technologies, R&D projects about the integration of UAS into civil airspace, as well as UAS certification and approval programs, particularly with regard to noise, safety and environmental impact.

The site will be accessible for users ranging from startups through to established air transport industry companies for research and testing. It will also have an incubator and enabler function for startups and SMEs. For licensing reasons, it is necessary that new unmanned aircraft systems are tested and qualified under realistic conditions in a controlled environment.

Anke Kaysser-Pyzalla, chair of the DLR executive board said, “This is where DLR’s capabilities and expertise in the field of Unmanned Aerial Systems are concentrated.

“Technology development, certification and work on new regulations will determine the cooperation with our partners from industry and public authorities. Science and research thus form the basis for new air transport technologies.”

Thomas Jarzombek, the German federal government coordinator of aerospace policy said, “Numerous high-quality drone manufacturers are already based in Germany and the drone industry has become a major economic factor.

Reiner Haseloff, Minister President of Saxony-Anhalt, said, “All previous uses of the traditional airfield in Cochstedt have ultimately proven to be unsustainable. Now, with DLR’s National Experimental Test Center for Unmanned Aircraft Systems, a new project is underway and I am convinced it will enjoy long-term success.”

previous
ConnexiCore Is Supporting 2021 Infrastructure Initiatives with a New Drone Façade Inspection Partner Program
next
With Its New SkyCourier, Textron Will Try To Top One Of The Most Successful Cargo Aircraft Ever
[contact-form-7 id=”300″ title=”Subscribe form”]