Sundt, one of the largest 100% employee-owned construction companies in the country, specializes in a number of construction projects including transportation, commercial building, industrial, and renewable energy. They started using drones in 2013, when a project manager brought a personal drone to the job site to help with a project that was struggling to document progress for billing. He used the images and videos taken by the drone to demonstrate progress on the site to his clients, which improved workflows and customer satisfaction. Despite the benefits this use case proved, there was still a lot of skepticism, and it wasn’t until 2018 that drone use started to grow at Sundt.

Shortening the length of time between that initial use case and the scaled adoption of drones is a common challenge for most drone programs, which is often due to perception of drones as toys and the lengthy period it takes to get pilots and programs up to speed before businesses can see results.

“Everybody on project teams have a huge workload,” explained Miller. “They’re looking for technologies that are going to take responsibilities away and reduce their workload immediately. However, drones require a lot of work upfront, for instance, you have to get your Part 107 with the FAA and you need training. This means it takes time for drone programs to start showing results. But as more people adopt drone technology and see results, we are seeing growth in use cases and users. After years of demonstrating the benefits of drones to our project teams, we are now seeing an exponential adoption of drones into our business.”

Miller pointed out that once those programs are put in place and are up and running, almost every stage of the process can benefit from drone use from business development and research to project management and documentation. Accurate data captured in real-time via drone can help you win a job, manage and track each stage of a project, and maintain accurate in-depth records of the final product.

But even as businesses are starting to see the value in drone adoption in industry sectors like construction, there is still that lengthy ramp up period to contend with. Because most drones are flown manually, piloting a drone safely requires skill, especially when you are flying around a construction site with an ever-changing landscape of moving parts and machinery. To ensure pilots have the skills to safely maneuver in a construction site requires a lot of training, which takes time.

This is one of the many reasons why companies like Skydio see autonomous flight as the only avenue for truly scaling operations. Companies like Sundt are already realizing how Skydio is improving their workflows and enabling operations to scale in significant ways. Commercial UAV News spoke with Miller and Delepine to learn more about how Skydio is changing the construction business.

One of the initial benefits of using Skydio drones in commercial applications is the speed at which pilots get up and running, shortening the time it takes to get scaled drone programs off the ground. Sundt has been able to significantly shorten the length of time to train their pilots.

“Training new pilots on a Skydio drone has reduced our training time by nearly half,” Miller told Commercial UAV News. “This is huge. It normally takes me six to seven hours to train someone, now I can train someone in three.” 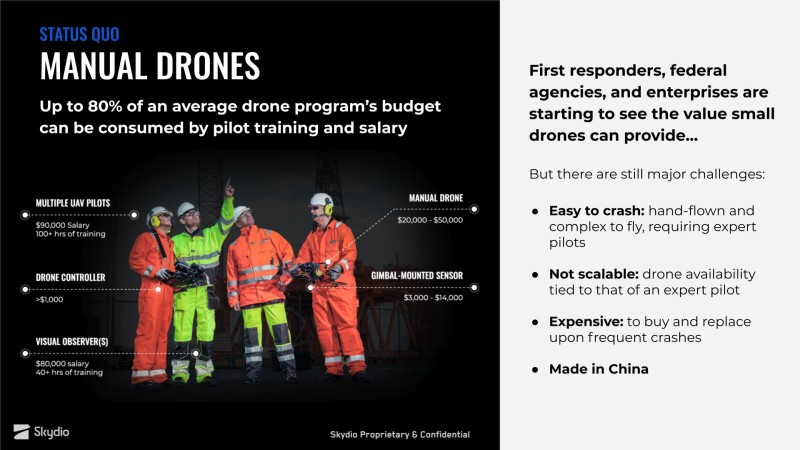 By reducing that time by half, companies can implement programs and expect to see results that much sooner. Miller reported time savings in other ways as well.

“If you’ve ever flown a DJI drone you know that they have their own no fly areas,” pointed out Miller. “Even if you have your approvals to fly by the FAA, you still have to get clearance through DJI, which can take time and can delay projects for hours or even days. Skydio trusts that the pilot has done the background work and has gotten that airspace authorization.”

Miller pointed out that flight approval delays are costly. It takes up the pilot’s time and resources and slows down any production reliant on that data. Even when the drone is cleared to fly, the setup time for most manual drones used in the construction industry is 5 to 10 minutes, whereas Miller reports 30 seconds to a minute with Skydio. A quick setup time makes the Skydio drone a tool that can be deployed at a moment’s notice.

“There’s usually a lot of startup and calibration required for most drones,” said Miller. “When time is of the essence, whether it is on a job site or you’re predicting inclement weather, those minutes are absolutely crucial. The job site is always flowing and changing, being able to capture a moment in time is essential.”

Having the confidence that you can fly and capture data at a moment’s notice changes how and when drones can be deployed on the job site, adding to their value and opening up new use cases.

On top of these time savings, Skydio’s AI and Computer vision has also made a significant difference in where Sundt can fly.

Flying Where No Drone Has Gone Before with AI & Computer Vision

Most drones are reliant upon GPS and magnetometers for navigation. Construction sites often have materials that interfere with these navigation systems. Because Skydio’s navigation is based on AI and computer vision, it can fly near objects that would normally down or confuse manual drones that rely on GPS navigation and magnetometers. Powerful computer vision and AI also enables Skydio drones to get in closer than anyone flying manually would feel comfortable doing.

“The first thing we had to do at Skydio was break the dependence on GPS and magnetometers,” explained Delepine. “To do that we had to come up with a sophisticated vision system. The Skydio is running 12 deep networks at a time, which requires a powerful chip. This is why we use the NVIDIA Tegra TX2, which is a lot stronger than the chips being used by other drones in the market. This enables the drone to process a lot of data. From the hardware all the way up through the software, there is the base of autonomy that lets you fly in ways that you wouldn’t otherwise be able to. For example, Skydio can dodge obstacles that you can’t even see in the camera feed because it has been trained to draw rational conclusions about the space around it. For instance, if it sees part of a cable, it assumes that the cable extends into space and makes maneuvers to avoid it.”

What this translates to is particularly powerful when you consider all the applications it opens up, especially within dangerous environments. For example, because Sundt gets contracted to work with high-pressure, high-temperature systems, the ability to safely fly in close quarters in spatially challenging spaces can save lives.

“With Skydio, we can get into some very tight, claustrophobic, and dangerous areas where you wouldn’t want to put a human,” explained Miller. “At Sundt we inspect high-pressure, high-temperature systems. When you use a drone for these inspections, you’re not reducing an injury, you’re reducing a death. With human inspections, the construction industry has been able to reduce the injury rate over the years, but the death rate has stayed the same—when something explodes in these environments, there is no coming out of that. Because the Skydio can fly into these areas that would be impossible with other drones and capture that data for us, we can effectively reduce that death rate. A drone is around $1,000, but a human life is priceless.”

Getting into these tight and dangerous spaces is an important feature of Skydio’s system, yet it is the data that is collected that makes it a viable and valuable tool for companies like Sundt.

“The AI that’s built into the Skydio drone is incomparable to any other drone out there,” said Miller. “The drone is basically a flying computer. Because you can get in close, you get better accuracy, which in turn enables you to create better maps. Because they’ve partnered with DroneDeploy, the processing times to create orthomosaic maps or 3D models are shorter than any other drone on the market. It really helps to expedite the process from flying the drone to providing deliverables to your project team, which is appreciated by a lot of our project managers.” 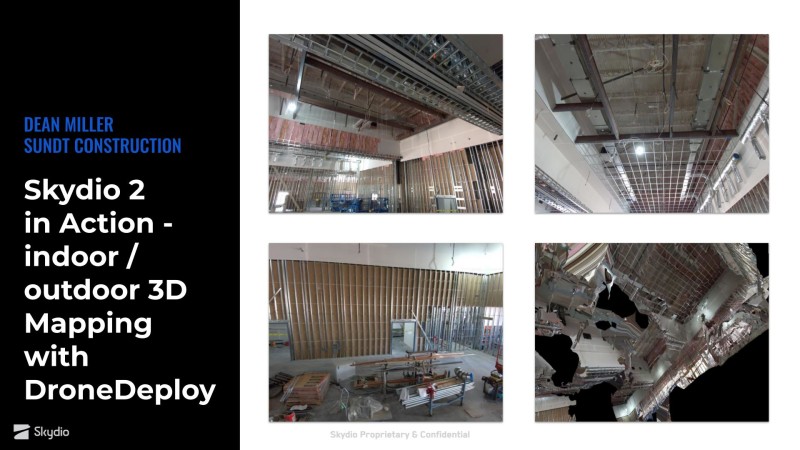 Because the Skydio can get in closer to objects, this also means companies can save money by not having to invest in expensive high-end zoom cameras, while still getting the high accuracy and quality needed for deliverables.

Made in the U.S.A

Because Skydio is manufactured in America, this has enabled Sundt to go after high-paying government projects that would otherwise be rejected with Chinese-made drones, like DJI. This was a key factor that led Sundt to look into Skydio as an alternative.

“Because Skydio is made in America, it is an enormous part of why we’re choosing to move forward with them,” said Miller. “As we pursue federal jobs and federal projects, the Department of the United States has determined that Chinese-made drones are no longer a viable option. If we have any of these drones in our fleet, then we will not be chosen. Even if it costs $100,000 to get rid of all of our Chinese-manufactured drones, we should see that return with one federal project. Why wouldn’t we go with a U.S. manufactured option?”

Miller also pointed out that having domestic customer support has made a significant impact on their business operations. Being in the same time zone has enabled them to troubleshoot issues faster than foreign customer support and arrive at timelier solutions.

Skydio’s drones have streamlined Sundt’s drone operations in a big way, saving them time and money, while opening up additional avenues for revenue. Because of this, they are planning on transitioning their entire fleet to Skydio drones this year. This speaks to just how much Skydio is set to change the paradigm within the construction industry. 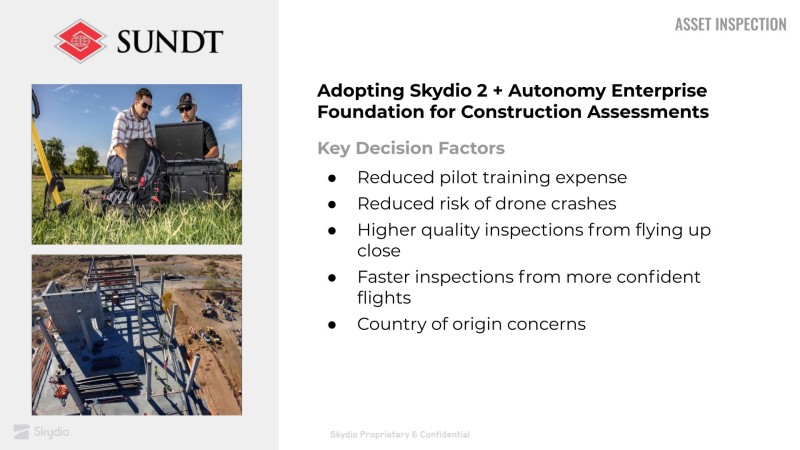 Beyond construction, the capabilities of Skydio drones are promising for many industries looking to scale their drone programs. By capturing critical, high-quality data in challenging environments and enabling drone programs to get off the ground faster, Skydio is set to disrupt multiple industries in many ways. This will only grow as highly anticipated products like 3D Scan and the Skydio X2 finally hit the commercial market.

To learn more about Skydio or about the Sundt case study you can access their recent webinar on demand here. To get more information about the Skydio X2D, check out their latest whitepaper here.