By Thomas Grandperrin of UAV-IQ Precision Agriculture. This article is part of a series on biological control and Integrated Pest Management written by UAV-IQ (www.uaviq.com).

According to Dr. Surendra Dara of the University of California Cooperative Extension, 90-95% of strawberry growers in California use predatory mites to manage two-spotted spider mites. But how did this pest control method get so widely adopted? What can growers of other crops learn from this experience?

To discuss this topic, I reached out to Lane Stoeckle, a certified crop advisor and pest control advisor (PCA) based in Southern California. Together with his father Lee, Lane owns an independent consulting business that provides field scouting, plant protection, fertility and irrigation recommendation to both conventional and organic strawberry growers as well as to a growing number of blackberry growers. 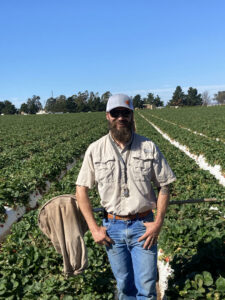 Lane Stoeckle, in one of his client’s strawberry field

In this discussion, we covered the reasons why the strawberry industry started to use predatory mites, revealed some lesser-known facts about the cost of augmentative biological control, the use of drones to release predators over large areas, and the challenge of the industry to manage soilborne diseases.

Lane explains that in agriculture, change does not happen unless there is a catalyst that prompts that change. Those catalysts can either be “push” motivated such as evolving regulations, changing environmental and/or pest conditions, or “pull motivated” such as the benefits offered by emerging technology. “In the 1980s, the go-to miticide in strawberry was called Plictran. Eventually, chemical resistance for that product built up to a point where the spray didn’t work at all. It was like spraying water.”

The primary catalyst which motivated forward-looking growers such as Richard Nelson and Tom Jones to start using the predatory mite Phytoseiulus persimilis as their main control method was the rise of chemical resistance. Later on, in the 1990s, people such as Lane’s father, Lee Stoeckle, started to widely commercialize P. persimilis in Southern California.

“It was the lack of control of the chemical option that prompted the investment and the experimentation of biological control and it worked amazingly well.”

Lane is convinced that this large-scale adoption of augmentative biocontrol will happen in other crops and that this change is already underway. “To this day, we see chemical resistance on multiple products, over and over again, because of their overuse. It causes the industry to rely more and more on beneficial predators and parasitoids.”

Because the market price of crops fluctuates, tightly managing costs is a priority for most growers. But despite a common misperception, augmentative biological control doesn’t have to be more expensive than conventional sprays – all the contrary.

Lane claims that “The cost of one application of predatory mites and the cost of one miticide application are about equal. However, what the grower is now realizing is that the predators work not only now, but for the rest of the season. Whereas the chemical option only works in that moment of time that you spray. What happens two weeks after the spray, when dust, wind and heat help a brand new population of mites to develop? You spray again. And then you spray again later. Well, persimilis are in the field head-on, meeting those new mites, preventing the need to spray five, 10, 15, 20 times in a single season.”

However, a lot of growers still have to spray for pests for which augmentative biological control protocols have yet to be developed and they might be worried that the chemicals could negatively impact the beneficial insects or mites. But that’s where a carefully designed integrated pest management (IPM) plan allows the grower to rely on natural enemies for some pests without having to remove some other useful control methods from their toolbox.

Lane addresses this concern, “We offer our growers a list of all the chemical options in strawberries, with indications on whether it’s harmful or not harmful to the persimilis. So we can control all pests, such as worms and lygus, without harming the persimilis by using selective chemistry options.”

Strawberry growers are at the forefront of drone-based biocontrol adoption

Lane mentions one of California’s struggles, as the nation’s largest agricultural producer. “There are labor shortages in multiple sectors in the market, especially in agriculture. So any time you can reduce labor through automation and technology, it’s a win for the grower.”

The problem might be even more important in crops like berries that cannot be easily picked with machines. After pioneering the use of augmentative biological control in outdoor crops in California, strawberry growers have been among the first to widely adopt innovative drone technologies to release predatory mites in their fields. 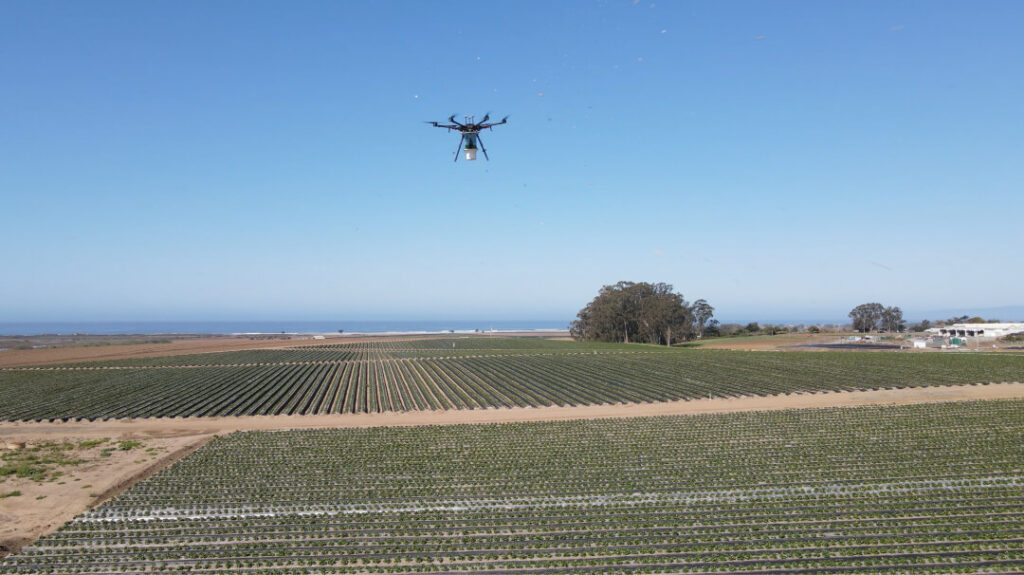 “If a grower can use a drone application instead of six to 15 field workers to release persimilis, that’s a win, because those six to 15 people can be doing other tasks, weeding, planting, cutting runners, picking fruits. Meanwhile, it takes one pilot and a drone to release at least 50 acres in two to three hours.” 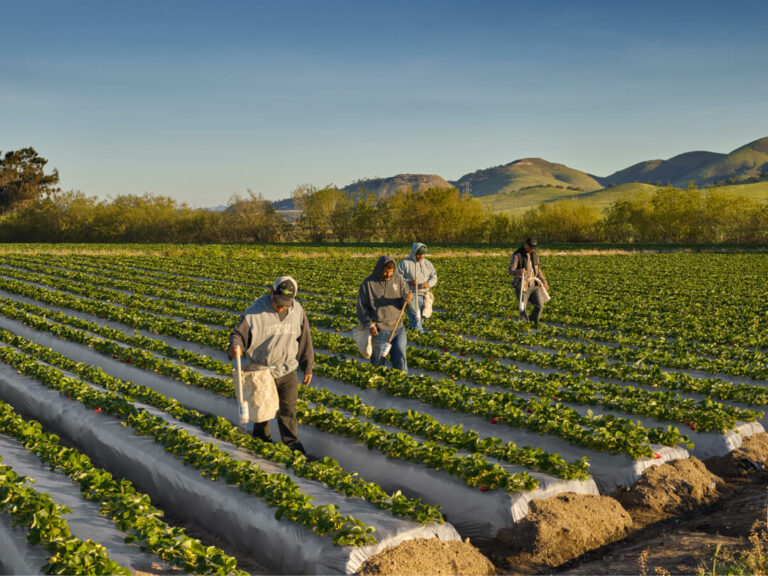 Lane points out that the benefits of drone applications don’t stop there. “If you need to release persimilis and it just rained, workers do not like to go into a muddy field. Nobody does. But how easy is it to just fly over with a drone right after rain to get the persimilis out without having anybody in the field? It’s very convenient.”

Lane believes that cost savings could be another advantage of biocontrol by drone, “Right now the cost of a crew to release persimilis and the cost of a drone release is neck and neck. But as labor wages go up and overtime goes up, the cost of a drone application could become cheaper over time compared to hand release.”

Getting ready to tackle upcoming regulations

As miticides have lost their effectiveness with the build-up of resistant mite populations, strawberry growers have almost completely replaced them by the release of predatory mites. Some other more environmentally friendly solutions are also being used for pest control, such as the use of vacuums for the management of the Lygus bugs. That said, even though the strawberry industry has found these reliable practices which also improve “sustainability’, it is still struggling to find solutions for other challenges such as finding alternatives to its long time criticized use of pre-plant soil fumigants to avoid soilborne diseases such as Verticillium wilt, Fusarium wilt and charcoal rot.

Finding sustainable alternatives “is the question of our time right now,” according to Lane. “It’s such a huge and important question at this moment. I really think that we’re at a crossroads in the industry to address this issue hand on.”

Lane comments that the industry is really starting to see the after-effects of the phase-out of Methyl Bromide, a very effective soil fumigant that was definitely banned in 2016 for its proven toxic impact on human health and the environment.

“I see more soilborne diseases popping up on fields every single year. I now see it to the point where you have two land tiers. The premium disease-free land and the second tier are lands with a known disease issue.” 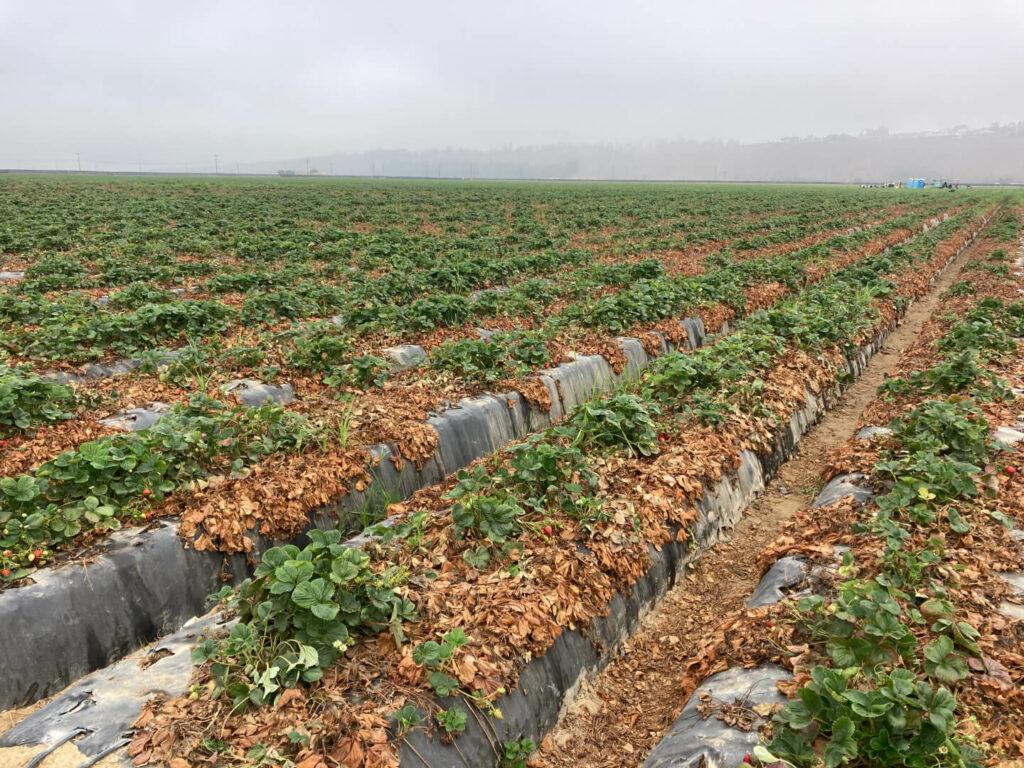 Lane believes that regulation on fumigation will keep getting stricter, which might drastically increase soil diseases. “The future of berry production and farming in California, in general, will be without any fumigation. How do you combat that? It is the question of our time, I don’t have the answer to that.”

But what Lane knows for sure is that “The way that we’ve done things in the last 50 years is starting to not work. I think it’s gonna be baby steps to implement a more environmentally friendly sustainable approach to strawberry farming without the use of soil fumigant. For better or worse, growers will have to adapt to that. Some have gone to hydroponics, some have transitioned their field to organic and are using cover crops or Anaerobic Soil Disinfestation (ASD) to suppress diseases. But I don’t think enough progress has been made on that.”

ASD is a strategy that has been studied for over a decade by University of California researchers like Carol Shennan and Joji Muramoto.

Lane has observed the adoption of some additional promising practices. He relates that “some growers now transition to barley as a cover crop because it is not a lygus host, and therefore it decreases the overall lygus population in the spring and summer. So I would say the species of cover crop is important to decrease the pest pressure as well”.

He explains that the barley stays on the field for about three to four months before being mowed down and then disked. “If a grower is moving to a new land, he will plant barley as well rather than another crop that would flower. It enhances soil health, increases the carbon and nitrogen ratio and organic matter, decreases weed growth…”

In recent years, there’s been a lot of improvements in fertigation with microbiology to enhance the soil microbes to combat diseases and enhance soil health. “The rise of bio-stimulants has been instrumental in our personal fertility program. And it’s been critical in organic production.”

To conclude our conversation, Lane encourages all growers and PCAs to try new things on a small scale. “Don’t be afraid to fail. Partner with forward-thinking companies and innovation, automation technologies. It’s going to take a massive group effort from the breeders and growers, to the experts in IPM, artificial intelligence (AI) and robotics, to name a few. Come together as an industry to tackle challenges of our time.”

The same way drone-as-a-service providers offer scalable, proven augmentative biocontrol protocols in various crops, Lane believes that, “If as a grower you could figure a way to make something work on a small scale, make it more affordable and more sustainable, chances are that someone out there in the industry will have an idea of how to make it work on a larger scale.”

Reader, we’d love to learn from you as well… What agricultural practices do you think require further research and experimentation to evolve towards more environmentally sustainable alternatives? Have you experimented with new plant health and soil health strategies in the past few years? Reach out to us and help shape our industry with your experience!

UAV-IQ is helping organic and conventional growers implement biocontrol in an efficient and cost-effective manner by using drones to release beneficial insects and mites exactly when and where they’re needed to suppress pests.