Under the agreement, IAI will convert the Boeing B777-300ER passenger planes into cargo carriers at a newly opened facility in Abu Dhabi, with the potential for the Israeli firm to “provide passenger-to-freighter conversion services to more aircraft,” according to the company.

The deal was announced on the sidelines of the Dubai Air Show, where an official delegation of Israeli defense contractors sent by the Defense Ministry is participating. Seven Israeli firms, including IAI, went to the defense exhibition in the Emirati city, one of the premier weapons shows in the world.

These developments came about a year after the US-brokered Abraham Accords established full formal ties between Israel and the UAE, followed by Bahrain, Sudan, and Morocco.

In August, IAI finalized a deal with the UAE’s Etihad Airways Engineering, the largest commercial aircraft maintenance provider in the Middle East, to establish a major facility in Abu Dhabi to convert Boeing 777-3000ER passenger planes into cargo aircraft.

IAI’s Aviation Group and Etihad said at the time that the conversion site will operate as IAI’s maintenance center in the UAE and help meet the global rise in demand for cargo jets of this model. The companies said the facility would be the largest and most advanced in the Middle East to be certified by the UAE Civil Aviation Authority, the US Federal Aviation Administration, and the European Aviation Safety Agency.

Emirates Airlines is the largest operator of B777-300ER aircraft in the world, IAI said.

IAI operates a number of existing global cargo conversion sites for Boeing 737, 747, and 767 aircraft including in Israel, Mexico, China, Italy, and Ethiopia.

Yossi Melamed, executive VP and general manager of IAI’s Aviation Group, told The Times of Israel in August that IAI began working two years ago on converting the 777 aircraft, a large-capacity freighter known as the Big Twin for its twin engines.

Work on the Emirates Airlines planes is scheduled to begin in early 2023.

“Emirates’ decision to select IAI for the conversion of its passenger aircraft to cargo configuration is a testament to IAI’s professional capabilities and IAI’s longstanding international recognition in the field,” said IAI CEO and president Boaz Levy in a statement on Monday.

Sheikh Ahmed bin Saeed Al Maktoum, chairman and chief executive at Emirates Airline and Group, said the agreement “underscores our commitment to supporting our customers’ requirements, and reflects our confidence in our future growth and status as one of the largest airline cargo carriers in the world.” 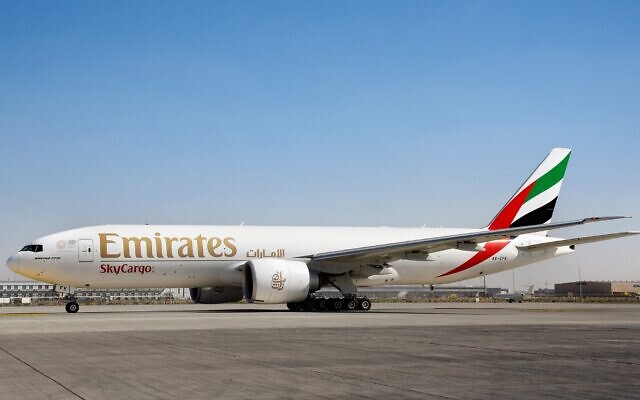 IAI has a number of ongoing projects in the UAE. In March, it announced a deal with UAE-based advanced defense technology group EDGE to jointly develop an advanced system to intercept drones and other threats tailored for the UAE market. And last July, the aerospace and aviation manufacturer entered into a collaboration agreement with Group 42, an Abu Dhabi-based firm, on COVID-19 research, marking its first official civilian collaboration with an Emirati firm.

IAI develops and manufactures advanced systems for air, space, sea, land, cyber and homeland security. Since 1953, the company has provided technology solutions to government and commercial customers worldwide, including satellites, UAVs, missiles, weapon systems and munitions, unmanned and robotic systems, and radar. The firm is one of Israel’s largest technology employers with offices and R&D centers in Israel and around the world.


Give a Hanukkah gift that enlightens

Here’s a Hanukkah gift that sparks knowledge and insight about Israel and the Jewish people.

A Times of Israel Community gift membership entitles your recipient to one full year of membership benefits, at a special discounted price.


You’re serious. We appreciate that!


We’re really pleased that you’ve read X Times of Israel articles in the past month.

That’s why we come to work every day – to provide discerning readers like you with must-read coverage of Israel and the Jewish world.

So now we have a request. Unlike other news outlets, we haven’t put up a paywall. But as the journalism we do is costly, we invite readers for whom The Times of Israel has become important to help support our work by joining The Times of Israel Community.

For as little as $6 a month you can help support our quality journalism while enjoying The Times of Israel AD-FREE, as well as accessing exclusive content available only to Times of Israel Community members.