A scene from La Brea

The tar pits of La Brea have been a thing of science and mystery, seeping and bubbling up from the ground for thousands of years right in the heart of Los Angeles.  Over centuries, the tar became a natural preserve for the bones of trapped animals, some believed to date back some 20,000 years ago.

Cut to La Brea, the new epic adventure on NBC where a massive explosion opens a gigantic sinkhole  revealing a mysterious primeval world to those who fell in, complete with prehistoric monsters.

BAFTA-nominated Visual Effects Supervisor Andy Brown had the exciting task in the pilot episode, creating the much talked about effect which splits open the earth in fissures, plunging cars and people helplessly into the abyss, where they discover they have time-traveled back to 10,000 B.C.

Brown began his creative journey attending art school in London. With a professional background in compositing and design work, he came back to his hometown of Australia working with Animal Logic, where he supervised commercials and did art direction for many of their films. With 27 years designing and directing VFX for film and television, having worked on such projects as Dora The Explorer, The Great Gatsby, Moulin Rouge, and Black Panther, to name a few, Brown was just the right man for the La Brea job,

Below The Line spoke with Andy Brown via Zoom from Melbourne, Australia, where he is still working away on five more episodes to complete all 10 for Season One. The series was actually filmed there after moving locations from Vancouver due to the Covid lockdown. Brown reveals how the first-ever sinkhole implosion in television history was created, and the conversations with the powers that be on whether or not to destroy certain key buildings in Los Angeles. He lays out  the inspiration and design for the monsters such as the saber-toothed tiger, the gigantic extinct ground sloth, mammoth bears, and wolves.

Below The Line: What are all the secrets behind creating the sinkhole in the opening episode?

Andy Brown: The creation of the sinkhole in Episode One was the main chunk of visual effects. There was a lot of planning involved in that opening sequence. Production came out to Melbourne to shoot the whole series. We had to base a lot of our shots in and around Melbourne city, but also we had to do a lot of digital recreation of that area around the tar pits of Wilshire Boulevard in L.A. to the iconic Petersen Building with the car museum. At one point we thought it would be great to put in some Ferraris or old Aston Martins just coming out of it, but we didn’t get time to do that. There was a LIDAR scan that was done of the whole area about a year ago and lots of digital stills, textures taken of pretty much every building, every street along and around Wilshire Boulevard. Those were grounded in real-life photography of the area. 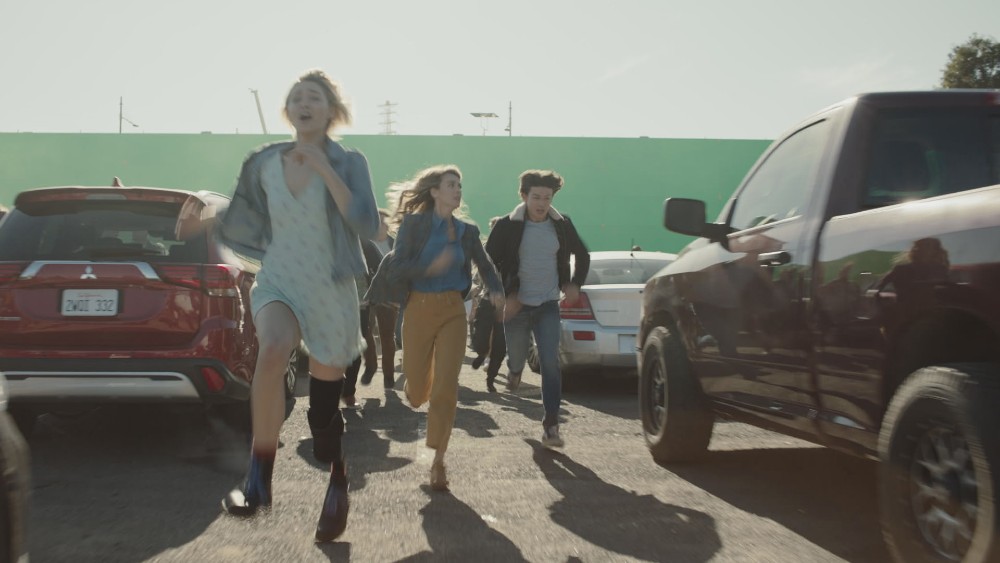 BTL: Were there any practical shots that were also designed?

Brown: There were other shots, too, where the production art department had to build this section of Wilshire Boulevard that worked for the emergency response area and for the middle of the sequence where the family Eve, Josh and Izzy run out of the car, and there’s this drone shot following them running out that lifts up to the CG extension back down towards the tar pits and the sinkhole coming towards us. You had the SB Tower building starting to crumble and fall down. The A-side of that shot was a set built next to Doppler Studios in Melbourne with a big green screen at one end.  It was all blocked out to the exact width of Wilshire Boulevard. The B-side was where we did a digital tilt, following the collapsing building down and picking up the family running towards us. 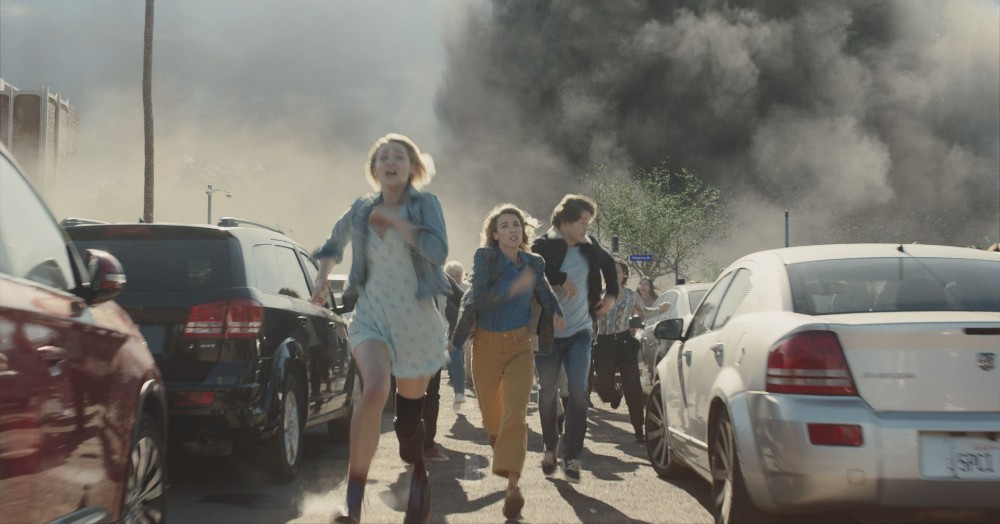 BTL: After that tremendous effect, there is an aerial view of the destruction.

Brown: There is an aerial helicopter shot that was done a year ago, which we used as backgrounds to put in the sinkhole. We had some cool effects flying down Wilshire Boulevard sort of following a couple of choppers after the sinkhole happened to the emergency rescue area.

BTL: With all the planning involved, was there ever a moment where something went wrong?

Brown: We did some rehearsals in a field near the clearing where we were shooting the set down below for 10,000 B.C. We arranged some of the cars and we had the drone guys come in and do a practice rehearsal with stunt teams in the car. It was a big drone, a pretty dangerous thing, and we’re saying, “Is this safe enough to have near actors?”  We had to make sure that it was far enough away that it was not gonna drop out of the sky or anything. There was a lot of safety. 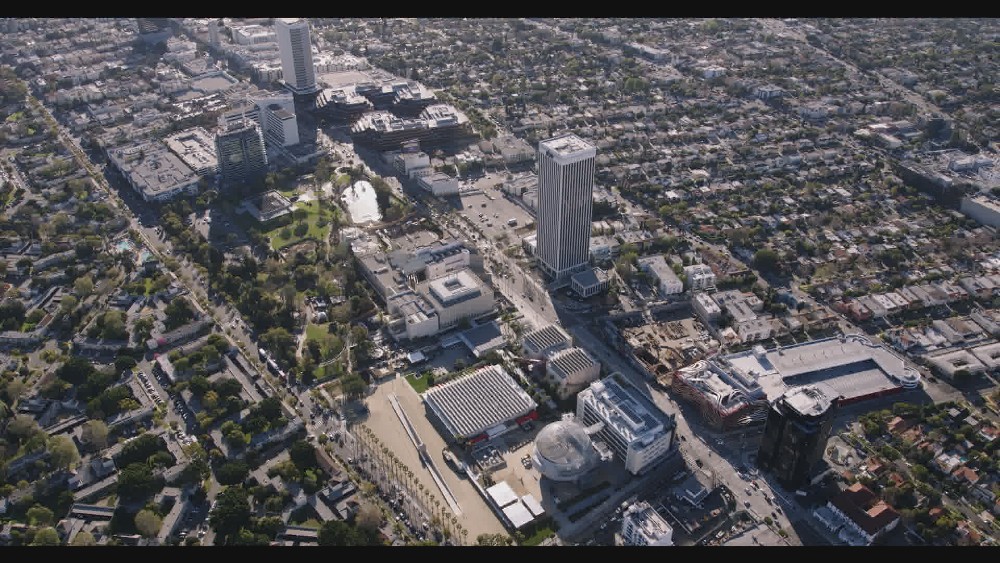 BTL: Did it ever cross anyone’s mind to hold back on the buildings that were destroyed in Los Angeles?

Brown: It’s a great project. Everybody loves destroying Los Angeles so it was a lot of fun. The CGI department loves to destroy things! We referenced some films, San Andreas was a good one to look at for destruction by earthquake. One of our producers, Bryan Wynbrandt, lives in the neighborhood and he got a little freaked out. A few of those buildings have not been demolished along that area. We had to list out all the buildings that were getting destroyed so we had to decide along that two-city block along Wilshire Boulevard which of the key buildings are gonna get destroyed. The LACMA [Los Angeles County Museum of Art] building had to be modified a little bit and not look like an art museum. There were a few others that didn’t get destroyed, like the SAG-AFTRA building and quite a lot of movie-based buildings down there. 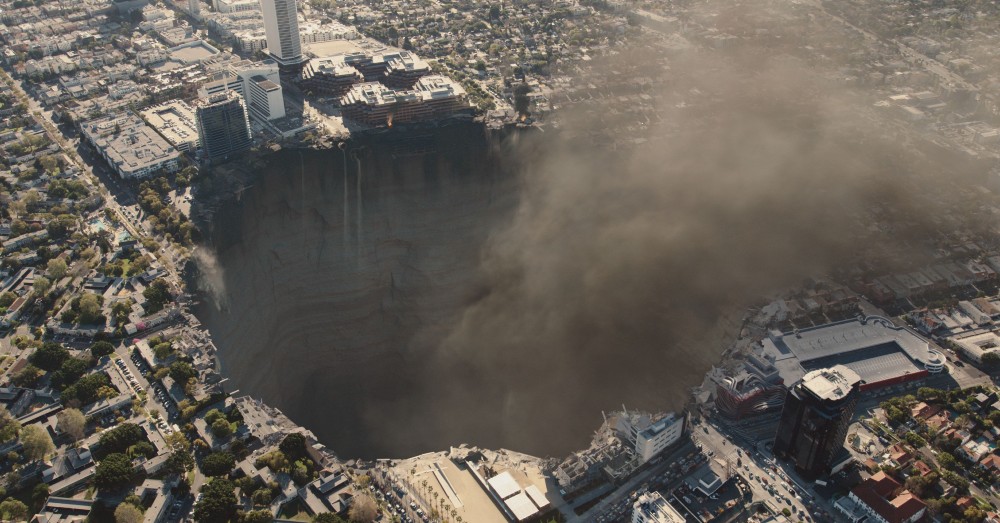 BTL: What departments do you work closely with?

Brown: We work very closely with production design, special effects, art department, and stunts. For example, with the wolf attack, you’ve got stunt teams on wire rigs getting pulled as the wolf lunges at this guy’s throat and takes it down off into the woods. That was a combination of working with stunts, figuring out what the wolf’s doing, and how fast it would take for it to drag a body off into a bush. There are lots of creative discussions with the producers.

BTL: Did you ever overlay visual effects onto something that exists?

Brown: When they find the tar pit during prehistoric times, that was a dark, boiling black tar lake that was actually shot on a small pond outside of Melbourne called the You Yangs National Park. It was private property where they shot quite a few exteriors there. In the scene, there are camels running towards it, and the actor Rohan Mirchandaney tries to stop the camels from running into it. We wanted to do it there to keep the real reflections of the world outside. So basically there’s a tar pit, but we put the real reflections back on top so it felt real. 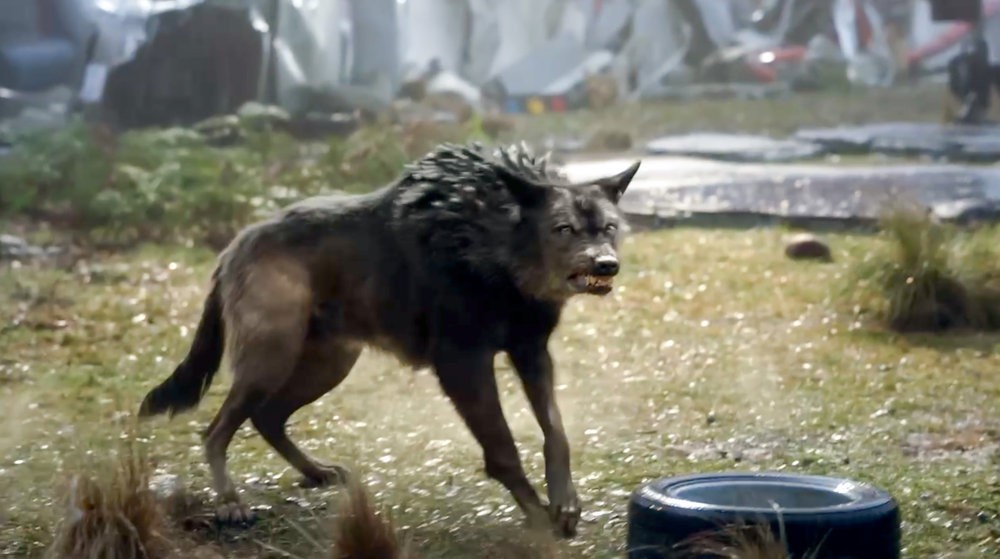 BTL: Is there a visual effect that you designed for one of the actors?

Brown: One of the actors has a prosthetic leg. Zyra Gorecki is an amputee like her character Izzy, and there are a couple of shots where she goes back in time to visit her parents in hospital. She has a real leg in those two shots. It’s very quick but it’s in there.

BTL: Let’s talk about designing the effects for the prehistoric monsters and creatures.

Brown: We have a lot of creatures, actually. We have the saber-toothed tiger, prehistoric bear, and the Ground Sloth. In terms of all the characters, there was a bit of development work done for the pilot where they focused on the birds [coming out of the sinkhole] and the wolf. We picked up on the concept work that was done for those, and then we had to do our own concept character design for the saber-tooth, the sloth, the bear. For the saber-tooth, we worked with a company called Mr. X, who did most of the creature work. Some of them were based on current-day references but the saber-tooth was looking at current-day tigers and skeletons which you can actually find at La Brea Tar Pits and Museum where a lot of these creatures seemed to have come from. We initially did design work on Ground Sloth. The bear was the easiest to match to, so we were looking at the grizzly and Kodiak. A lot of these animals needed to feel a bit ragged, dirty and hungry. The showrunners wanted to have bigger teeth on the saber-tooth. They were like, “No, no make it bigger!” It’s a great crew with the showrunners where everyone is very creative and gets to collaborate and have their say. It’s all about enhancing the story, and that’s good fun.

The first four episodes of La Brea Season 1 can be viewed exclusively via streaming on Peacock and Hulu with new episodes airing on NBC on Tuesdays at 9pm Eastern (8pm Central).

All photos courtesy NBC; click on images for larger versions.