DUBAI, United Arab Emirates (AP) — Dubai’s biennial Air Show opened Sunday to a world still reeling from the pandemic and an aviation industry hard-hit by the coronavirus, but on the mend.

Boeing and Airbus have traditionally been the stars of the aviation trade show, competing for multibillion-dollar Gulf-based airline purchases and hammering out final details minutes before back-to-back press conferences. This year, however, the five-day exhibition is expected to be much more muted than in past years due to the subdued state of flying and travel amid the COVID-19 pandemic and delays in the global supply chain that have affected plane manufacturers.

Airbus announced a deal with Indigo Partners to sell 255 new aircraft, but declined to provide any details on the price of the sale. The agreement sees budget carriers Wizz Air purchase 102 new planes, US Frontier with 91, Mexico’s Volaris with 39 and South American JetSmart with 23. The package includes a mix of A321neo and A321XLR aircraft.

The air show in Dubai is one of the first major aviation trade shows to take place since the start of the pandemic. Dubai went into a brief lockdown last year, but has since swung open its doors to vaccinated and unvaccinated travelers as it tries to lure back leisure and business spending and draw visitors to its multibillion-dollar EXPO 2020 World’s Fair site.

The tarmac outside the exhibition hall showcased the latest innovations in commercial aviation as well as the global arms trade, and the continued push by companies to sell their hardware.

Boeing brought its new 777-9 passenger jet from Seattle in the longest flight to date for the 777X as it undergoes continued tests and awaits regulatory approval. Boeing says the aircraft will be the world’s largest and most efficient twin-engine jet. The Middle East’s largest carrier, Emirates, has ordered 126 of the 777X, but the Dubai-based airline has expressed frustration with delays around its delivery, which is not expected before late 2023.

Boeing continues to face scrutiny for its 737 Max aircraft, which was grounded globally until recently following two crashes that killed nearly 350 people. Boeing had to make changes to flight software that played a role in the crashes, paid an undisclosed sum to airlines that were affected by the aircraft’s grounding and has settled dozens of lawsuits filed by families of passengers killed in the crashes.

Airbus took journalists through a A320neo, which had been converted into a luxury corporate jet replete with a large bed, walk-in shower and sprawling sitting area with couches and coffee tables.

China’s state-owned defense firm CATIC displayed a range of anti-aircraft missiles, munitions and fighter jets. Also on display is Russia’s Sukhoi Su-75 Checkmate fighter jet, which will be shown to the public later Sunday. The jet is a less pricey competitor to the US F-35, which the United Arab Emirates has been trying to acquire since formally recognizing Israel last year in a deal brokered by the Trump administration. That sale has slowed under President Joe Biden. 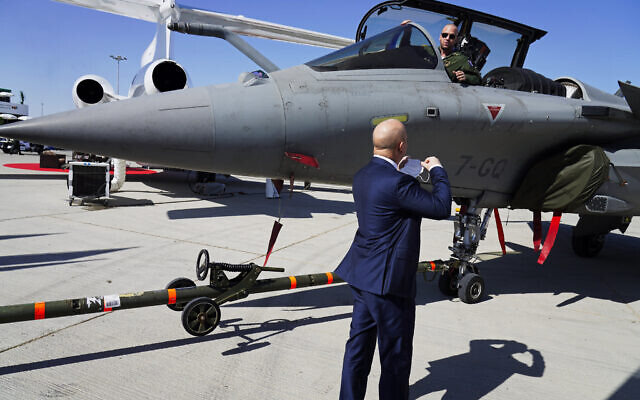 A French pilot sits in his Dassault Rafale fighter jet as it is pulled into position at the Dubai Air Show in Dubai, United Arab Emirates, November 14, 2021. (AP Photo/Jon Gambrell)

An Emirati airman inspecting a US-made Chinook CH-47 noted that the transport helicopter had been supporting Emirati forces on recent missions in Yemen and Afghanistan.

Israeli companies, meanwhile, displayed their hardware for the first time at the air show following Israel’s normalization of diplomatic ties with the UAE last year. The state-owned Israel Aerospace Industries company showed off a range of manned and unmanned naval and aerial drones.

Israel’s Rafael Advanced Defense Systems displayed its “drone dome” that detects and destroys drones with lasers. Emirati defense officials were seen asking about the range and weight of the anti-drone system at the Israeli pavilion. In all, six Israeli companies are taking part in the air show.

Defense Minister Benny Gantz described the UAE-Israel partnership as a “strategic asset,” saying in a statement that the Defense Ministry’s participation “reflects the deepening relations” between the two nations. The two countries share deep concerns over Iran, which is set to resume negotiations over its tattered nuclear deal with the US and other world powers.

The air show is taking place near Dubai’s Al Maktoum Airport, a second and smaller international hub to Dubai’s main airport, which is the world’s busiest for international travel. 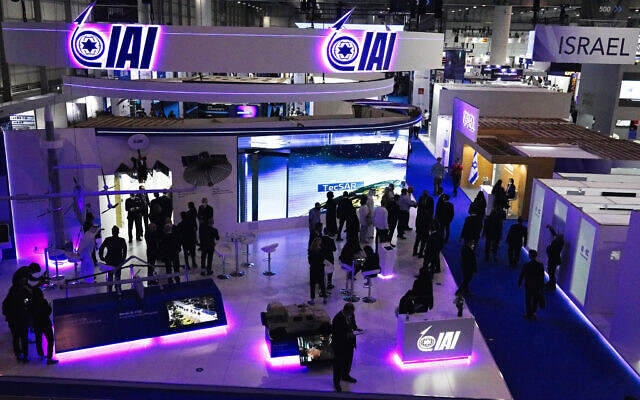 With vaccines rollouts ongoing in many nations worldwide, the airline industry as a whole is recovering from last year’s roughly $138 billion net loss.

Still, the industry as a whole continues to face losses this year and next. The International Air Transport Association forecasts a net loss of $11.6 billion for airlines in 2022, and nearly $52 billion in losses this year.

Although commercial travel remains uncertain amid upticks in infections in some countries, cargo volumes are already above pre-pandemic levels. Some airlines have ripped out seats on their grounded passenger flights and transformed their aircraft into cargo planes.

This year, more than 100 American companies are exhibiting at the air show.

“We are committed to deepening and strengthening this vital strategic relationship,” said Sean Murphy, US Embassy Charge d’affaires, thanking the UAE for its help in the US-led evacuations out of Afghanistan. The US State Department last week helped facilitate the evacuation to Abu Dhabi of a group of approximately 190 Afghans, including US-trained Afghan pilots, who had escaped to Uzbekistan after the Taliban’s takeover of the country in August.


You’re serious. We appreciate that!


We’re really pleased that you’ve read X Times of Israel articles in the past month.

That’s why we come to work every day – to provide discerning readers like you with must-read coverage of Israel and the Jewish world.

So now we have a request. Unlike other news outlets, we haven’t put up a paywall. But as the journalism we do is costly, we invite readers for whom The Times of Israel has become important to help support our work by joining The Times of Israel Community.

For as little as $6 a month you can help support our quality journalism while enjoying The Times of Israel AD-FREE, as well as accessing exclusive content available only to Times of Israel Community members.