A heavily modified drone which led helicopters from Customs and Border Protection and the Tuscon Police Department on a high-speed chase through the skies of Arizona was able to ‘perform like no other [drone]’ at speeds of up to 100mph, an official report says.

The report from Tucson police reveals how the drone flew into the path of a US Customs and Border Protection helicopter on at 10:30pm on February 9, and orbited it several times.

It then fled at high speed, leading the CBP chopper and another brought in from the Tuscon Police Department in a circular, hour-long chase.

At one point it even entered into restricted military airspace at the Davis-Monthan Air Force Base, which is about five miles outside of Tucson.

The FBI are now investigating the incident.

The drone never hit the CBP chopper but it ‘was flying dangerous close’, and sparked a chase as multiple law enforcement agencies tried to track it to find the people who were piloting it.

FBI officials told KOLD that the drone was capable of reaching 14,000 feet and speeds over 100mph with a range of 70 miles.

The CBP was using an Airbus AS350 that night, while sources close to The Drive said the Tucson PD Air Support was flying a Bell 206B-3 Jet Ranger helicopter.

Following a records request, The Drive obtained the Case Summary Report of the incident from the Tucson Police Department, which goes into more detail about what happened.

The tactical flight officer on the Tucson PD helicopter said in the report that the drone ‘maneuvered all over the city’ at over 10,000 feet (file image)

The report reveals the drone was first seen by the police at the corner of East Ajo Way and South Palo Verde Road, which is next to a fuel terminal operated by Kinder Morgan.

The tactical flight officer on the Tucson PD helicopter said in the report that the drone ‘maneuvered all over the city’ at over 10,000 feet.

The officer also said the drone moved ‘in a manner to hamper [the TPD crew’s] ability to track it visually.’

It then ‘appeared to move in an erratic pattern as if the signal with its home station was getting weaker’ when it was leaving northwest of the city.

The FBI previously said the drone made ‘erratic maneuvers’ and strayed into military airspace above fuel tanks at the Davis-Monthan Air Force Base.

From there, drone flew towards the Tucson International Airport as the Tucson Police Department and CBP pursued the drone.

It then flew northwest out of the city and into the clouds, where it vanished into the night.

It was last seen over 12,000 feet high, traveling over 74mph according to the police report. At that point, the police and CBP needed to refuel their vehicles.

In another section of the report, the Tucson PD’s pilot expressed hope that the drone would run out of battery and land, but ‘unfortunately, this was not the case.’ 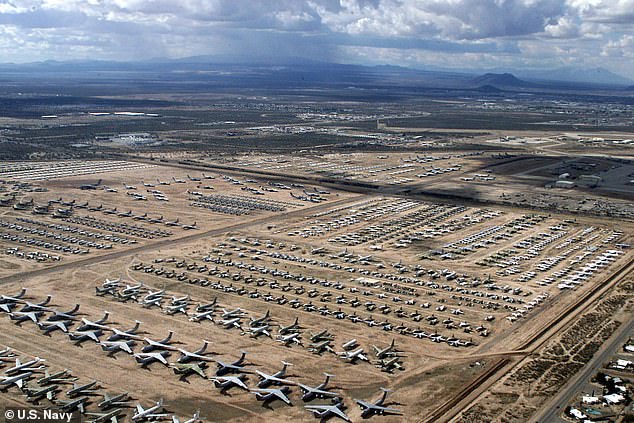 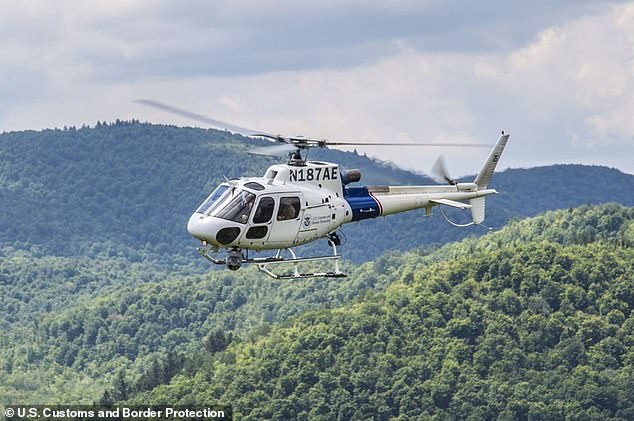 The drone that flew into the path of a US Customs and Border Protection helicopter on at 10:30pm on February 9 (file image)

The pilot said the drone ‘was very sophisticated/specialized and able to perform like no other uas [unmanned aircraft system].’

They added that it was ‘obvious that the controller had clear sight of both the helicopters tracking it by the way it would orbit us and abruptly fly behind us and attempt to avoid our visual contact.’

Police tracked the drone for over an hour, but never were able to get a reliable visual on it.

The intentions of the drone and where it came from remain unclear.

Officials previously described the drone as ‘high-powered’ and ‘heavily-modified’ but did not explain what modifications had been made to it.

The drone is said to have a single green light on its underbelly, which was confirmed by the Case Summary Report.

That made it challenging for the drone to be seen by the police department’s helicopter spotter, who was using night vision goggles.

It is also estimated to be between four and six feet in diameter and could have a four- or six-rotor configuration, KOLD reported.

The drone’s ability to fly as high as 14,000 feet suggests it uses advanced technology not available on the commercial market, according to The Drive.

The drone appeared to launch from an area about five miles south of Tucson and flew across Tucson and north over Marana, Arizona, the FBI said.

While the FBI is leading the investigation, it’s not clear if the US military was involved in any way in the initial incident or in the ongoing probe, The Drive reported.

No video was recorded of the incident by the police department.

Similar incidents happened in the area have been reported in 2018 and 2019, according to The Drive.

In 2018, a Learjet reported a drone flying at 40,000 feet above Southern Arizona, and in 2019, a drone was reported flying over Arizona’s Palo Verde nuclear power plant, The Drive reported.

The FBI said no one was injured and no other similar incidents have been reported involving this specific drone, but the operator(s) will likely face a federal criminal charge.

‘While the drone did not come into direct contact with an airplane or cause a pilot to make an evasive maneuver, the actions are illegal and extremely dangerous,’ the FBI said in its statement.

The ‘unsafe operation of unmanned aircraft’ became a federal offense in 2018 – with the passage of the The Federal Aviation Administration Reauthorization Act.

Andrew Rene Hernandez, a 22-year-old Hollywood man, became the first person charged under this law last year after he accidentally slammed his drone into an LAPD helicopter, forcing it to make an emergency landing.

In January, he pleaded guilty, and in April, he was sentenced to probation and fined $500.

The Federal Aviation Administration has noted evidence of a ‘considerable increase in the unauthorized use of small, inexpensive [drones] by individuals and organizations.’

Drone operators are required to register any drones that weigh more than 250 grams with the FAA, according to the agency’s website.

Drones under that weight limit and that are being used recreationally or as a hobby do not need to be registered with the FAA.

Federal law requires drone operators who are required to register to show their certificate of registration to any law enforcement officer if asked, the FAA said.

Failure to register a drone can result in civil penalties up to $27,500 or criminal fines up to $250,000 and up to three years in prison.