A new offshore service opportunity for an already proven mini-helicopter UAV, a possible alternative to flying cars, and bulking up UAVs to carry cargo – just a few of this month’s new developments in unmanned aircraft.

If you’ve ever gotten close to the Schiebel Camcopter S-100, such as at a trade show, or if you’ve worked with one, you’ve probably noticed that it’s a rugged, weather-hardened vertical take-off UAV.

It would seem that both military and maritime operations would be natural applications — so it’s not surprising that the United Arab Emirates (UAE) Army and German Navy have both bought S-100s.

The U.S. Air Force Research Laboratory (AFRL) also investigated use of the S-100 for detection of improvised explosive devices (IED).

The S-100 is a vertical take-off and landing, unmanned mini-helicopter with a top speed of around 138 mph, a range of just over 100 miles, with two payload bays, an electronics bay, and the ability to carry underslung loads — the all-up payload is 110 pounds. Sensors include an electro-optical/infrared (EO/IR) camera, an electronic support measures (ESM) system for detection and identification of electronic signatures, and synthetic-aperture radar (SAR).

So it’s no surprise that a recent trial demonstrated the S-100’s long-range, high-speed capabilities to deliver parts to a Norwegian offshore oil rig.

Nordic Unmanned and Schiebel flew a demonstration S-100 for rapid delivery of a 3D-printed replacement part from Mongstad out 55 miles to the gas production platform Troll A in the North Sea. This is said to be the first full-scale offshore UAV delivery from shore to an active oil and gas installation.

The demonstration simulated an urgent requirement for a nozzle holder for injecting diesel fuel into the platform’s lifeboat engine. Maintaining safety regulations and production flow from these offshore platforms is essential, but both ship and helicopter emergency trips out to platforms can be risky and downright dangerous in bad North Sea stormy weather — so the UAV option may save lives, time and cost.

Before flying back to base on the mainland, the S-100 also demonstrated its ability to closely inspect the operational platform, and even carried out a simulated search and rescue, locating a dummy in the water and providing live video and location data from its L3 Harris EO/IR camera and an Automatic Identification System (AIS).

Do we really need flying cars?

Where are we with people-carrying drone taxis and cars? To get them in the air for demonstration flights is tricky — there are a lot of  i’s to dot and T’s to cross before agencies like the U.S. Federal Aviation Administration (FAA) allow them to fly. There are also plenty of restrictions on where they can fly — certainly not over populated areas. It will undoubtedly happen eventually, but time is money, and regulations will likely outlast the financial supply for most start-ups.

Because of this, one outfit with significant credentials has taken another tack — automating aircraft that have already earned their certified wings.

The original Cessna 172 Skyhawk test flights and certifications successfully culminated in June 1955. The Cessna 208 Caravan gained FAA approval in October 1984. Both General Aviation aircraft have flown since then with established safety and reliability records. The FAA knows what makes a safe airframe, power plant and aircraft flight controls — what’s needed to qualify a remotely piloted, automated flight control system is surely a lot less than the complete aircraft and its existing systems. 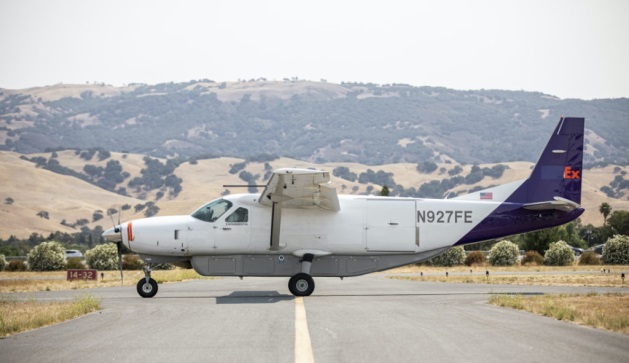 Ex-SpaceX software systems director Robert Rose decided that getting his autoflight system past FAA scrutiny would actually be an easier job. He started Reliable Robotics to get drone aircraft flying sooner.

The company has now developed an autonomous platform that can be retrofitted into virtually any fixed-wing aircraft. The system comprises avionics, flight control software, a mechanical hook-up, and a communications system which enables remote command and control, along with a reversionary backup system.

The autonomous system was integrated into a four-passenger Cessna 172 Skyhawk, and was used in an automated, unmanned gate-to-gate demonstration flight. The system underwent a full system safety analysis and test and the unmanned test flight included automatic taxiing, takeoff and landing.

The Skyhawk was flown without a pilot on board over a populated area, which was an essential part of qualifying the Reliable Robotics platform for safe civil use on an already certified passenger aircraft.

For the next test flight of a larger 14-passenger Cessna 208 Caravan, the integrated system again demonstrated full automatic remote landing of the aircraft. Reliable Robotics hopes that continuing certification efforts with the FAA will soon enable them to sell their automation system for certified unmanned passenger aircraft operations.

The majority of unmanned aircraft have been small. There’s even a category called small unmanned aircraft systems (sUAS) — so hanging a pizza on one for delivery by suppertime is about the most cargo you might imagine these things could carry.

One way to overcome this limitation — as we just saw — is to hook up a sophisticated auto-flight system to a passenger aircraft. Another way could be to build a large cargo-carrying UAV — like the Pipistrel (Slovinia) Nuuva V300, which is claimed to be able to carry up to 1000-pounds of cargo over impressive distances.

The vehicle has eight identical electric motors for vertical take-off and landing, and a gas engine powers a pusher propeller for cruise. The vertical lift electric motor has apparently been certified for airborne use by the European Aviation Safety Agency (EASA).

If the V300 cargo is reduced to 110lb, it looks feasible for it to fly over 1500 miles at up to 8,000ft. Pipistrel claims this operational cargo envelope to be 10 times more efficient than for an equivalent helicopter. Pipistrel has also launched a smaller V20 cargo version with the same offset wing set up and smaller electric lift and cruise propulsion — aimed at last-mile deliveries.

Seems the V20 is available fairly soon, but the V300 still has work to do — presumably certification effort – and won’t be available till 2023.

So potential oil-platform service deliveries for the S-100 Camcopter, turning already certified aircraft into passenger carrying unmanned vehicles, and UAVs coming for cargo carrying — all are new, promising and different UAV exploits. Let’s hope they all become commonplace in the coming years.