The Federal Aviation Administration takes a crawl-walk-run approach to unmanned aircraft system (UAS) integration in the national airspace (NAS). Many thought we were up and at least walking when the FAA officially published the final rule on Operation of Small Unmanned Aircraft Systems Over People (OOP) on January 15, 2021. This update amended the Small Unmanned Aircraft (SUA) Rule at Title 14 of the Code of Federal Regulations Part 107. Among others things, the OOP Rule added a new Subpart D, Operations Over Human Beings (new sections begin at §107.100). It also updates §107.29, Operation at Night.

Then, the FAA published Advisory Circular (AC) 107-2A on February 1. This document contains a chapter dedicated to OOP and a smidge dedicated to night ops. Inside Unmanned Systems previously provided a general overview of the OOP Rule and the other parts of the AC.

If the OOP Rule opened the walk phase, the AC gets us moving forward, though there will continue to be stops and starts. For example, the FAA has now pushed the required training for these ops out to April 6 (that’s the second delay, btw).

This training, and several other policy pieces that need to fall into place such as means of compliance (MOC) and remote identification (RID) tech are holding up full operationalization, despite the new OOP rule. Here’s a breakdown of the Advisory Circular’s OOP and at-night amplifications, with an emphasis on what SUA drivers can do with your drone at night and over people and, importantly, when you can do it to get you off and flying.

To foot stomp, §107.39, which defines OOP, still exists; it has been amended and Section D (more below) has been added. However, even under this section, SUA fliers today can in fact fly:

If an op does not fall under these parameters, OOP qualifies under one of four ops categories established in the OOP Rule:

And this is where it gets a little murkier.

MOCs and DOCs. This refers to Means and Declarations of Compliance, which affect the circumstances under which SUA can be flown over people. Cat 1 operations are simple and will be good to go after the FAA pushes out the now-delayed but required training, as expanded on below. Cat 4 needs to comply with relevant flight manuals and approvals. Cats 2-3 are a different story. To operate under the OOP Rule, these aircraft must be compliant with an FAA-approved MOC. RPICs and operators care because this will be dependent on designers and manufacturers.

The MOC is a method to show that an SUA do not exceed the applicable injury severity limit upon impact with a human being, does not contain any exposed rotating parts that would lacerate human skin and does not contain any safety defects. Any person who produces, designs or modifies an SUA eligible to operate over people within the U.S. must use an acceptable MOC for a Declaration of Compliance (DOC). The FAA must approve any MOC but MOCs can be proposed by any person, be drafted by any voluntary consensus standards body or be created by the FAA itself. The big reveal in the AC is that the FAA provides an acceptable MOC for both the impact kinetic energy and exposed rotating parts requirements.

This is where the math begins. 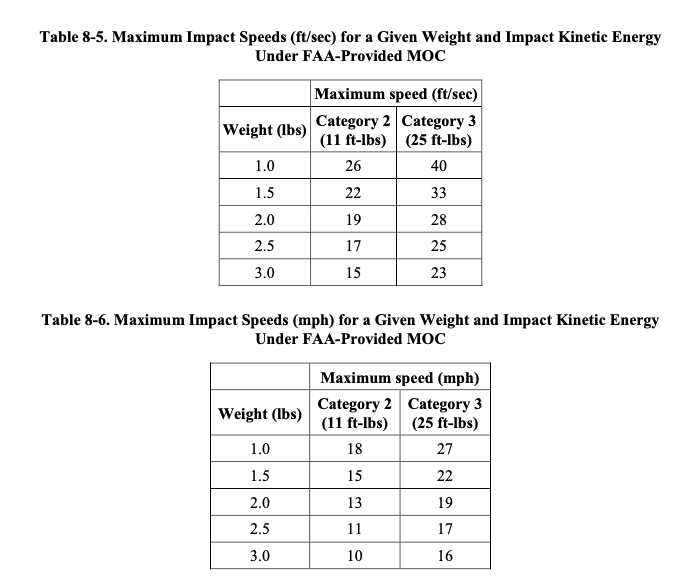 Once a MOC is approved, then the DOC process in Table 8.1 follows: 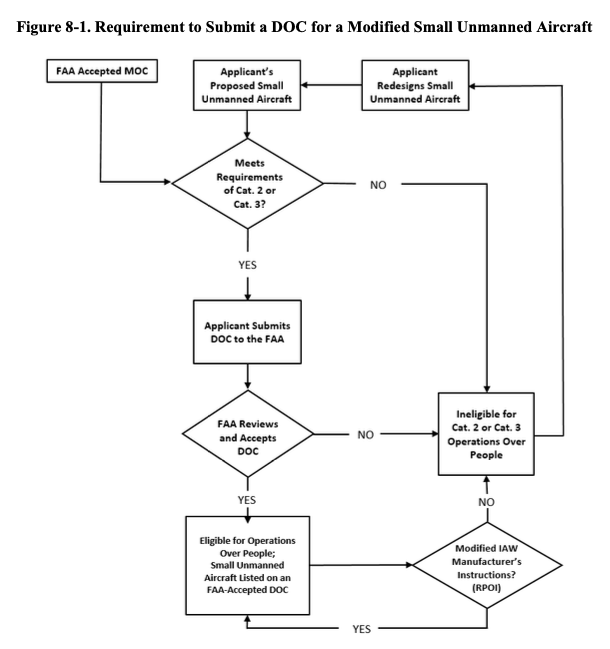 The AC gets specific on the contents of a DOC, so SUA makers and tinkerers should check out para. 8.9.1 “Declarations of Compliance.” Once the FAA accepts DOCs, including for mass-produced SUA, these will go up on a yet-to-be-created website.

Operating Instructions (OIs). Providing OIs with the SUA at the point of sale relates to another manufacturer (“applicant”) requirement. (Figure 8-2 in the AC provides a nice sample OI.)

Labeling. For Cats 2-3 to operate over people, the RPIC has to also affix a label to be eligible to fly. The FAA is not picky, as long as it is “in English, legible, prominent and permanently affixed to the aircraft” (para. 8.11.2). Bottom line: putting this on the outside of the bird makes sure it can easily be seen.

Operations Over Open-Air Assemblies of Persons. According to the AC, open-air assembly is “generally understood as dense gatherings of people in the open, usually associated with concert venues, sporting events, parks, and beaches during certain events…usually associated with public spaces.” (para. 8.3.6.4.)

“Sustained flight” over groups of people outside remains a no go but operators can:

The new bit is the ability to fly over people in vehicles who are not participating in the op vehicles. Here is what you can do once you have the required training:

The AC provides a few examples of “adequate assurance” that no unauthorized access will occur, including “physical barriers such as barricading and fencing or monitoring personnel. …Geographical boundaries, such as rivers, canals, cliffs, and heavily wooded areas may serve as effective barriers to restrict access.”

The updates to §107.29 allow night ops if the SUA RPIC has completed an initial knowledge test or (new) training and the SUA has “lighted anti-collision lighting visible for at least 3 statute miles that has a flash rate sufficient to avoid a collision.” The same lighting requirement goes for periods of civil twilight. Chapter 6 of the AC addresses this training requirement in detail, but the FAA pushed back its availability date from March 1st to March 16th, which now has been pushed to April 6th. An RPIC or operator may request a waiver of the anti-collision lighting requirement for operations at night and during civil twilight by applying for a Certificate of Waiver. Visual line of sight (VLOS) requirements still apply at night.

With regard to OOP at night, the AC basically says the OOP categories don’t change just because it’s nighttime.

In summary, with regard to OOP, there are things you can do today with a SUA under Part 107.39, such as flying over folks involved in the op or under a covered structure and staying a safe distance away from them. Beyond that, ops such as over moving vehicles can go live on or after taking training, on April 6th (if not again delayed) for tiny UAS (<250g). From a policy perspective, bigger ones will still need a bit of work (MOC, DOC, etc.) unless they are Part 21-airworthy. Even so, flying over open-air assemblies of people will require RID for all categories (except Cat 3, which cannot be flown over them), and that horizon is way out there. Night ops are waiting on the FAA to push out a recurrent training (not a test), so take that training, add lights and off you go!

Dawn M.K. Zoldi (Colonel, USAF, Retired) is a licensed attorney and a 25-year Air Force veteran. She is an internationally recognized expert on unmanned aircraft system law and policy, a recipient of the Woman to Watch in UAS (Leadership) Award 2019, and the CEO of P3 Tech Consulting LLC.

All images courtesy of the FAA.