CHS teachers, local pastors, and one student meet at 7 am for See You at the Pole Sept 22.

See You at the Pole, an annual global event, took place at 7 a.m. Sept. 22, at the front entrance to CHS and other local area schools. The See You at the Pole story began in Burleson, Texas in 1990 when a group of teenagers, burdened by their love for their friends, drove to three different schools looking for a way to intercede for them in prayer. What grabbed their attention at each school was the flagpole, so it is was there they began praying for their friends, schools, and leaders. See You at the Pole caught on and “…birthed a vision in the hearts of youth leaders across Texas…to pray simultaneously.” In June 1990, 20,000 students heard about the vision at Reunion Arena in Dallas, and then on Sept. 12 at 7 a.m. more than 45,000 teenagers met at school flagpoles in four different states to pray before the start of school. A national youth conference in Colorado set into motion a Sept. 11, 1991, event where “…students across the country would be creating their own national day of prayer” to sing, read Scripture, and pray for their friends, their leaders, and their country. The desire of a small group of teenagers, “…spread to other nations through missionaries from the U.S…now each year, an estimated one million students from all the world participate in See You at the Pole.” Locally, Fellowship of Christian Athlete teammates are back to meeting in-person on local school campuses and with some sports teams. FCA worked with local churches and multiple schools in local districts to coordinate having youth leaders and donuts at every school for this time of prayer. Currently, FCA has nine ‘huddles’ meeting weekly at CHS, CMS, DHS, and CVMS, and each week more students are getting involved, relationships are being built, and God’s Word is being shared. For more information about this event, please visit syatp.com/, or contact CHS FCA adviser Ty McMillen at [email protected]..

STUDENTS CREATE AND VOTE IN CHS LIBRARY LOGO COMPETITION
Logo submissions from students for the @SenatorsLibrary were voted on by students and staff. The winning submission, and now official logo of the CHS @SenatorsLibrary, is Senator Man by Morigan Ruffner, and the second-place winner is Elena Brugger and her social media logo @Man. The @SenatorsLibrary Logo needed to be updated, so Carson High’s third year Graphic Design class was charged with creating 12 color logos for the @SenatorsLibrary on paper as thumbnails for their summer honors assignment. The students, who perform many community and school projects, jumped at this wonderful opportunity to challenge themselves with real-world experiences which require them to satisfy a client’s needs. The diversity and creativity of the submissions gave many options to choose as the new and improved official library logo. Students and staff reviewed the submissions, and voted for the one which best represents the Carson High Library. CHS Senior Morigan Ruffner, creator of the winning logo, described the @SenatorsLibrary as “a place where senators can go to find a safe space, books, and community, as well as a place where friends can eat, and read.” When asked how she came up with the logo vision, Ruffner said, “I wanted to use the Senator logo in our signature blue, two highly recognizable staples of Carson High, and what says more about a library than a book?” Morigan has been drawing since she was little. Although she is unsure of her future plans, she is considering college or freelance work. Elena Brugger, also a senior graphic design student, created a logo that was a close second and will be used in social media and communication for the library. Elena describes the library as “a safe place where people can go if they want to study, or to talk to friends; it has a nice calm vibe to it.” She uses art as a way to express herself and finds it calming. Elena created the @man character for the library as it looks welcoming and brings an artistic flair to the library social media platforms. ~ Contributed by CHS Librarian and Media Specialist Ananda Campbell. 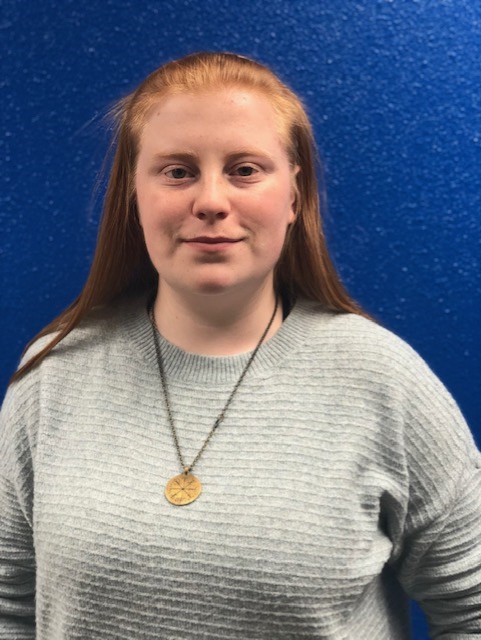 CHS SPEECH AND DEBATE VERSUS RENO HIGH COMPETITION RESULTS
Carson High debate returned to in-person competition last weekend at Reno High School with most of the team being brand new members who had never competed before. Ten schools and 158 students participated in 15 events, and Carson continued its strong showing in Program Oral Interpretation. In this event, students combine pieces of literature, poetry, music, and news sources around a singular topic to create an original story. Mason Tims placed sixth in novice point on the theme of narcissism with Olivia VanReese Roering placing third with a program on homophobia. In senior division, Evelyn Manzano placed sixth with her piece titled “Mommy Where are You?”, Abby Cook placed fourth with her piece on capital punishment, and Niko Ventura placed third on his piece focusing on the issues around Tictok. In novice humorous interpretation, Kiele Franco placed fourth with her cutting of “The Very Hungry Caterpillar,” Jessica Knutson placed sixth in Original Oratory giving a speech her speech titled “All that Glitters is not Gold.” Ryan Soulier placed fifth in senior foreign extemporaneous speaking giving speeches on current events and also placed seventh in senior Lincoln Douglas speaker points. Jessica Knutson and David Mariscal Gonzalez tied for third overall in Policy speaker points and second overall in policy debate. The team’s next competition is Oct. 15 and 16 at Wooster high school. For more information about CHS Speech and Debate, please contact CHS Social Studies teacher and Speech and Debate coach Patrick Mobley at [email protected]

FELLOWSHIP OF CHRISTIAN ATHLETES CORNHOLE TOURNAMENT RESULTS
FCA sponsored a Cornhole tournament Sept. 20 during the Club Fair at CHS. According to CHS FCA adviser Ty McMillen, “We wanted to open this tournament up to teachers and staff in addition to the students, to grab a teammate and sign-up by using the Scoreholio app or by visiting the FCA booth to register.” FCA Area Rep Tim Plummer added, “It was free to all CHS students and staff; we began with 26 teams playing round-robin, went down to 16 for single elimination, and then the top two teams won pizzas, which were delivered to them at school Sept. 21.” Prizes were given for first and second place teams, and they were given gift cards to Sportsman’s Warehouse if they could beat McMillen and Plummer; however, they came up short. For more information about FCA, contact CHS teacher Ty Mcmillen at [email protected] or FCA Area Representative Timothy Plummer at 720-9158. 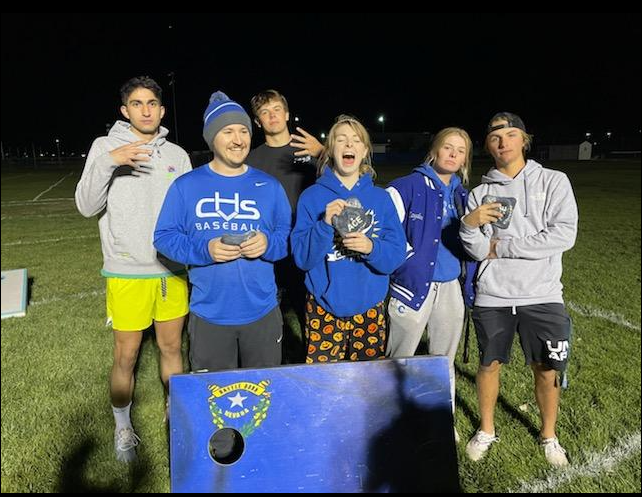 CHS students celebrate their wins at the Fellowship of Christian Athletes Cornhole toss at the Sept. 20 club fair.
EVERYONE MAY PURCHASE CHS APPAREL TO SUPPORT SENATORS
CHS Football has recently released its Team Store link to purchase apparel and other items to support the athletic program. If anyone is interested, come on Carson City, everything is purchased online and picked up by yourself at Graphics Factory, very easy and seamless. Those planning to make a purchase will be able to do so next week. As many already know, the first game was cancelled last week because of the dangerous levels of smoke, but it appears there may be a reprieve the next two days to get in the freshmen and junior varsity games. The varsity game was moved from Saturday to Friday at 7:00 for various reasons and as of today teams are full steam ahead and planning to play. CHS Athletic Director and Head Football Coach Blair Roman thanks the faithful community of Carson City for all its support amidst some of these more hazardous times of poor air quality. To purchase some beautiful blue, gray, and black CHS colors, please visit shop.graphicsfactory.biz/chs_apparel_locker/shop/home.

STRESS MANAGEMENT FOR PARENTS
Feeling overwhelmed by current events? Wondering how to better manage personal stress and support your children in their self-management efforts? Join Kristin Robison and Molly Dahl, both local authors and educators, with their sharing of pertinent research in a workshop on Stress Management for Parents of School-aged Children and Teens. Kristin and Molly will share easy yet potent practices to help parents leverage their inner resilience to beat the stress monsters. The Secret to Happy and The Art of Emotional will both be available for purchase, and the authors are happy to sign you a copy. This event will take place from 6-8 p.m. at The Studio at Adams Hub, 111 West Proctor St. For more information, call Kassandra at 222-0001, or email adamshub.com.

ATHLETES OF THE WEEK
CHS Athletic Department’s Athletes of the Week are Ben Heaton for Varsity Boys Football and Anne Turner for Varsity Girls Volleyball. These athletes and all students who participate in school functions through leadership, clubs, and sports deserve a high level of recognition and congratulations. 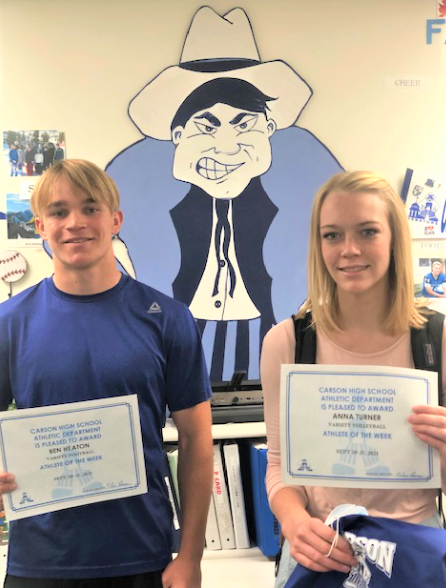 STUDENT OF THE WEEK
Congratulations to Isabella Cantwell as the CHS Student of the Week. Nominated by her teacher, Carlos Mendeguia, who said, “Isabella shows up every day, tries her best, and has a great attitude; she treats everyone with respect and has been a pleasure to have in class this year.” Mendeguia added, “What really stood her apart from anyone else is her character because last Wednesday, during my B6 class, she walked up to my desk and asked if she could go to the office…said she had found something and would like to turn it in…so I asked her what it was, and she showed me a fresh $100 bill.” Mr. Mendeguia said it was unbelievable someone her age would actually want to turn a hundred dollars she just found; it shows her true character and integrity, and he wishes there were more Isabella’s in the world. Congratulations to Isabella on gaining the positive attention of her teacher and being nominated as the CHS Student of the Week. Employees within Carson City School District nominate the CHS Student of the Week, and it is often the students’ teachers who do the nominating though anyone in the district may do so by sending an email to [email protected]. 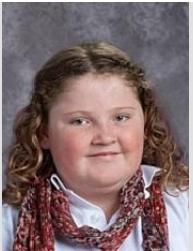 CHS Student of the Week is freshman Isabella Cantwell

SENIOR IN THE SPOTLIGHT
Mackenzie Tackett has always been focused on her education and her future. At the young age of 8, during a health screening, it was discovered she had hearing loss in her right ear, and last year, at age 17, she was diagnosed with dyscalculia, Dyscalculia is a learning disability in math. People with dyscalculia have trouble with math at many levels, often struggle with key concepts like bigger versus smaller, and they can have a hard time doing basic math problems and more abstract math. Due to her motivation and drive, she has overcome so much and will be graduating this year with an above average GPA. While taking college bound classes, she is also very involved with her school and has accomplished great things. She has been on the cyber security and rifle teams in the CHS Military Science program and has also earned the rank as ensign. Mackenzie has lettered in swimming and is studying American Sign Language. Teachers have described her as being driven, motivated, and equally hard working. Mackenzie is currently applying to colleges with an NJROTC program. Her hopes are for a future in the military flying drones as she has already earned her drone pilot’s license. Her other career plan for the future would be to become a sign language interpreter. Congratulations Mackenzie on being this week’s CHS Senior in the Spotlight. ~ Contributed by CHS Counselor Monica Weaver.

CHS Senior in the Spotlight is Makenzie Tackett

Phil Brady is an English teacher at CHS