(MENAFN– Asia Times) SEOUL – The excitement did not quite match the Apollo Moon landing but it came close as South Korea trialed a flying taxi on Thursday.

A hanger at Seoul’s Gimpo Airport was repurposed as an expo space, populated with virtual-reality flight simulators, models of Urban Air Mobility (UAM) solutions from multiple firms and research bodies, and mock-ups of“vertiports.”

A swarm of VIPs, reporters and tech geeks massed to watch the spectacle. After the requisite speeches, orchestral music boomed as a German-made, Swiss-piloted UAM vehicle rose vertically into the sky above Gimpo’s runways and parked airliners.

To a chorus of“oohs” and“ahs” and the click of a thousand shutters, the vehicle made a modest aerial circuit of the building before returning.

After the drone-like vehicle had touched gently down, event-goers swarmed onto the tarmac to congratulate the pilot – and, of course, shoot selfies with him and his machine.

Similar technologies were last year showcased in central Seoul – albeit without a live human aboard. Thursday’s event offered secondary proof of concept, showing that not only was the vehicle safe to fly, but that it could synch its electronics suite with the air traffic management (ATM) system of a working, world-class airport.

This means that the national plan to adopt aerial cabs, which in their first-phase rollout will shuttle between Seoul’s two airports to and from its city center from 2025, is on course.

Further phases will follow, with the end result being autonomous flying vehicles whisking passengers from point to point through city skies.

South Korea, despite its tech-mad populace and a national habit of swiftly adopting futuristic gadgets, is unlikely to be the first country to roll out the service globally or regionally.


Korea’s ambitions in the UAM space were matched by the hoopla surrounding the test flight of a UAM taxi. Photo: Andrew Salmon / Asia Times State of play

While companies across the world are engaged in producing UAM vehicles, only two are willing to offer them for test flights, a Seoul official said: China’s EHang and Germany’s Velocopter.

While Korean conglomerates Hyundai Motors and Hanwha are both building UAM prototypes, their offerings are not likely to be ready for the clouds before 2023, the official said.

As an EHang vehicle was used in last year’s Seoul demo, a Velocopter machine won the honors this time. The battery-powered UAM solution can travel at 110km/h, over a range of 35km with a 400lb+ (180kg) payload.

“The industry is at an exciting inflection point, so we are thrilled to be here, to get personal engagement,” said Velocopter CEO Florian Reuter.“This is a milestone.” 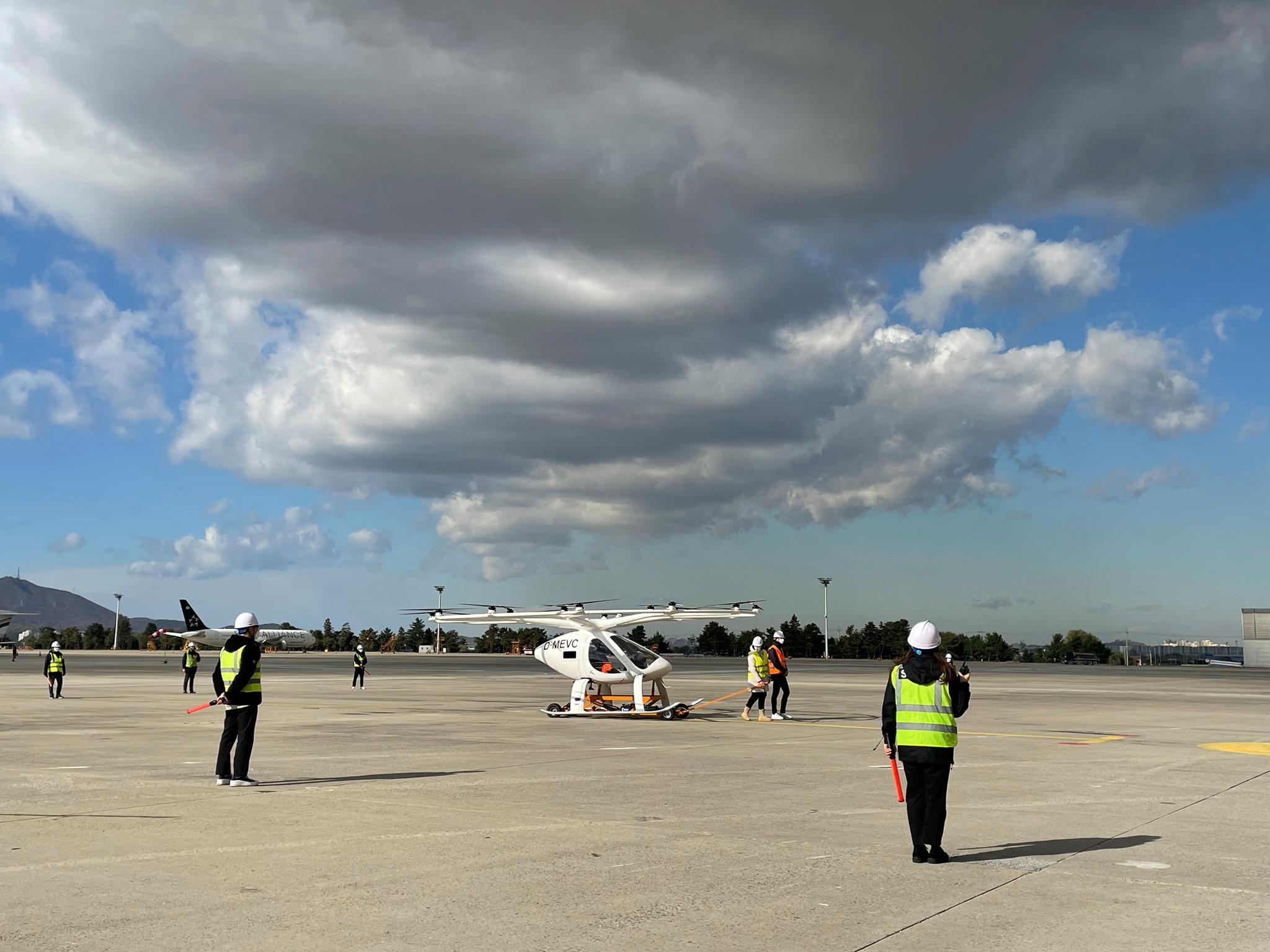 Due to the necessity of embedding extensive safety protocols and the need to pre-generate public trust in UAM, the much-discussed autonomous flying cabs – essentially civilian versions of military Unmanned Aerial Vehicles, or UAVs – are off the table at present.

“No country in the world allows unmanned flights,” said Helena Treeck, head of PR at Velocopter.

While Treeck expects the EU regulatory agency to greenlight unmanned UAM around 2035, the industry is currently focused on piloted UAM solutions.

Given that old-school helicopters can do all that current generation UAM vertical-take-off-and-landing vehicles can do – what makes the new vehicles a game-changer?

Cost is foremost, Treeck explained. While helicopter taxies are the preserve of the rich, use of drone technologies in the UAM sector makes the vehicles much easier to maintain and therefore more economical than helicopters.

Price competitiveness will be boosted when UAM vehicles shift to mass production, Treeck said. For the end-user, a UAM fare will be“about the same as a premium taxi” she said.

Being battery-powered, UAM vehicles are not just clean, they are low-noise.“Eighteen small rotors are quieter than one big one,” she said. This is critical as many cities globally have noise regulations, she noted, and flying cabs will be operating at a much lower ceiling than fixed-wing aircraft and helicopters. 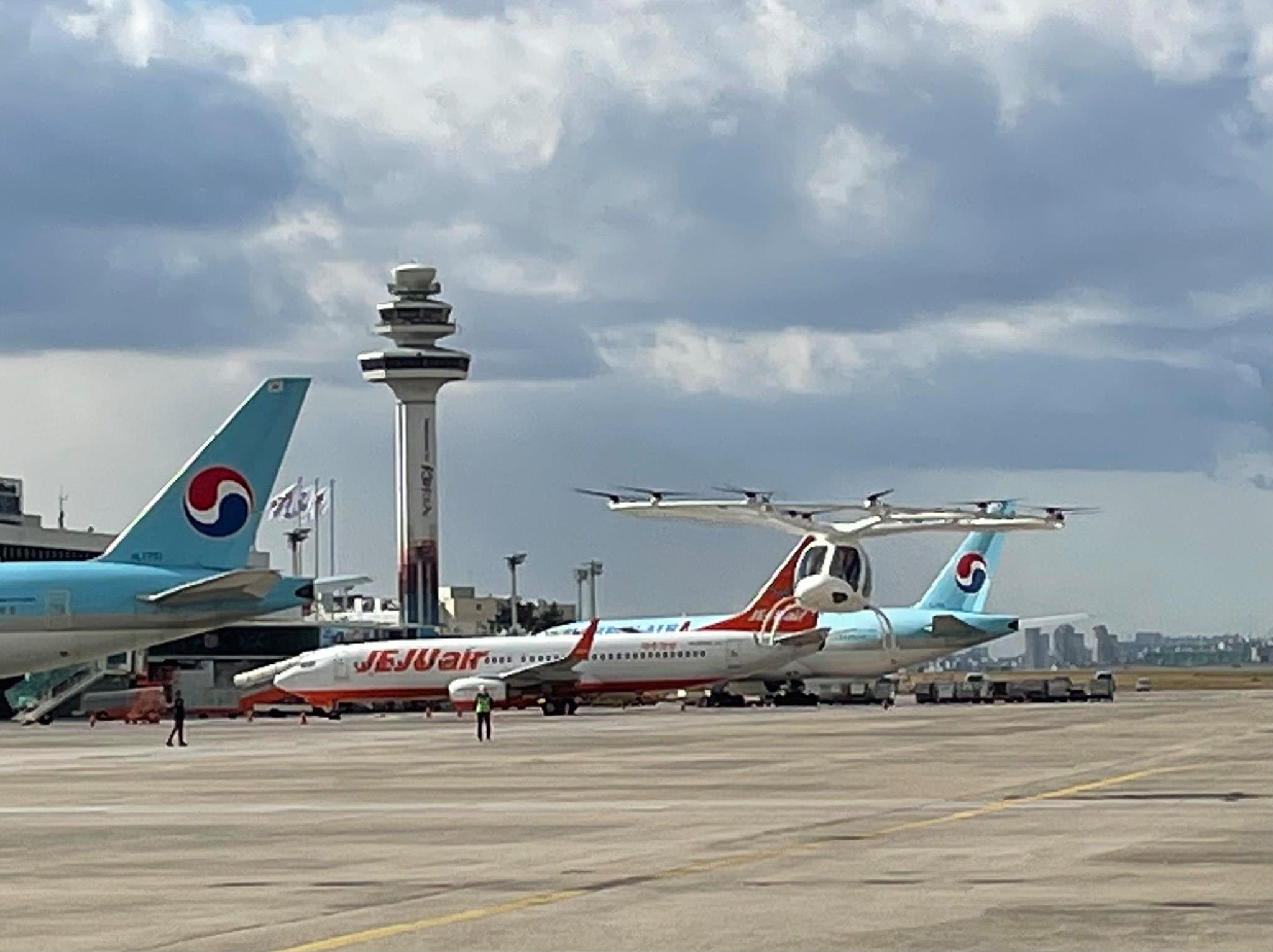 Then there is safety.“The safety level we design to is for an airliner,” Treeck said. This gold-standard certification is essential,“because we fly over densely populated areas.”

The use of high-technology materials also makes UAM vehicles lighter – and so more economical, as well as more flexible in their landing options – than helicopters.

South Korea stood up a task force, comprising personnel from six government bodies, in June 2020 to plan the country’s UAM strategy. Plans for the phased establishment of a UAM eco-system in Seoul were explained to Asia Times by Nah Jing-hang, director of the Drone Transport Division of Seoul’s Ministry of Land, Infrastructure and Transport, or MOLIT.

From 2025, piloted UAM vehicles will come into use, Nah said. From 2030, the sector is expected to shift to remotely flown vehicles – freeing up more space for passengers and luggage. And from 2035, the flying vehicles will be entirely autonomous.

That is the technological blueprint. A second road map – or, perhaps more germanely, air map – exists for service expansion. The two plans must move“step-by-step, and side-by-side” Nah said. 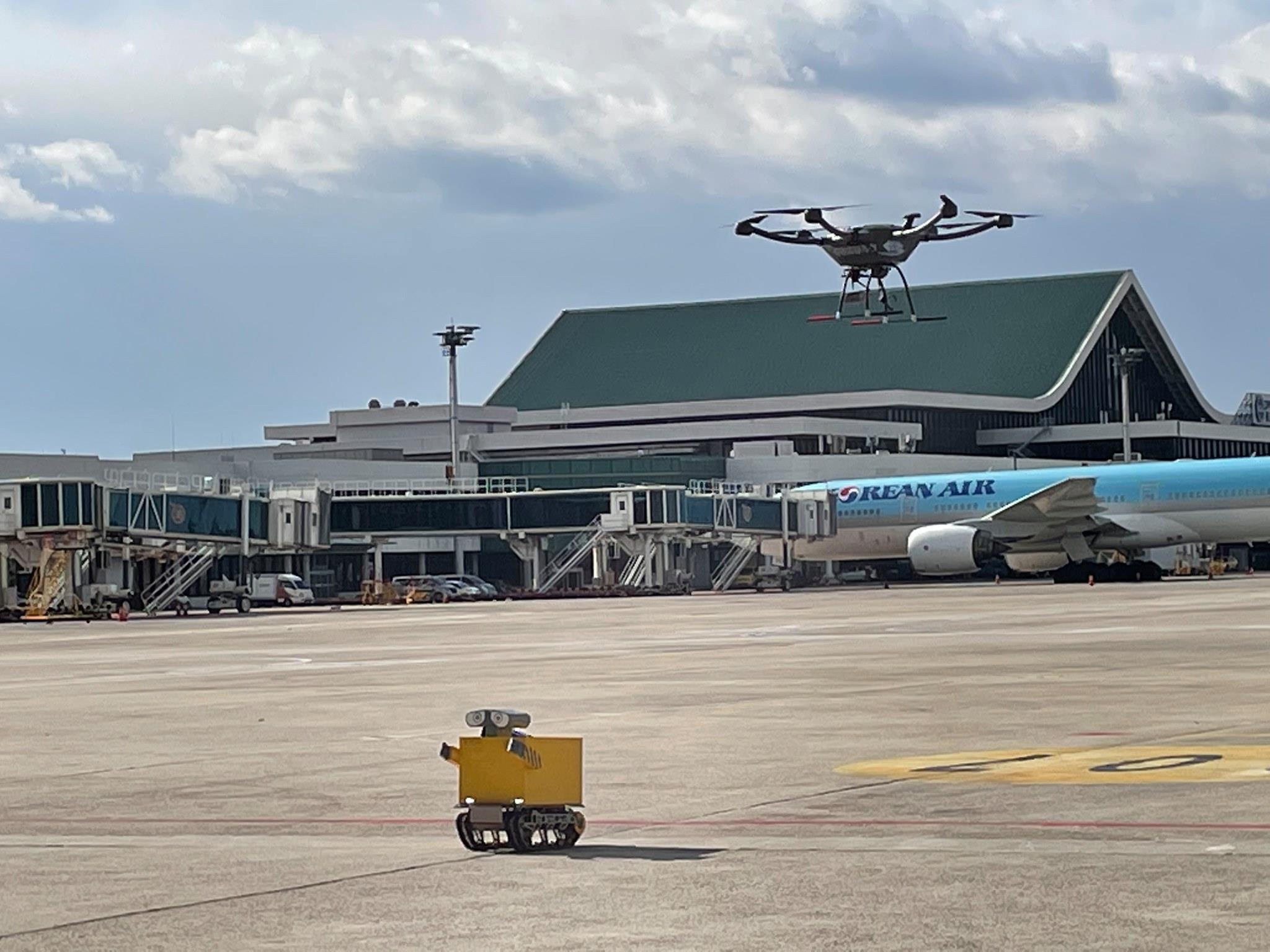 From 2025-2030, the plan is for the aerial vehicles to fly along dedicated, 300-600 meter-wide air corridors between Seoul’s duo of airports – Incheon (international) and Gimpo (largely domestic) – and a network of downtown“vertiports.”

From 2030, use will expand as the flying taxies swoop around different vertiports in the Seoul area, rather than being restricted to the airport-city corridor. These vertiports are likely to be built on or near transport hubs, such as rail or subway stations.

Finally, post-2035, there will be point-to-point services, in which the aerial taxies operate like their terrestrial counterparts, picking up and dropping off customers all over the city, though details of this have to be worked out.

In addition to flying along dedicated air corridors, verticality will be used to de-conflict airspace users.

Fixed wing aircraft will be at the top of the verticality; helicopters below them; UAM vehicles below them; and finally, delivery drones will occupy the lowest ceiling.

In addition to these de-confliction mechanisms, UAM manufacturers are embedding sensors in their vehicles as a fail safe, officials said.

When it comes to pilot training, professionalism will be to the fore – meaning taxi drivers are unlikely to transition from roads to skies.

“The first pilots will have civil aviation licenses,” Nah said – though UAM vehicles are“much easier to handle than a helicopter.” 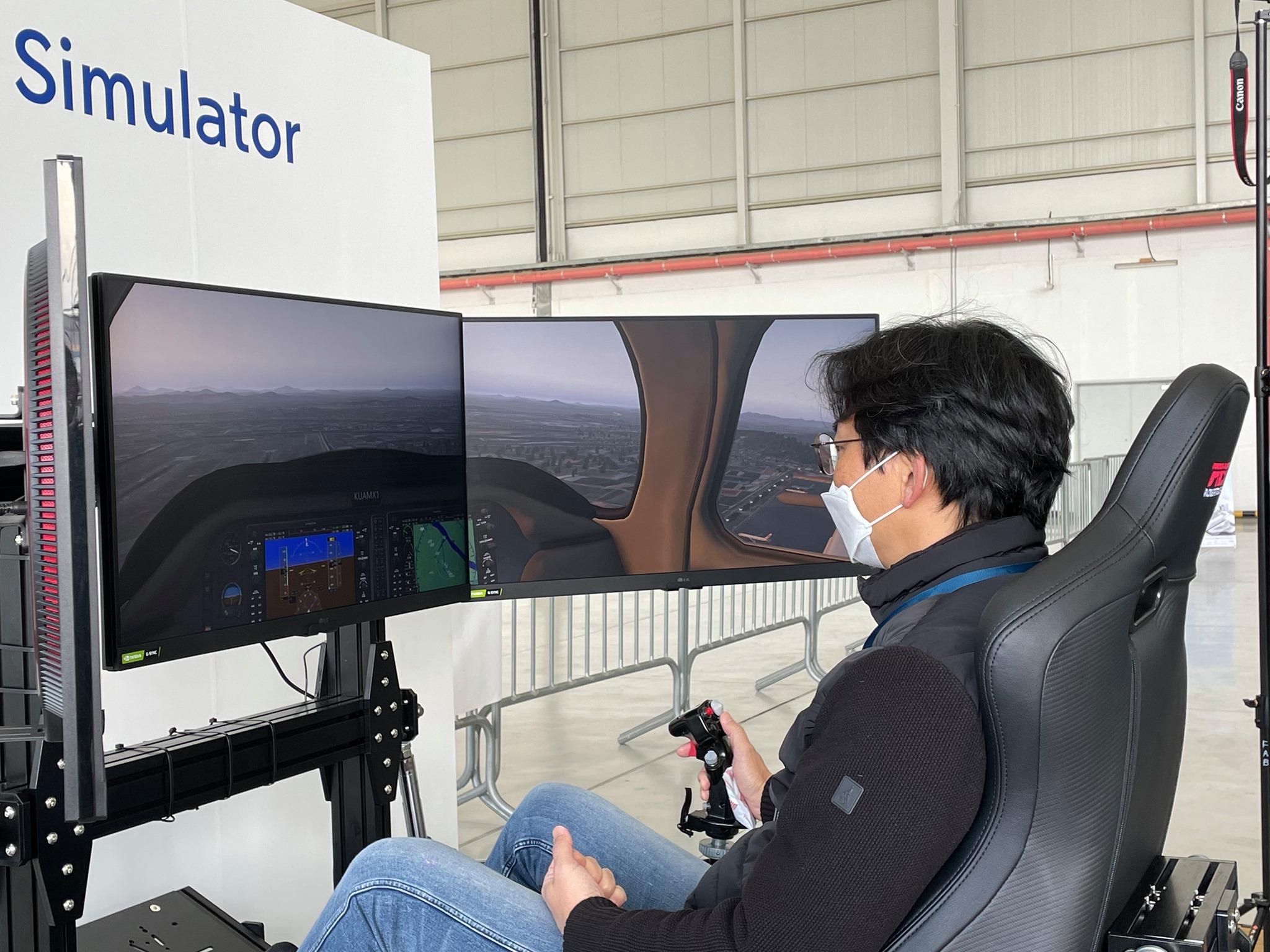 You too can be an airborne cabbie….action at a flight simulator during Thursday’s aerial taxi test flight. Photo: Andrew Salmon / Asia Times

Looking further ahead, there may be demand for private citizens to own personal flying cars. But that projected trend is likely to be obviated by anticipated technological advances.

“By then, UAM vehicles will probably be fully autonomous,” Nah said.

The flying taxi industry will not be a monopoly, Nah said. The benchmark is civil aviation, with multiple companies flying models of different sizes and paying to use vertiports.

Though the Korea Airports Corporation was displaying mock-ups of vertiports at the event, the KAC will not be their exclusive operator, Nah said.

A KAC official at the event said four vertiports are planned for 2025: One at Incheon Airport, one at Gimpo Airport, one at the Cheongyangni rail and subway transport hub in northern Seoul, and one in the Samseong rail transport and convention center hub in southern Seoul.

Their five-story facilities will include five landing/take-off spaces, and 50 UAM taxi parking spaces. Unlike cab ranks, but in common with airports, there will be need to be weight checks for passengers and their luggage, plus security checks.

In addition to a phased expansion of vertiports inside Seoul, the facilities will also rise in the capital’s satellite cities, the official said. 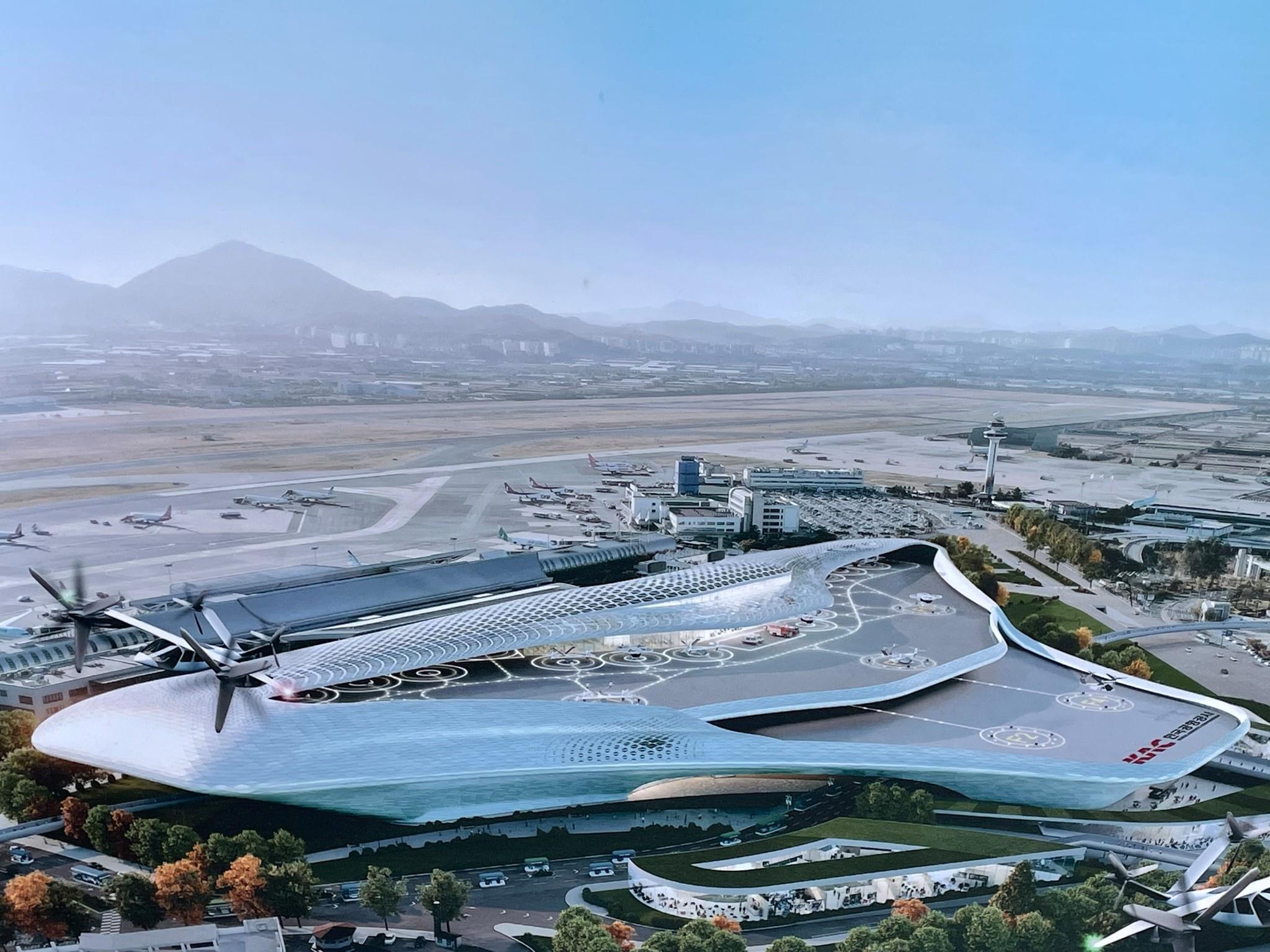 Regarding the long-term aim of true taxi-style point-to-point fares, Treeck said that her company is already getting inquiries from real estate developers to incorporate landing spaces in their buildings.

And in Korea, the rooftops of Seoul’s countless high rises – many of which feature rarely or never used helicopter landing pads – will make ideal pick up/drop-off points, Asia Times has learned.

Race for the sky

Korean conglomerates Hanwha and Hyundai Motor are both engaged in the UAM space. Both showcased – but did not fly – prototypes at the event.

Hanwha’s 4-rotor“Butterfly” UAM vehicle carries one pilot and five passengers. The Korean firm, which has competencies in energy and defense, has invested in UAM in the US, and is targeting certification from the US Federal Aviation Agency by 2025, said Yun Hun-woo, director of the company’s UAM Business Development Team.

UAM is“a top priority for Hanwha Group,” Yun said. The Korean government“wants to be a leader in UAM in Asia” he added.

Currently, Germany’s Velocopter and China’s Ehang may be ahead of the corporate pack in the vehicular space, but another race is on to decide which country – or city – will first roll out commercial UAM services.

Velocopter officials who spoke to Asia Times at the event reckon that the leaders at present are Paris or Singapore. But Paris has a specific boost: It has vowed to offer commercial UAM services before the 2024 Paris Summer Olympics.

Given this, expectations are that the French capital will take the lead. Certainly, there is unity of purpose said Velocopter staff, who say they are working closely with the city.

“Any time you have the government and the regulator on board, odds are good,” Treeck said. “You need everyone at the table.” 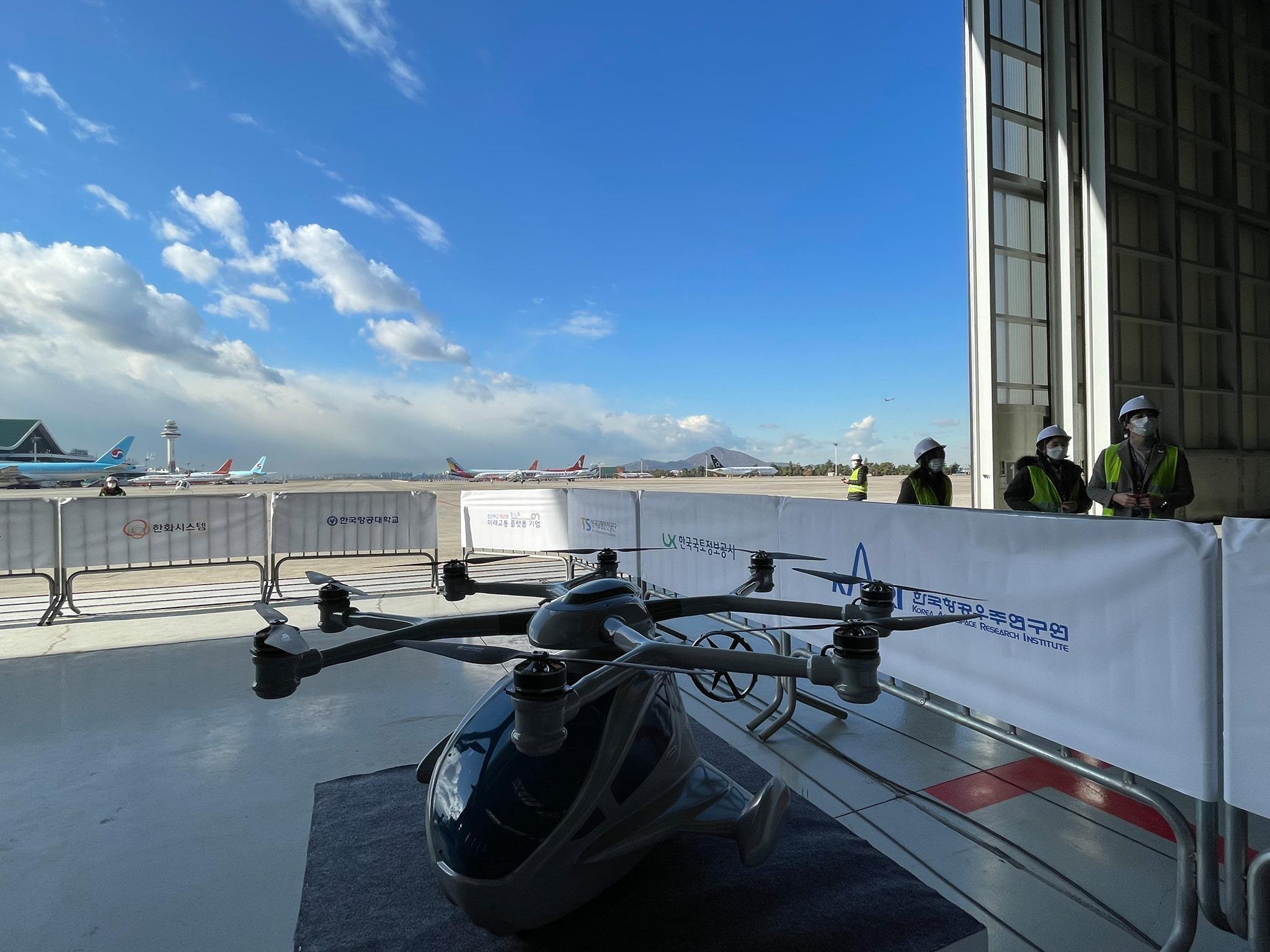 Nah and his colleagues are watching Paris’ progress with interest. Korea’s ATM and regulatory framework are closer to the US Federal Aviation Authority than the EU’s European Aviation Safety Agency, or EASA, he said – but Seoul is flexible about benchmarking all solutions.

Clearly, the public mind is captured by the potential of UAM. In addition to rising above congestion, the UAM offers adventure and the aesthetic pleasure of viewing a city from the sky.

“Tourists will be able to take new looks at cities,” said Treeck.“UAM is more stable, quieter and safer than helicopters.”

Her statement was backed up by Swiss test pilot Damian Hirchier.“It’s a smooth ride,” he said.

Flight ceilings are likely to vary from city to city.“In New York, they may fly higher than Paris,” Treeck noted.

Still, the Seoul plan suggests that UAM solutions will fly at lower – and more visually impressive – altitudes than either helicopters or fixed-wing aircraft.

All this raises a big question. Given the vast potential of the sector, why are regulators around the world proceeding so cautiously rolling out existing, working technologies?

“The main issue is safety,” said Nah – who quoted a Korean proverb:“Even if you have a stone bridge, you should check it before crossing it.”

In tandem with the intense public interest in UAM, manned and autonomous, is intense public concern about accidents. Any crash would likely receive massive media attention, which could set back the entire project.

“If we have an accident with UAM, it will hinder the future adoption of UAM,” Nah said.“So, in a way, slow is fast.”