“I found your third suspect,” said Elias Rodriguez from the San Diego Police Department. “There’s a patrol unit parked on the [805] freeway with the flashers on. He’s between you and Franklin, midway up the hill hiding in the treeline.”

Rodriguez, a tactical flight officer, was about 1386 feet above the Imperial Marketplace neighborhood in a helicopter piloted by Officer Blair Stephens — about 11:45 p.m., according to a video posted by Teledyne FLIR on their YouTube page in August 2021. 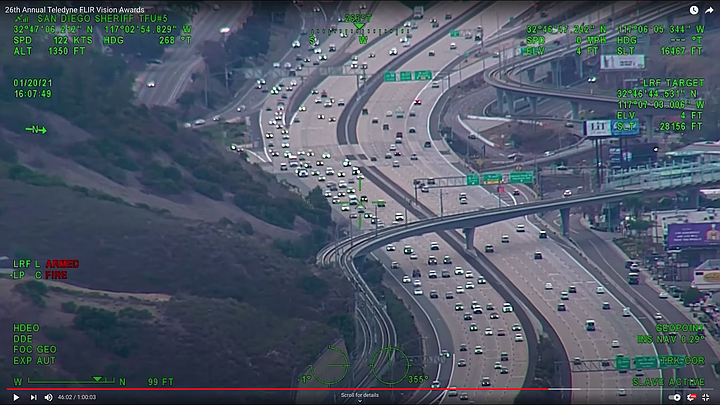 “Is there a @SDSheriff helicopter flying over your area making announcements?”

Rodriguez was using thermal-imaging technology — which helped him differentiate the suspects that just ditched a stolen car, from multiple police officers, K-9 units, and bystanders — in total darkness. He’d then relay the whereabouts of the fleeing suspects as they jumped fences and hid from the officers below.

The imagery depicted on the video, which was in black-grey-and-white tones, helped Rodriguez locate two other suspects by Ocean View Boulevard earlier in the footage. One suspect was crouching by the bottom of a vehicle parked on a driveway, while the other hid by what appeared to be a tree in a neighbor’s backyard. About 300 feet north of where the two suspects were caught, a third was hiding behind houses and parked jet-skis on South 46th Street, up an embankment from the Imperial Avenue on-ramp to the 805 southbound freeway.

To “the K-9 unit walking on the freeway, if you keep walking a little bit further, probably another ten feet, look up the hill,” Rodriguez directed the police officers. “….. you guys peeking over that fence as you jump the fence go towards your left about 15-20 feet …. right there where your lights are pointing at.” Two additional police officers by the jet-ski area ran into the frame. “Turn to your right a little bit, yep, right there; you guys should see him right now.” The four police officers down below approached the remaining suspect then the video faded out.

“The ‘Teledyne Flir Vision Award’ is a national award given to a law enforcement agency’s aviation unit for using the Teledyne FLIR system to capture suspects wanted for serious crimes,” posted the San Diego Police Department on their Facebook on September 8. “Two of our ABLE officers, officer Blair Stephens and tactical flight officer Elias Rodriguez, did an outstanding job using their intuitive skills and technology to apprehend all four individuals who ran from a stolen car. As you can see in the [January 2020 captured] video, their training and experience have landed them this prestigious national award.”

On July 11, about nine miles south of the Imperial Marketplace neighborhood, a different type of aerial chase transpired. At about 2 p.m. that Sunday, the Chula Vista Police Department, with their drone’s assistance hovering near the Main Street and I-5 exit, reportedly spotted a Chevrolet Traverse SUV and its driver that fled from a hit-and-run crash in National City. The vehicle was “coming south on the I-5 at high speed and smoking badly,” said the 911 Video News outlet. “The suspect exited onto the Main St. exit and crashed a second time. The CVPD officers went over and detained the male for the arriving NCPD officers, and he was arrested for the felony hit & run and DUI.”

Chula Vista police were said to be training with their UAS Drone Program that afternoon. Unmanned Aerial Systems, or drones, are compact, less than 55 lbs., and remote-controlled flying devices. They have cameras on board.

The circa-2017 Chula Vista drone program responded to 8033 calls since October 22, 2018, that assisted in 945 arrests. The police-operated drones are registered to have an average first on-the-scene response time of 97.81 seconds.

“Is there a @SDSheriff helicopter flying over your area making announcements?” tweeted the Sheriff’s department. “We have a new service to keep you informed. Call or text ‘Hello’ to (858) 866-HELO (4356) to receive messages straight to your phone. This [feature] is only available in our patrol areas.”