For years, Electric Vertical Take-Off and Landing (eVTOL) aircraft have hovered in the golden dawn of a distant future. Developers today are flight-testing real vehicles with aggressive certification time frames.

Major suppliers like BAE Systems and Honeywell are anticipating commercial flights by 2025. Both are heavily invested in developing components and systems for the diverse and impending ecosystems of advanced air mobility.

Hess has seen initial discussion of air-taxis branch out into rescue, medical, cargo, oil and farming use-cases. BAE Systems is developing processes and tooling to industrialize components across a spectrum of candidate designs. “Once smart people show what is possible, everyone jumps in. The aviation industry itself doesn’t yet understand the full potential or ultimate direction” he says.

“The second is lift-plus-cruise, with dedicated propulsion to lift the vehicle and separate propulsion to push it forward. The third is a vectored-thrust configuration, where propellers start vertical then rotate to horizontal.”

For longer trips, lift-plus-cruise requires no rotation mechanisms but entails carrying inactive propeller weight in flight. “The trade-off is efficiency versus complexity,” Fymat continues. “Co-creating this industry will require many players. The airframe is a skeleton, but we provide the brains and muscles.”

Volocopter’s VoloCity is an example of Fymat’s first vehicle-class – a multicopter designed for EASA SC-VTOL type-rating certification and commercial operation by 2024. “EASA is tailoring its Means of Compliance for classical rotorcraft to the specific behaviors of these vehicles,” says head of certification and quality at Volocopter Oliver Reinhardt.

Reinhardt endorses EASA’s insistence on the same 10-9 reliability that is required of commercial airliners. “We can afford nothing less,” he says. “Statistics play against you. It is a challenge, but simpler with no transitions or moving rotors.”

“It includes flight-control, propulsion and battery systems, because you absolutely need electrical power throughout the flight regime. It demands redundant systems to account for periodic random failures.”

BAE Systems is positioning itself in terms of technology to serve this emergent ecosystem. “We develop high-integrity controls but also high-power, high-voltage battery systems,” says Hess. “Advanced air mobility requires the confluence of both product classes in a single platform.”

The Jaunt Journey is a lift-plus-cruise aircraft which uses its proprietary ROSA (Reduced-rotor Operating Speed Aircraft) technology to slow its main rotor during wing-based forward flight.

“Physics is physics,” says CEO of Jaunt Air Mobility, Martin Peryea. “Larger rotors are more efficient for lifting. But in cruise flight, you need wings to reach the efficiencies of an aeroplane.”

A Journey demonstrator has so far clocked up 300 flight-test hours. By 2023 Jaunt plans to have a pre-production aircraft ready to serve as a testbed for battery and control systems. Emphatically, these will be fly-by-wire.

Achieving full control by dynamically modulating rpm across the VoloCity’s 18 rotors can only be done by an algorithm.

“Entering forward flight means decreasing rpm at the front and increasing it in the rear,” Reinhardt explains. “The aircraft tilts and the lift-vector moves in a forward direction. Correctly triggering 18 motors is clearly beyond a pilot’s capability.”

BAE Systems introduced military fly-by-wire systems in the 1970s and they are commonplace today on commercial airliners. “Fly-by-wire computers take inputs from the pilot and compute commands to control the flight-path and maintain aircraft stability,” says Hull.

The company is adapting existing fly-by-wire controls to meet the needs of eVTOL aircraft. “Flight-control and propulsion will be more closely coupled,” Hull says.

“We have to scale technology down and make it affordable. That’s not an easy problem to solve. It must remain extremely safe, but also present a viable business-case for customers.”

Continued miniaturization of processors and power-supply components will determine the limits for control systems.

Thanks to flexible embedded software, a single system can serve divergent aircraft configurations. “What differs are the control laws which run inside,” he explains. “We provide the environment where those control laws are written. Whether it’s a Volocopter or a Jaunt vehicle, the system can handle what moves, what rotates and how many they have. It’s just a software change.” 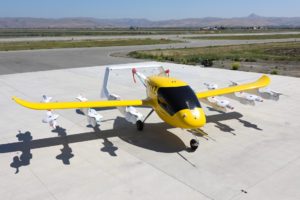 Wisk aims for the Cora to be fully autonomous at launch

Electrical energy-management systems are about more than just delivery and distribution. “Battery systems require particular care and must avoid overheating or generating electromagnetic interference,” Hess continues. “We must leverage the design of harnesses and bus-bars and understand better how high-voltage systems behave at high altitudes.”

“We are committed to a self-flying-first approach and intend to start operations without a pilot,” says Wisk’s chief technology officer, Jim Tighe. “The safety, scalability, accessibility and cost benefits of self-flying are essential to creating services available to everyone.”

Cora has completed 1,500 flight-hours and Wisk is working with NASA and the FAA on autonomous aviation, navigation and collision-avoidance. The task is ambitious. “Defining requirements and means to comply is as challenging as the technology effort itself,” says Tighe.

For Jaunt, like Volocopter, autonomy is a final destination, but certification with single-pilot instrument flight-rules (IFR) is an expedient staging-post.

Peryea says, “Are you ready to board an autonomous aircraft? Authorities today can’t certify one – but we expect early applications in cargo missions to build up flight-hours and public confidence.”

The world’s first air taxis will be piloted aircraft that incorporate a high level of background automation.

Manual piloting will diminish to inputting a desired flight path for fly-by-wire computers to execute.

“The pilot becomes a flight-deck manager who monitors systems and gives basic commands,” says Peryea. “The need for trimming and providing stability disappears.”

This will make it easier to recruit less experienced pilots – more pilots are needed to upscale to the volume of services many industry analysts predict. Volocopter is working with EASA to define a competency-based pilot-training syllabus.

“There is less need to aviate than on legacy aircraft, even in failure cases,” Reinhardt concurs. “But the pilot remains an active commander of the flight-path.”

The Lilium Jet exemplifies Fymat’s third, vectored-thrust configuration. Some 36 electric ducted turbofan engines are mounted on its wing-flaps. During take-off they point downwards, pushing the aircraft upwards. Once airborne, the flaps tilt to the horizontal, providing forward acceleration coupled to wing-generated lift.

Lilium has partnered with Lufthansa Aviation Training to develop a pilot-training program which makes use of virtual and augmented reality.

Honeywell Aerospace has created an urban air mobility research laboratory at its headquarters in Phoenix, Arizona. “It’s a complete simulation environment – a cockpit with the actual fly-by-wire system,” says Fymat. “We use it to evaluate avionics software and new pilot-machine interfaces.”

A primary focus is what Honeywell terms simplified vehicle operations. “Simplification boils down to two things – the user interface and how you control the aircraft,” Fymat explains. “The vehicle must be safe, intuitive and simple to fly to attract a large pool of pilots and scale operations.”

Fymat believes certification rules must still be stabilized. “Requirements need to be nailed down to provide a high level of safety without killing the business-case,” says Fymat. The business case also depends on better propulsion system-energy density to optimize single charge range or payload. “There’s no one holy-grail battery chemistry,” he says. “Energy densities increase by 7% per year. Developers are designing vehicles to accomplish missions with current technology but be adaptable over time.”

Further off, Fymat foresees challenges in building sufficient vertiports to upscale services and certifying autonomous decision-making aircraft. But this much seems sure. EVTOLs are coming soon – to a sky near you.

The VoloCity is Volocopter’s fourth-generation eVTOL and is intended for EASA certification and commercial air-taxi deployment. The 18-rotor multicopter is powered by nine batteries and offers 22 miles (35km) of range and a 70mph (110km/h) top-speed. Redundant systems ensure safety and its networks use fly-by-light optic cable. Failsafe fly-by-wire controls mean it holds position even if an aviator relinquishes the stick. 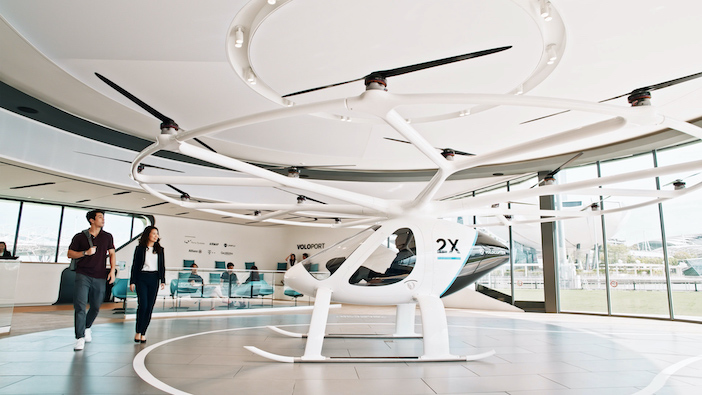 A Volocopter prototype on display in Singapore

“The VoloCity is tailored to the inner-city mission,” says Volocopter’s head of certification and quality, Oliver Reinhardt. “Purely multirotor lift with only marginal aerodynamic lift-contributions make sense when we spend most time in climb-out, hover and descent.”

The VoloCity’s urban focus contrasts with German competitor the Lilium Jet, a vectored-thrust transition eVTOL for regional air mobility. “Our rotors are fixed with no pitch-adjustment; we just control the motor rpms,” Reinhardt says. “That means a fairly simple architecture and control algorithms, which supports our certification timeline.”

Volocopter has been conducting test-flights since 2011. “Quite some lessons were learned,” says Reinhardt. “The VoloCity has a horizontal tail, which generates a nose pitch-down moment to improve efficiency in forward flight. Because it’s heavier, we have thrust-reserves to compensate for more potential failure situations.”

Jaunt’s Journey eVTOL is a compound rotorcraft whose rotor slows once aloft. “We offload lift to the wings, which carry the aircraft’s weight in cruiseflight,” Peryea explains. “Slowing the rotor reduces drag and eliminates the vibration normally experienced.”

According to Jaunt, the Journey has a lift-to-drag ratio five times better than a helicopter’s, increasing its energy efficiency while enabling it to reach speeds of 275mph (440km/h) speeds.

ROSA is a suite of technologies. “Patented technology allow us to modulate rotor rpm over a large operating-speed,” says Peryea. “We maintain the rotor stability by adding tip-weights, which must be forward of the blade’s aerodynamic center of pressure. Their weight and location is patented.”

“Electric motors mounted on the same axis as the pylon enable us to tilt forward and aft. It also provides a broad center-of-gravity range, so we can put passengers or baggage anywhere on the aircraft.”

Compound helicopters, notably the Fairey Rotodyne, were pioneered in the 1950s. “Jay Carter at Carter Aviation demonstrated the ability to change main-rotor operating speed and simplified rotor controls,” says Peryea. “He built two aircraft to work out the mechanics and aerodynamics of controlling rotor-speed in flight. But only the advent of electric propulsion has made Carter’s technology plausible for urban air mobility.”

Carter Aviation is a shareholder in Jaunt, which acquired its patents in 2019, and the Journey is based on Carter’s Personal Air Vehicle (PAV) gyrocopter. But whereas the PAV was reliant on jump take-off, the Journey’s powered rotor adds helicopter take-off and hover capabilities.