The president and CEO of AUVSI will be happy to see you now that XPONENTIAL™ is live from Atlanta.

Brian Wynne positions the Association for Unmanned Vehicle Systems International (AUVSI) as “the world’s largest nonprofit organization dedicated to the advancement of unmanned systems and robotics.” More than 7,500 members from more than 60 countries are involved across government, industry and academia. AUVSI members work in the defense, civil and commercial markets.

CEO/President Wynne has been with AUVSI since 2015, drawing on previous leadership experience with electric drive, intelligent transportation and automatic ID organizations. He serves on three FAA committees and councils, which were meeting repeatedly even as he and his team were ramping up XPONENTIAL.

After two live-event postponements during 2020, AUVSI hosted a virtual gathering this May. On the day we spoke, Wynne had just flown his Socata Trinidad from Nashville to Houston, planning AUVSI’s live meeting in Atlanta from August 16-19—even if face-to-face comes with a facemask. The schedule was still a work in progress when we talked, but Wynne noted a cross-domain triad of Technology, Policy + Governance, and Society + Public Acceptance. More than 100 speakers have been recruited, also covering ecosystem integration and infrastructure, market strategies, platforms, hardware and software.

Throughout our conversation, Wynne vigorously addressed the hot-button issues that would be discussed from the podia, at the booths and through networking among what he repeatedly called “the community.”

We’re super-excited, and I mean not just my team. All the customers we’ve been in touch with are saying the same thing—people just are really eager to get back together. And I’m right there with ‘em. I’ve been traveling like a fool since I got double-vaccinated.

Virtual and live are two completely different programs. We literally have an entirely new lineup. Most of these ideas come from the members themselves, and we try and synthesize them as best we can, and put a program together that [also] features people from the user communities as well, and the technologies.

People wait till the absolute last second to register—that’s even more true in virtual-land—but we typically have 8,000 people show up live. We have very good participation from the people who are coming to exhibit. Where you’re going to see reductions are in participation from overseas, although happily we’ve been able to fill in a lot of that during the virtual events. We’ve had a lot of people participate that were completely new to XPONENTIAL.

We see people coming together and we see that real community of energy. 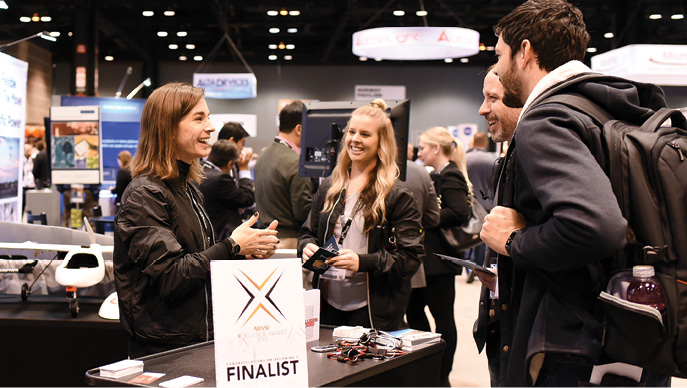 The theme we’re trying to put out there is “assuring autonomy.” Increasingly, XPONENTIAL’s uniqueness is as a multi-domain event, and that the community is really focusing increasingly on enabling technologies, not so much domain-specific applications. There’s still plenty of that, of course, but we’re trying to look over the hill and really challenge the community to work together to address emerging challenges that we’re not quite on top of yet.

Everyone has been very concerned for several years about public acceptance. During COVID, we as a community got very good marks because our technology plays from strength in an environment where you need a more robust supply chain, where you need to keep people socially distanced. But the challenges we’re seeing with cyberattacks and ransomware and things like that is that much of what has proliferated in the IT world was not really done with tremendous security. We’ll really struggle to get to scale and get the ubiquity with our technology applications if we can’t assure people that this machine is going to do what we’ve told you it’s going to do, and it’s going to do it safely, it’ll keep your data safe, it won’t be spoofed or hacked. If you’re going to put me in a car with no steering wheel or pedals, make sure nobody can hack that thing.

We have to execute this technology really, really well. We need to keep vehicles separate from one another with high levels of fidelity. There’s a responsibility that, increasingly, the regulators are pushing down to the industry, basically saying, “Well alright, how are you going to do this, show me that it’s going to be safe?” And we’re asking them to set performance-based regulations at a level where we can keep jumping over that bar with better and better technology. If we can do that, we will win the hearts and minds, and gain the trust, of the public.

To me this is the real theme. I started talking with Cara LaPointe at Johns Hopkins about this—she’s a terrific and very smart lady—at the Institute for Assured Autonomy—that’s kind of where this concept came from (for more on LaPointe’s work, see insideunmannedsystems.com/five-good-questions-cara-lapointe/). Now we’re going to put that out to the community. 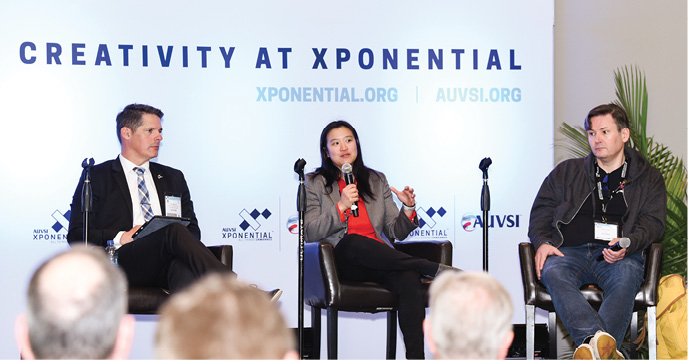 Enabling technologies to go across domains is kind of the way. For me, artificial intelligence is really important as an enabling technology. Other contiguous technologies like wireless, particularly 5G, that’s obviously going to play in multiple domains as well. On the maritime side of the house [autonomy’s] become a very robust discussion inside the Navy. We don’t necessarily see the funding rolling out yet, to where it’s really going to drive scale.

FAA AND THE NATIONAL AIRSPACE

If pressed, beyond visual line of sight truly is the Holy Grail. The FAA just launched a beyond visual line of sight aviation rulemaking committee—BVLOS ARC. I’d sworn off doing ARCs after I don’t know how many of them; this is really important. The first meeting was literally announced by the FAA administrator at the last event we did, the FAA UAS Symposium, at the beginning of May.

We did a remote identification ARC four years ago and we just got that rule coming into play. I said to the administrator the other day, “This has got to move a lot faster.” And I think it can. We have a lot of beyond visual line of sight operations going on right now, but they’re being approved one at a time, which is clearly no way to regulate.

I’m also on the Management Advisory Council for the administrator—I was appointed three years ago and I’ve been the only person from the unmanned systems community. I’m a commercial-rated pilot who uses the airspace a lot, so when we talk about 737 Max issues I’m a full participant in those discussions as well. Half of it is just understanding that we are not the only new entrant. The cadence of space launch is just increasing incredibly. We’ve got supersonic coming back. So it’s been really valuable for me to kind of see the senior-leadership point of view at the FAA. How’s my community being received? What else is going on in their orbit that they’re trying to integrate this into? What challenges do they have with Congress? With their people, the traffic organization, the technologies they’re trying to implement or the data they’re trying to collect?

“Integration” is a word we throw around a lot. But in some ways, I feel like that word is increasingly being misunderstood. Beyond visual line of sight means that it’s not just drones operating in drone space without colliding with one another. It’s, “I never have to worry about a drone running into my aircraft while I’m flying alone, and you don’t either if you’re on a commercial flight.” Integration means these vehicles will be in the same airspace with one another; it doesn’t mean we are going to divide them.

The layer cake idea is, let’s have these avigation easements. This is an idea basically that will make it easier for local governments to tax drones. Let’s be clear: that is not integration. That will actually defeat integration. I have no problem if somebody’s got a pipeline or a high voltage line on that right of way. I do have a problem with that becoming the objective of beyond visual line of sight, and we’re going to do it this way in this town, and we’re going to charge drones this much to use it. Meanwhile, the rest of the national airspace is trying to figure it out. That’s not integration, and that’s not the way we do things in aviation, and it’s not legal.

I’m not saying that state and local authorities shouldn’t have some say over where drones can overfly and what they shouldn’t overfly, if it’s a schoolyard full of kids out during the noon hour. That’s a whole different question. First and foremost, we have to have the ability to have drones integrated with manned aircraft in the airspace at the federal level under federal regulations, and everything else would happen under delegated authority. This is a really interesting moment on this subject.

It’s what’s kept me in this career for so long: a community like the unmanned systems community, where we’ve got brilliant startup folks, we’ve got huge logistics organization, we have the ability to be where people can sit down at the same table and look at a problem from different angles and bring their energy to it. You see that happen at XPONENTIAL. I’ll pay attention to who’s talking to who in the hallway, and then four months later I’ll see a new partnership announced.

We don’t exist if people don’t associate with one another. We just make it easy for them to do that. We have been doing an awful lot in the arena of diversity and inclusion, because it’s going to make us a stronger community. Now, there’s been a conscious effort to encourage more diversity on the AUVSI board, and we’ve had some success. We have been thinking more and more about how we’re creating a community that people want to participate in and see themselves in. Technology communities have not been super-great at this, let’s be clear. We need to be very mindful and conscious and proactive in this respect.

We’ve started reviewing everything we’re doing operationally from a DEI [diversity, equity, inclusion] perspective. What contractors are we utilizing? How are we putting together everything in the program, from the keynotes all the way on down? Virtually we were able to recruit a lot more diverse speakers; candidly, it was easier because people didn’t have to travel. You’ve got to work on it very consciously. You have to think about your pipeline.

It’s super-gratifying to see what works. I’m trying for a change in the way we operate and the way we think for the long haul.

THE SPIRIT OF INNOVATION

One of my board members is building cars for the Indy autonomous challenge. If you go all the way back with Indy, the whole idea was, let’s test things out, let’s break them and then make them better. You don’t want to necessarily be breaking things in the airspace, but to me, this is the spirit of innovation that is so exciting. It’s impossible to be around people like that and not either be completely fascinated and curious, or sometimes at the same time very, very intimidated.

That’s my day, pretty much every day.