A person wearing a protective suit collects a cooler from a drone, which usually carries blood samples to be tested for Covid-19, on July 28, 2020 outside DOROT, Netanya Geriatric Medical Center, in the central Israeli city of Netanya. Amid the novel coronavirus pandemic crisis, the Israeli Ministry of Transportation started a pilot project “Remedy from the sky” program, drones for delivery of payloads including medical items like blood samples and medicines; Images: GIL COHEN-MAGEN / AFPFive years ago, in 2016, a nationwide drone delivery programme for medical supplies was launched in Rwanda. In March 2021, the world’s first drone delivery of Covid-19 vaccines took place in Ghana. Even as the global pandemic has only made discrepancies in the medical supply chain more evident, African countries, according to the World Economic Forum, are showing the rest of the world the social and economic value that can be provided by this technology.

Improving the medical supply chain, especially in rural areas, is necessary and countries like Rwanda, Ghana, the US and Israel are great case studies for how India can also start using drones. Rural India has been severely hit by the second wave of the pandemic and the need for medical supplies and vaccines is immense. A recent report by SBI Research pointed out that between March and May 2021, the percentage of rural districts with Covid-19 cases across India surged from 36.8 to 48.5.

Even as the global medical drones market size is expected to reach $947.6 million by 2027, expanding at a CAGR of 6.5 percent over the forecast period according to reports, India isn’t too far behind in using this technology—both central and some state governments are working on ways to improve medical supply chains in India via drones.

On June 11, HLL Infra Tech Services Limited—a subsidiary of government-owned HLL Lifecare which is procuring all vaccines in the country for the government—invited an Expression of Interest (EoI) for delivery of vaccines and drugs by Unmanned Aerial Vehicles (UAVs) on behalf of the Indian Council of Medical Research (ICMR). According to the EoI, ICMR is looking for UAVs that can travel up to 35 km with supplies of 4 kg and fly at an altitude of at least 100 meters, “to reach inaccessible (hard to reach) areas to cover last-mile coverage at difficult terrain in selected locations”.

While this is at a preliminary stage, the ‘Medicine from the Sky’ project’, an initiative by Telangana government and World Economic Forum, is likely to start trials for vaccine delivery by the end of this month. Though the project was conceptualised in late 2019, it was only around March 2020 that the EOI—inviting drone operators’ participation in the trials—was launched.

The project hopes to serve different districts of Telangana for medical supplies to create a large-scale impact. In order to ensure there is an end-to-end drone delivery system, Jayesh Ranjan, IAS, principal secretary, ITE&C department, government of Telangana says, “The EoI required consortium submissions to ensure the capabilities of a UTM service provider, cold chain expert, and healthcare expert were present in addition to the drone platform. Out of the submissions received, we have shortlisted eight consortia fit to undertake these trials.”

The Ministry of Civil Aviation (MoCA) and Directorate General of Civil Aviation (DGCA) have granted conditional exemption to the government of Telangana for conducting experimental Beyond Visual Line of Sight (BVLOS) drone flights—which are otherwise not permissible—for delivery of vaccines. All the pilots will take place in an identified airspace in Vikarabad district.

One of the drone manufacturers shortlisted is Delhi and Bengaluru-based Skye Air Mobility, which is a part of two consortiums—Blue Dart Med-Express Consortium and Dunzo Med Air Consortium. “We are expecting trials to start by the end of this month. Within three weeks, all the consortiums will be able to demonstrate their technology by picking up and dropping off medicines and vaccines between 16 Primary Health Centers and the Vikarabad District Health Care Center,” says S Vijay, Wing Commander (Veteran), COO, Skye Air Mobility who has worked with drone technology since 2002 in the military. Skye Air’s drone can carry a payload of close to 5 kg, which would mean a lot of vaccines can be packaged. “Currently, however, the challenge is maintaining the temperatures for the vaccines. To monitor the same, digital temperature loggers—a light-weight IoT device, attached to the vaccine carrier being transported—will be attached to the carrier,” adds Vijay.

Another startup, Hyderabad-based Hepicopter, has come up with two different drone models—one with a payload capacity of 10 kg and the other with a payload capacity of 5 kg. “The one with a capacity of 10 kg can deliver 2,000 to 3,000 doses of vaccines in a single flight, and has a maximum range of 15 km. The other has a range of 80km and can carry up to 1,000 vaccine doses,” says Prem Kumar Vislawath, founder, Hepicopter. The team is working with IIT Guwahati, Research and Innovation Circle of Hyderabad (RICH) and Public Health Foundation of India (PHFI) as consortium partners. The delivery works on a hub-and-spoke model. Vislawath adds, “When the team gets a message on the inventory needed, it is loaded at the central hub and the drones take off. The coordinates are fed into the systems and the health examiner picks up the vials at the drop-off point.”

Bengaluru-based Redwing Aerospace Labs—also working on the Medicine from the Sky project—has developed a hybrid vertical takeoff and landing (VTOL) drone. “It doesn’t look like a conventional airplane, but has four motors and a fixed wing so that it can transition mid-flight and gain that range,” explains co-founder Rishabh Gupta who first developed this prototype in 2018. They used these drones in Papua New Guinea to deliver polio vaccines for an organisation called WeRobotics and also work with the US Centers for Disease Control and Prevention and the Gates Foundation. “The idea was to showcase how vaccines can be delivered in far-flung areas to the stakeholders,” says Gupta.

There was a lot of wastage of vaccines, primarily due to supply chain issues. According to Gupta, “Before drones were being used, they [African countries] were wasting about 6-8 percent of their blood because of supply chain issues, just like what we are facing with vaccines. Using drones, this wastage was brought down to 0.1 percent.” Currently, Redwing’s drones can travel to about 50 km, carrying a 2 kg payload at 95 km per hour. 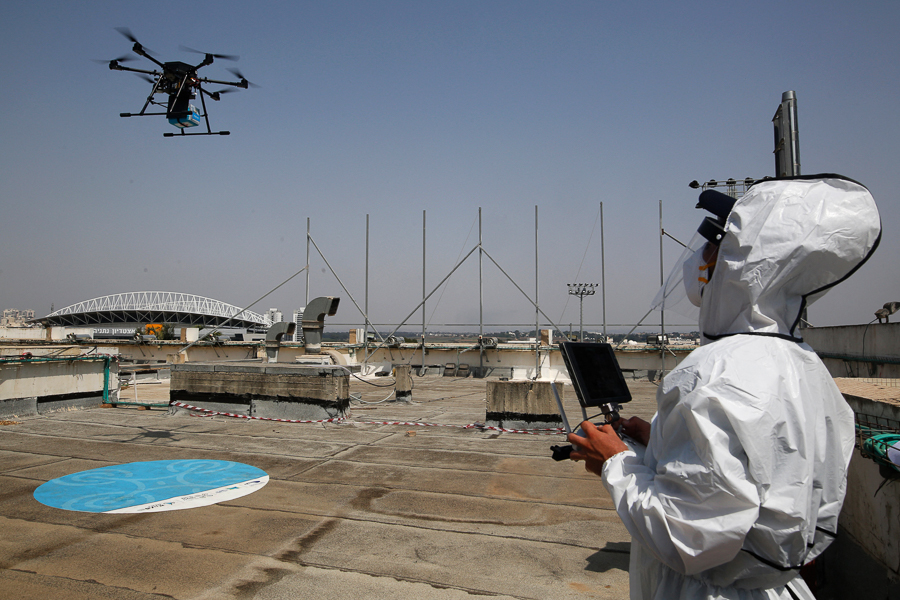 Even as the global medical drones market size is expected to reach $947.6 million by 2027, expanding at a CAGR of 6.5 percent over the forecast period according to reports, India isn’t too far behind in using this technology; Images: GIL COHEN-MAGEN / AFP

One of the other shortlisted companies includes quick commerce and logistics platform Dunzo. The startup will focus on providing a proposed operating model that integrates with the current health supply chain of the state of Telangana and makes a business case for cost-effectiveness while promoting better health outcomes for citizens in the shortest span of time. “Based on the assessment conducted by the consortium, there is an opportunity to reduce the average delivery cost by 1/3rd of its current value, when we deploy and operate the drone model at scale. Plus, at that same time bring more efficiency in the complete process of transportation,” says a Dunzo spokesperson.

Blue Dart is another logistics player that will be a part of the project, to help eradicate any gaps in the supply chain and deliver critical medical aid where last-mile logistics has limited accessibility. Apart from Covid-19 vaccines, these consortiums will also deliver units of blood, diagnostic specimens and other lifesaving equipment. “The Unmanned Aircraft System (UAS) or drones can handle our specialised Temperature Controlled Shipments with a payload of up to 2 kg. Our efforts will enable deliveries from district medical stores and blood banks to primary health centers (PHCs), community health centres (CHCs), blood storage units and also from PHCs/CHCs to central diagnostic laboratories,” says Ketan Kulkarni, CMO & head–business development, Blue Dart. The company hopes to extend its service to areas that are shadowed by heavy forest cover or areas situated in hilly regions such as the North East which require a more robust logistics route to upgrade their healthcare accessibility.

At the end of the trials, the objective is to generate insights that can drive future adoption strategies and policy interventions. “The success of these trials would establish the reliability and the feasibility of drone technology for healthcare deliveries and thus would drive organic adoption,” adds Ranjan. The UAS market in India is projected to touch $886 million by 2021, while the global market is likely to touch $ 21.47 billion, according to a Ministry of Civil Aviation report from last year. Data on the trials will be available around mid-July, which the government will take into consideration for making a policy.

Market leader and medical product delivery company Zipline has delivered over 2.5 million vaccine doses worldwide, including tens of thousands of Covid-19 vaccines to people in the remote areas of Ghana. However, this massive opportunity comes with its own set of challenges. “The rapid developments in UAS technology, with an ever-expanding array of use cases and platforms, have so far outpaced regulatory efforts to facilitate their widespread use at scale,” says Dan Czerwonka, head of global regulatory affairs at Zipline. The company has also applied to operate in India to participate in the BVLOS trials.

Czerwonka adds, “In India, as in many other countries, such efforts are built on traditional manned aviation industry principles, which did not contemplate the possibility of one day having aircraft flying overhead with no humans aboard.”

Drone delivery has been around for over five years, and the basic technology is not a challenge anymore. However, when it comes to delivering vaccines or other medical supplies a business model where there is enough return on investment would be ideal.

According to Nitin Gupta, founder and CEO, FlytBase, “Doing these missions as a free demonstration is a good first step; however, it is of course not sustainable. There has to be a clear path to sustainability, else it will remain just a science experiment.” FlytBase is a drone software products company that works with drone operators in North America, Latin America and Europe. Gupta plans to expand to India once necessary approvals are provided and a viable business model can be built. “Regulators need to work closely with operators in an agile manner, instead of coming up with a fool-proof set of regulations in one shot which will take months/years and will still not be perfect,” he adds.

Though government bodies are bullish about drones being used to deliver vaccines and other medical supplies, the question is how long will it take to become a reality? Dr HSN Murthy, professor and head, department of aerospace engineering, IIT Madras believes, “Currently, equipment is available. The question is how long the other procedures will take. However, given that there is a sense of urgency to this situation things might be fast-tracked, which means it could turn into a reality sooner than later.”

Click here to see Forbes India’s comprehensive coverage on the Covid-19 situation and its impact on life, business and the economy​