Slated to open in 2024, the more than 720,000-square-foot facility will move twice as much grocery product — including perishables such as produce, eggs, dairy, flowers and frozen goods — in supplying area stores via a combination of manual labor and automation, robotics and machine learning technology, Walmart said yesterday.

Related: Walmart kicks off delivery service for other businesses

“Walmart’s high-tech grocery distribution center will include game-changing innovations that are radically disrupting the supply chain, getting products onto shelves for our customers even faster while saving time for our associates,” David Guggina, senior vice president of automation and innovation at Walmart U.S., said in a statement. “We’re proud to be opening Walmart’s largest automated grocery distribution center in Spartanburg County and look forward to bringing new STEM job opportunities to the region.”

In July, Walmart unveiled plans to automate more than half of its regional distribution centers under a partnership with Symbotic.

“We’re thrilled to bring our high-tech grocery distribution center to the thriving logistics hub of Spartanburg County,” commented Tim Cooper, senior vice president of supply chain operations at Walmart U.S. “The new distribution center will be critical to ensuring our stores are stocked with the freshest grocery items to provide convenience and quality at everyday low prices to customers and communities in the state of South Carolina.”

Walmart’s announcement of the new high-tech DC comes three months after the company unveiled plans to automate 25 of its 42 regional distribution centers (RDCs) with robotics and other automation technology from Wilmington, Mass.-based Symbotic. The scalable system uses a fleet of robots and proprietary software to improve throughput and expand warehouse capacity, cutting the time it takes to unload, sort and stock freight at Walmart stores, the companies said. 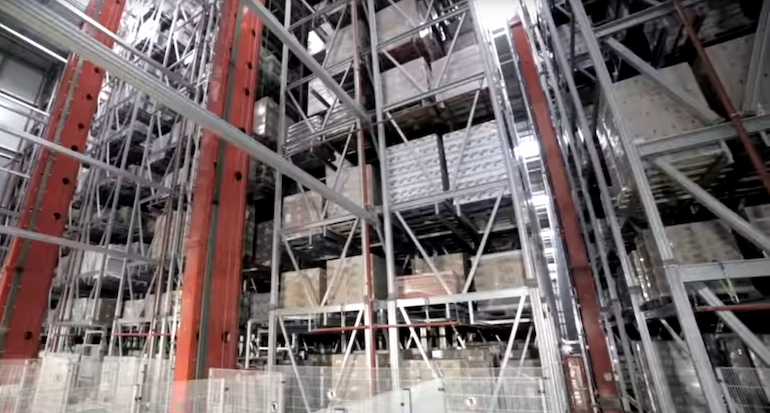 Symbotic first implemented its system at Walmart’s RDC in Brooksville, Fla., in 2017. Since then, Walmart has worked with Symbotic to test the technology and optimize its use at the facility and other locations. The pilot builds on supply chain advances achieved from automation projects at Walmart’s high-tech consolidation center in Colton, Calif., and its high-tech DC for fresh and frozen groceries in Shafter, Calif., which have reduced handling costs and improved service to stores and customers.

Walmart noted that it also has invested in drone technology, including from Virginia Beach, Va.-based DroneUp and Israel-based Flytrex, as well as in autonomous vehicles to support last-mile deliveries.

The latter includes a range of partnerships, most recently with Ford Motor Co. and autonomous vehicle developer Argo AI to launch a self-driving vehicle delivery service in Miami; Austin, Texas; and Washington, D.C. This past April, Walmart said it invested in San Francisco-based Cruise, a majority-owned subsidiary of General Motors, to use Cruise electric-powered autonomous vehicles for last-mile delivery. The move followed a pilot with Cruise’s self-driving vehicles announced last November and begun early this year.

In 2020, Walmart tested the unmanned Nuro R2 delivery vehicle in Houston to bring online grocery orders to customers’ homes. And in July 2019, Walmart announced it was working with Gatik on a “middle-mile” logistics pilot using the tech startup’s self-driving Ford Transit Connect vans to help move goods from the Walmart Supercenter in Rogers, Ark., to a Walmart Neighborhood Market in nearby Bentonville. That test shifted to fully driverless Gatik vehicles earlier this year.